The thing about Coachella is that anyone could be famous if they’re wearing the right outfit. Slap on some tiny sunglasses, an elaborate braid of colorful extensions, and some sort of see-through overlay, and you could either be looking at Halsey or some random girl who works for a media company and finessed her way in. There is just no way to tell.

That random girl, by the way, was me. Hi. But I did not have the requisite diminutive sunglasses or mesh dress over a bikini, so it was probably pretty obvious that I was not anyone cool. Instead, I was wearing my beat-up Nike sneakers I got at an outlet a few years ago that were covered in Indio dust, a red lace-up Maaji bikini, and some lace-up white shorts from Mystique Boutique, a chain that carries clothing of such caliber that it makes Forever 21 look like Givenchy.

Nevertheless, I pulled up in a Lyft (big ups to Lyft for throwing me free credit and also not being a super problematic company) to the Zenyara estate, a 37-acre oasis in the Coachella Valley, which boasts an 11-bedroom, 40,000-square-foot residence; working horse and date farms; a 6-acre Clive Clark–designed golf course; an enormous lake; canals; a petting zoo; horse and bike trails; pickle-ball and tennis courts; a pool and spa; and a helicopter pad. Yeah. Whoa. I was there for one of Goldenvoice and Corso Agency’s secret after-parties.It was Saturday night, there was late-night music hosted by Wynn Nightlife and Framework—this night, Idris Elba was DJing at the party. I took some Adderall so I could make it through the day and night, and I was pumped (naturally, but also because of the Adderall).

We arrived to the estate in said Lyft, which proved out to be the move because they were literally not allowing people to walk up to the venue. Some weird form of classism, I suppose? We did a whole security check deal, and the guy checking bags said “bags on the table, drugs in your pocket”, which is how you know you’re about to be among the ~elite~. If you’re not famous, they confiscate that sh*t and then threaten to arrest you unless you pay them $500 (according to a friend….).

Anyway, we checked in and walked up a hill to this mansion, where we were greeted by numerous Rolls-Royces just casually parked. I joked that that was my Lyft, and was probably the 5,000th person to do so. My friend and I walked through the doors, through a dark hallway where artwork of old school hip-hop artists graced the walls (and one seemingly out-of-place portrait of Freddy Mercury), and out onto a huge beach area. Straight ahead was a huge model of the Adidas logo, lit up and planted in the water. I looked down at my Nikes. Oh.

The actual estate itself was huge—I’m pretty sure that we didn’t even explore half of it. There was a basketball court where people were literally playing basketball (A$AP Ferg and Pusha-T competed in a basketball tournament earlier in the weekend), a live art installation by Alexa Meade, the woman who did Ariana Grande’s body paint for the “God Is A Woman” video; food trucks, and another separate pool area with I think another pool that we never even made it over to. There were also these plush couches set up in VIP areas and a stage.

The impostor syndrome set in for me pretty quickly at this after-party. Everyone seemed pretty sophisticated, and the vibe was chill, in the sense that you can sense a crescendo to craziness building, but you haven’t gotten there just yet. Idris Elba was DJing on a small stage, so people were dancing in front of it, but it was less of an insane rager and more of a cool dance party. Does that make sense? I also didn’t catch a glimpse of any celebrities, but then again, I was there early (11pm-1amish), because I had sh*t to do the next day (aka another party at the Zenyara Estate for the Adidas Sport Club).

But in any case, I walked around, took in the sights, drank from the open bar (thank you, Heineken and Ambros Banana Whiskey), and danced to Idris Elba for a bit. To see Idris up close was a dream come true, after literally two times trying to catch a glimpse of him previously (once at Output in Brooklyn, once at the Yuma tent at Coachella—both too crowded to actually see my mans with my own eyes). It is probably the coolest thing I will ever do, but I also definitely didn’t feel like I belonged. My hair was a mess from spending the whole day in the Palm Desert heat. My makeup was smudged all over my face. I was wearing SNEAKERS and not trendy combat boots like everyone else. In short, it’s a wonder I didn’t get escorted off the premises. 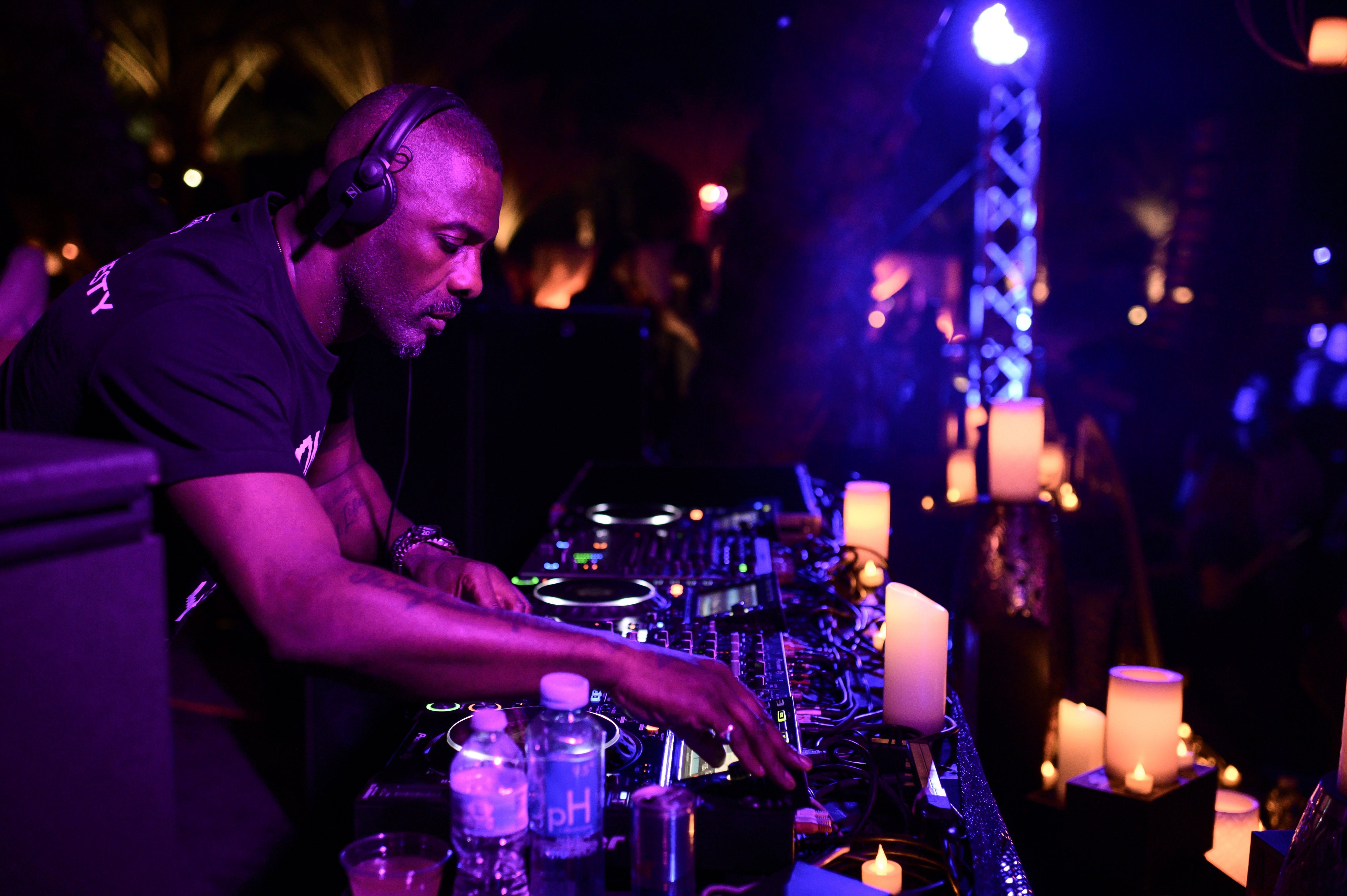 Lesson one: if you’re going to one of the best and most exclusive Coachella parties, look the part.

Lesson two: Arrive later. I feel like all the celebrities showed up later in the night. This was a theme I learned throughout the weekend—people don’t show up to places at the start of an event. However, I like to get there right at the posted start time so I can get all the free sh*t without having to deal with any of the lines. And because I get tired!

So I was back the next day for the Republic Records Coachella pre-party at Adidas Sport Club. Same venue, different vibe. There were a bunch of performers slated, including Blueface (of “Thotiana” fame—I walked by him a bunch of times), but I only cared about Jacquees (who I ended up missing because I left to go to the festival before he arrived…smh). See: lesson two.

The night party was awesome, and felt fancy, and the day party was dope too. There was a “beauty and wellness” tent that had an Urban Decay touch-up station, boozy flavor-ice, an IV drip station, and—rumor has it—Botox. I obviously partook in the booze and the makeup, but not so much the injectables, if they did in fact exist. There was also allegedly a cannabis tent, which we never found. Like I said, this estate is huge. 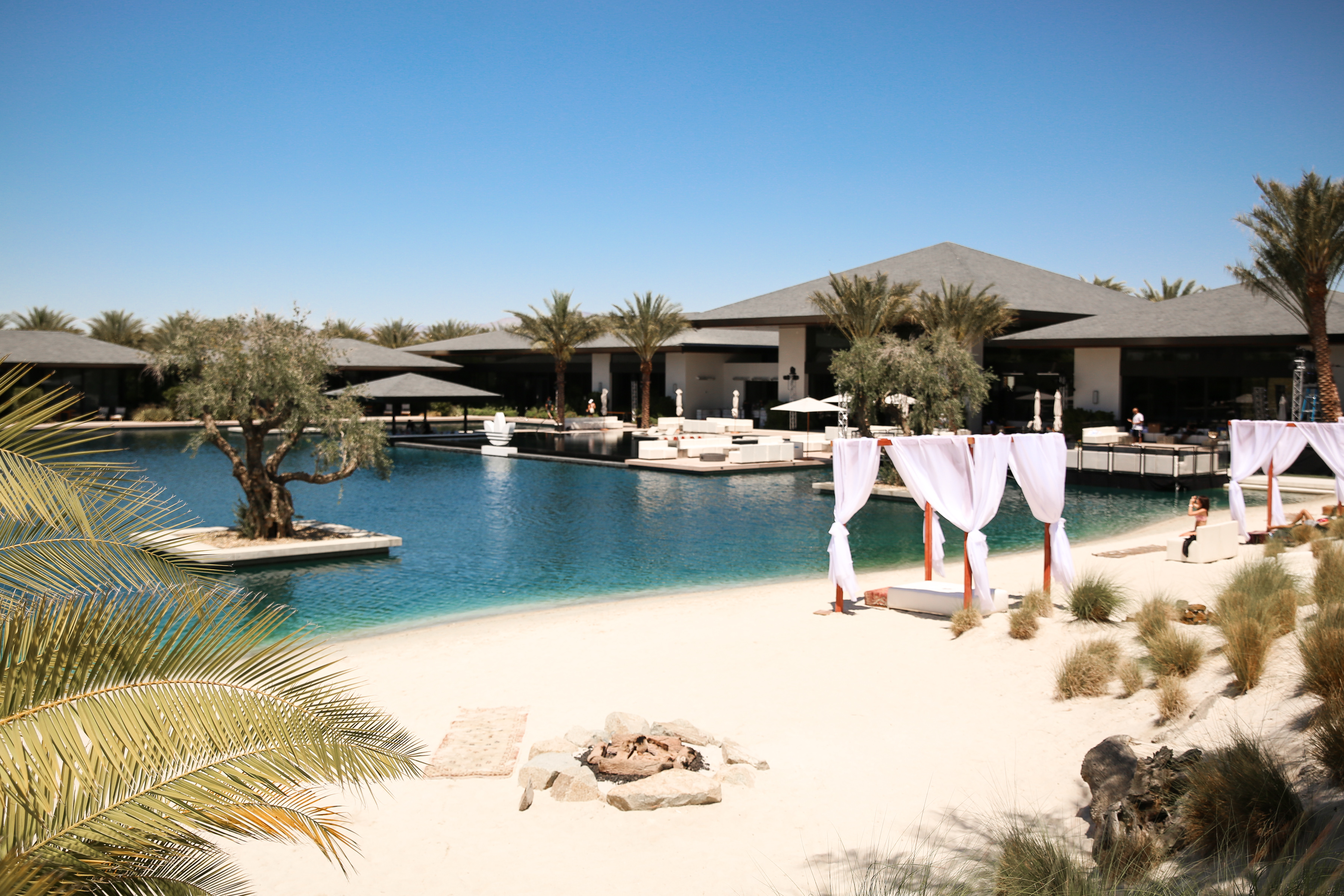 The beach looked absolutely gorgeous in the daytime—the water was so blue it was clearly fake (but great for the Instas). Ciroc was serving up cocktails inside coconuts or mini watermelons. I was living my best Instagram life (and real life—those cocktails were delicious).

And the stars. Were. Out (ish). Well, like, off-brand stars for this site, probably, but on-brand for my personal brand. I ran into Maggie Lindemann, the singer of “Pretty Girl”. She is so gorgeous and tiny in person. I also saw and tried to get a creeper shot of A-Trak, but failed because I literally can’t even use my own phone’s video camera. Also, Ronald “Slim” Williams, co-founder of Cash Money Records and Birdman’s brother, was there. I did not say hi, because I wasn’t sure who he was, but I did know he was someone famous because he was approximately 800 feet tall and random guys kept going up to him and giving him a hug and telling him how much he meant to them. As previously mentioned, Blueface was there, but I did not see him bust it down, Thotiana or no.

Basically we just walked around, lugging our watermelon Ciroc cocktails (watermelons are surprisingly heavy, even the miniature ones), picking up free stuff, and trying to discern who was a celebrity and who just had good style, without seeming like we were gawking. A major clue I deduced was that none of the actually famous or cool people were taking photos. (But then who on Instagram will believe I was there???) It’s a true catch-22 for our generation.

Overall, I live for free stuff, and being celebrity-adjacent, so honestly the Framework/Wynn Nightlife/Republic parties were among my favorite things I did all weekend. That being said, it’s not like I actually partied with celebs—more like, I partied in their vicinity, probably a few hours earlier than them, and I didn’t even know who anybody was if/when I saw them—so don’t believe everything you see on Instagram. But hey, at least I didn’t have to wait hours for a shuttle in a Wal-Mart parking lot to get there!!

So, if you want to trick people into thinking you are famous, here is what I learned: wear the right outfit—the more intricate, the better. Bring a hairbrush (it’s the only way I imagine everyone’s barrel curls stayed perfect). Do some elaborate makeup. If you’re going to wear sneakers, they better not be your gym sneakers. And, finally, live in the moment and stop taking fake Instagram candids, because if you actually got it like that, you don’t need to flex on the ‘Gram.

Everything We Know About Bella Thorne’s Book Betches