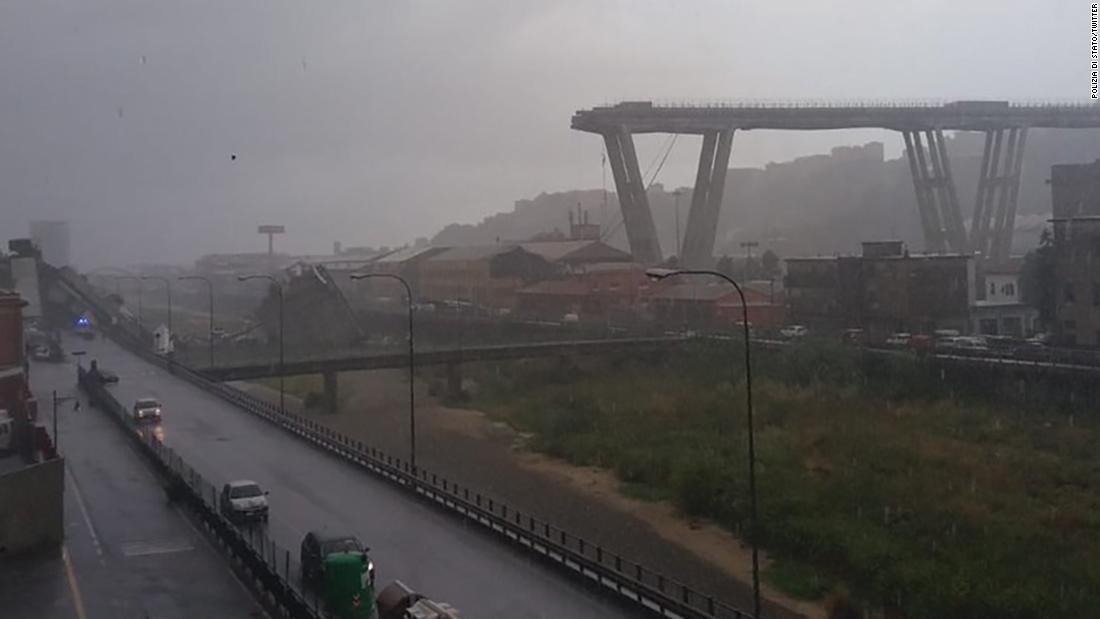 Genoa, Italy (CNN)The sound of jackhammers reverberated through the night in this northern Italian city, where crews searched for survivors of a highway bridge collapse that left about two dozen people dead, officials said.

The search-and-rescue mission is expected to last for days, Emanuele Gissi, an engineer with the country’s fire service, told state broadcaster RAI News 24. Gissi said several people remain missing.
Teams with rescue dogs are aiding the effort.
Angelo Borrelli, head of the Italian Civil Protection Agency, said about 30 vehicles and several heavy-duty trucks were on the affected section of the Morandi Bridge, which lies to the west of the port city of Genoa, when it gave way.
Prime Minister Giuseppe Conte said 22 people are dead and another 16 people were injured, nine of them in serious condition. Separately, the office of the governor of the Liguria region said 26 people have died. Genoa officials declared two days of mourning.
According to police, violent storms were partly to blame for the disaster. Maintenance work also was underway at the time to consolidate parts of the bridge, according to motorway operator Autostrade. A bridge crane had been installed to allow the work to be carried out, the operator said in a statement.
“The works and the status of the viaduct were subject to constant observation and supervision,” the statement said. “The causes for the collapse will be the object of an in-depth analysis as soon as it will be possible to safely access the site.”
Conte said authorities were working on the theory the collapse was due to a “structural failure.”
The number of casualties is expected to grow as the rubble is removed, Borrelli said, but it is unlikely that anyone was underneath the bridge at the time of the collapse, he added.
Some 440 people have had to abandon their homes following the collapse of the bridge, the mayor of Genoa’s office said in a statement. Eleven buildings had to be evacuated and the number of people and buildings evacuated could rise as risk assessments are ongoing. 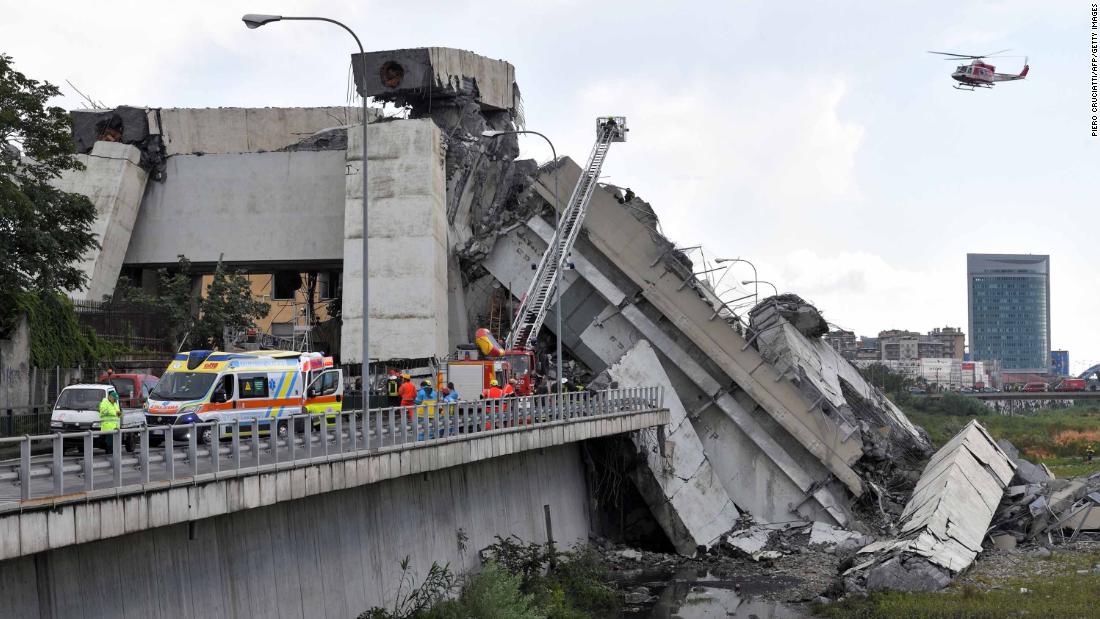 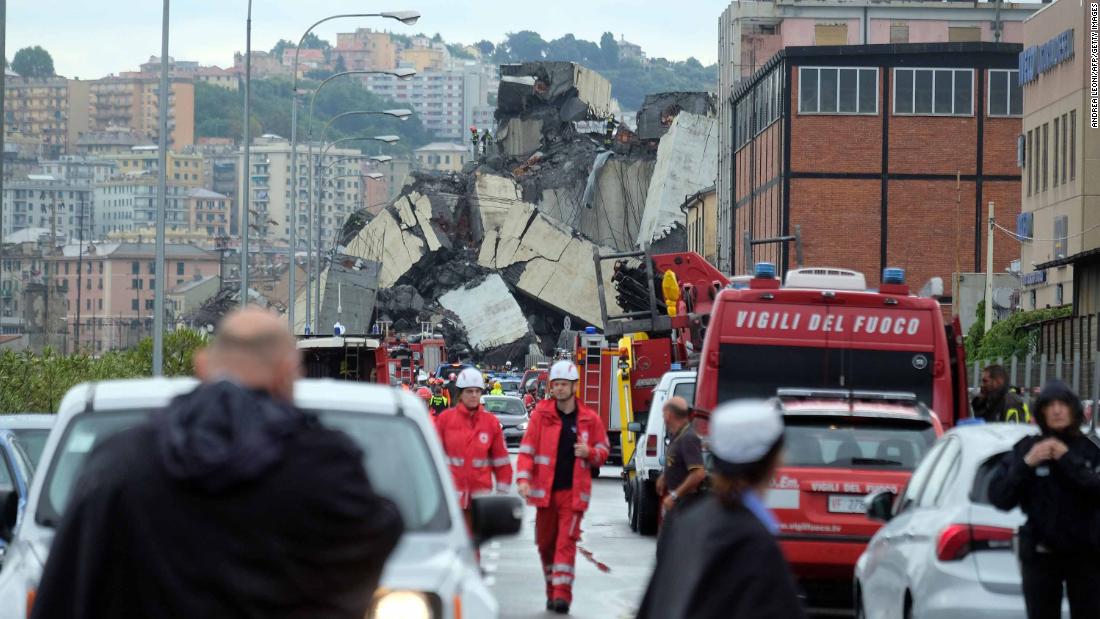 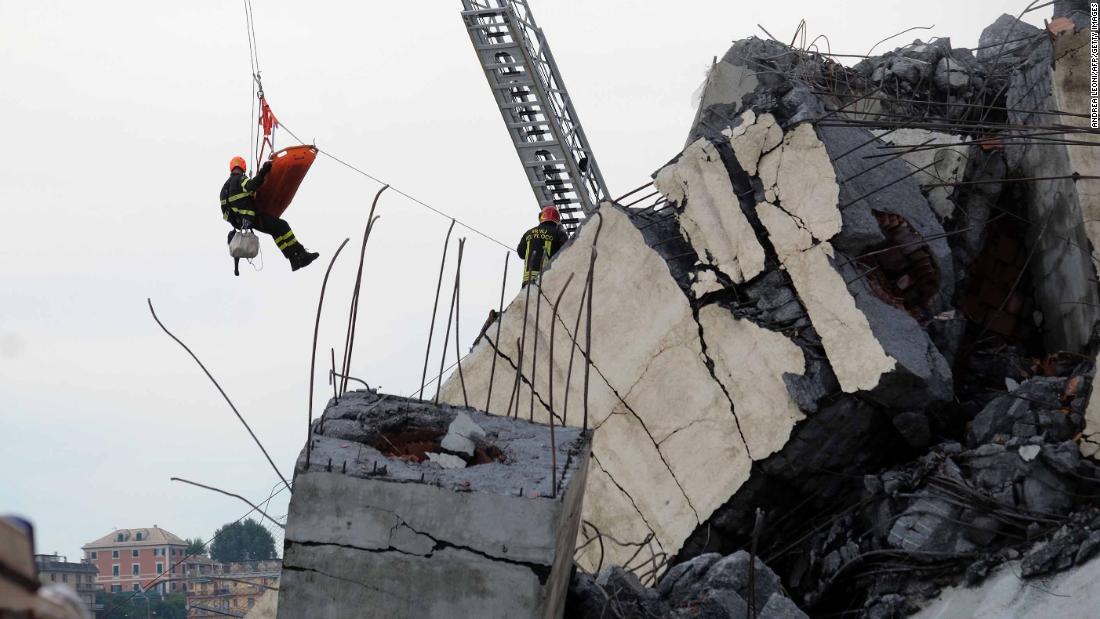 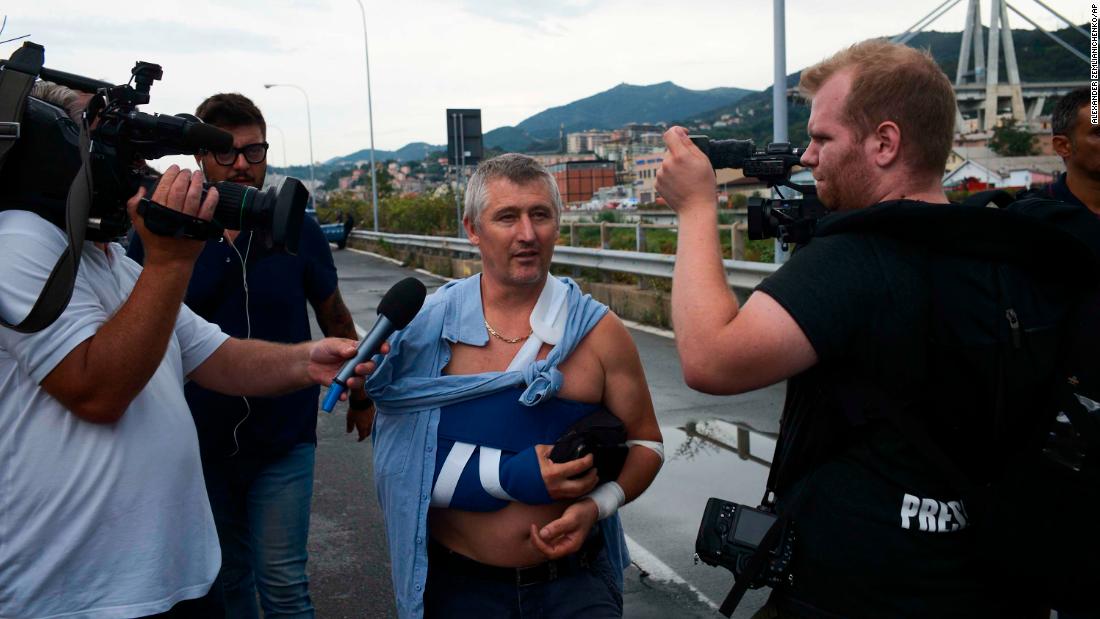 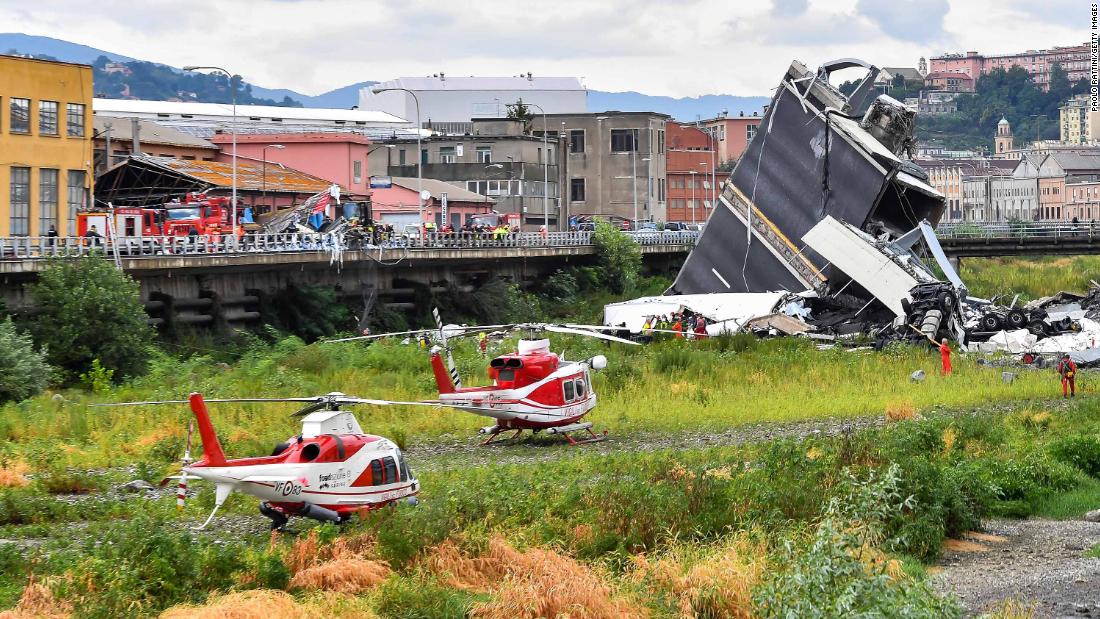 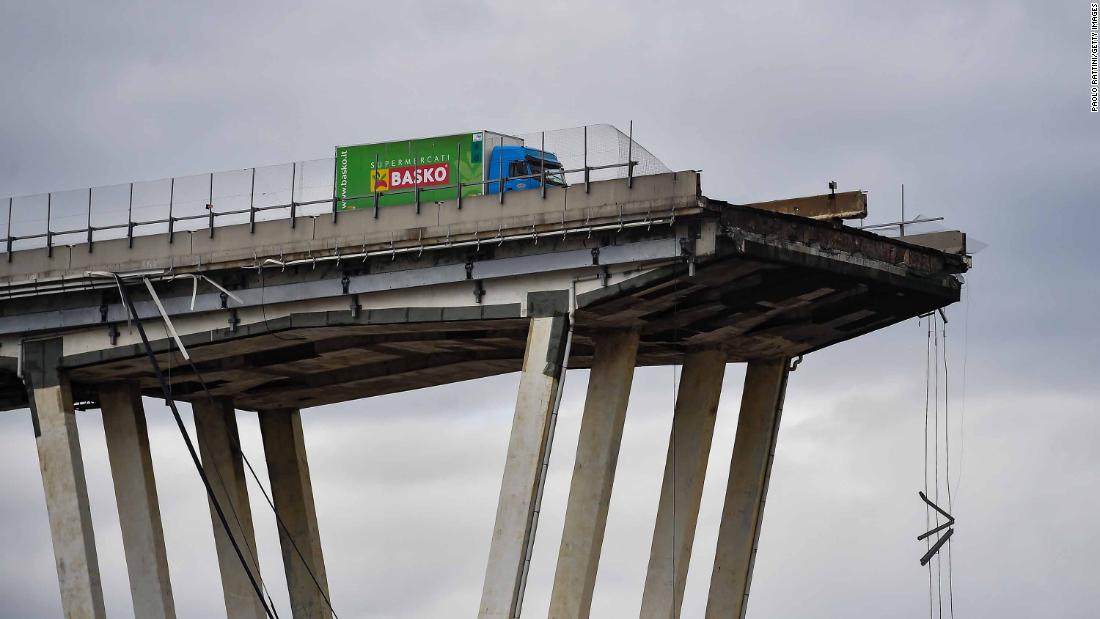 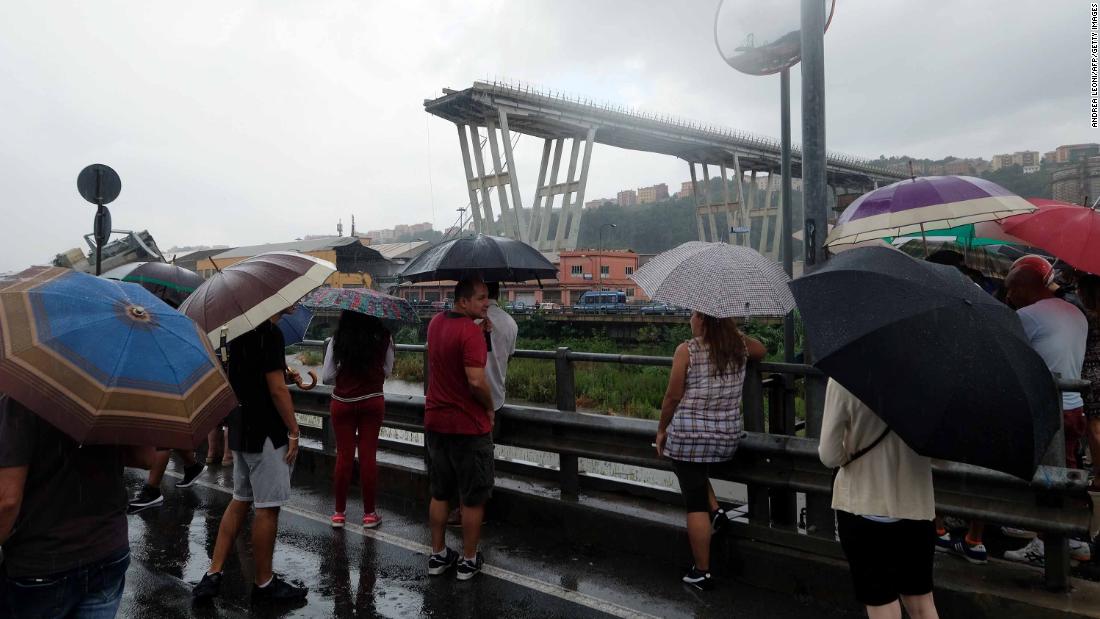 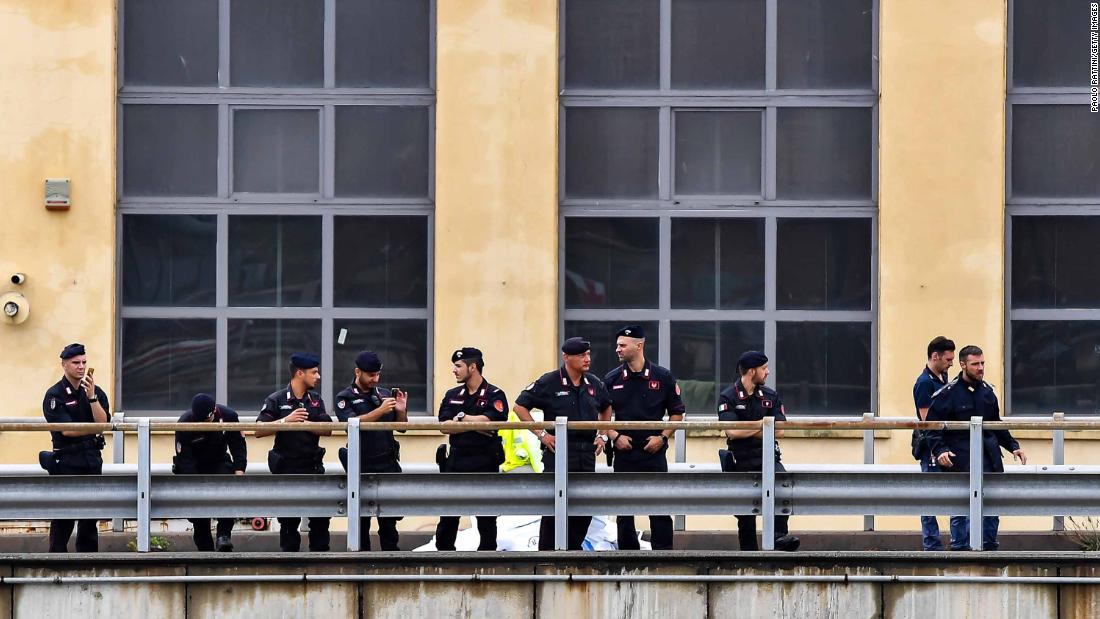 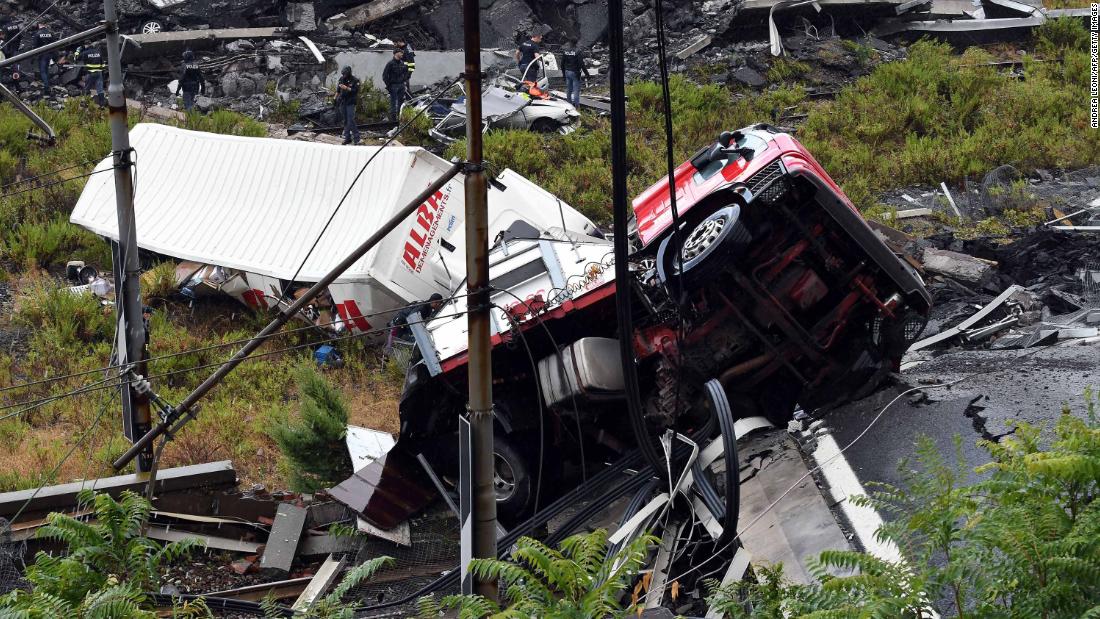 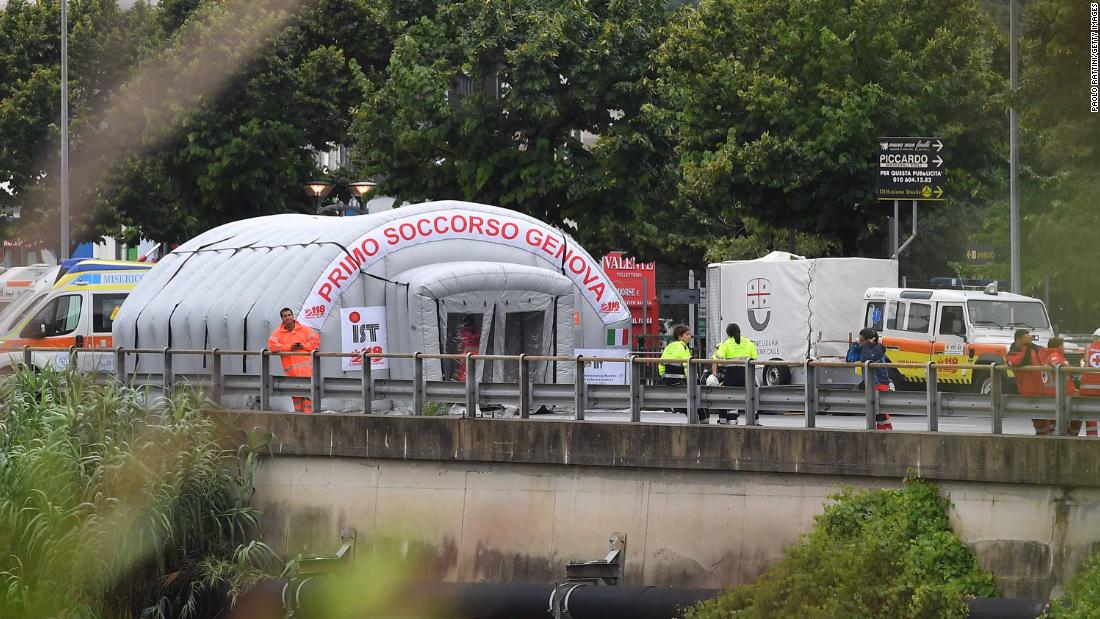 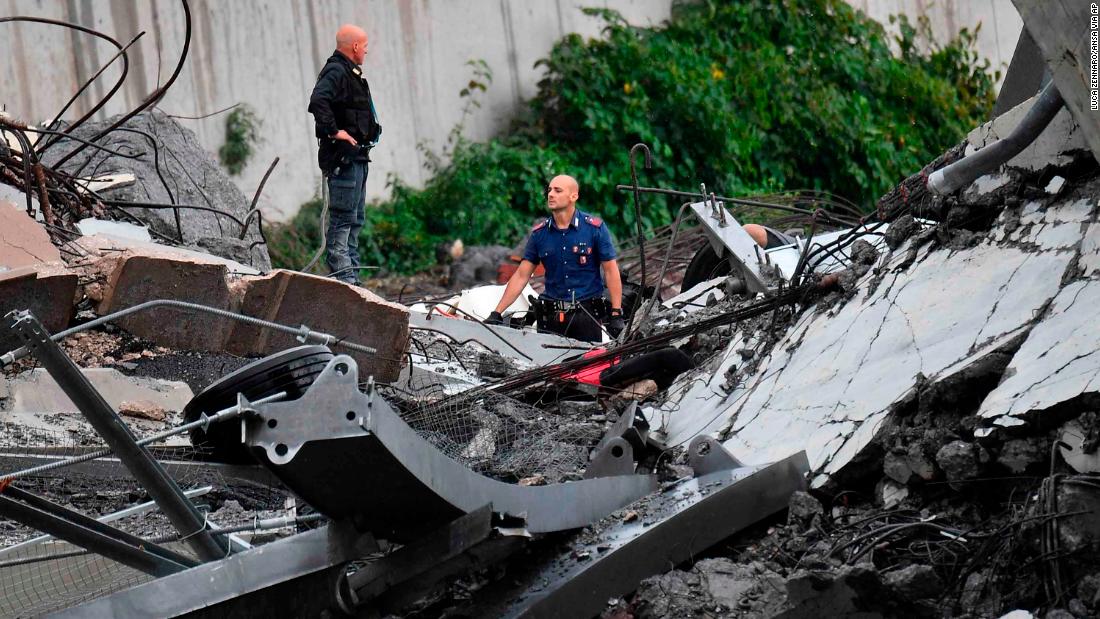 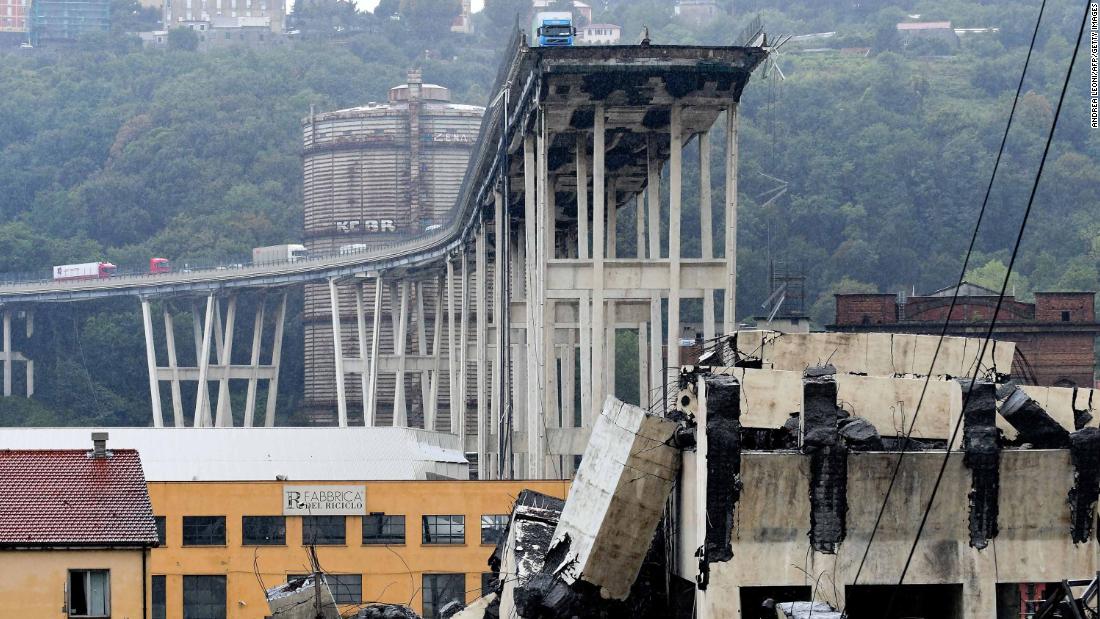 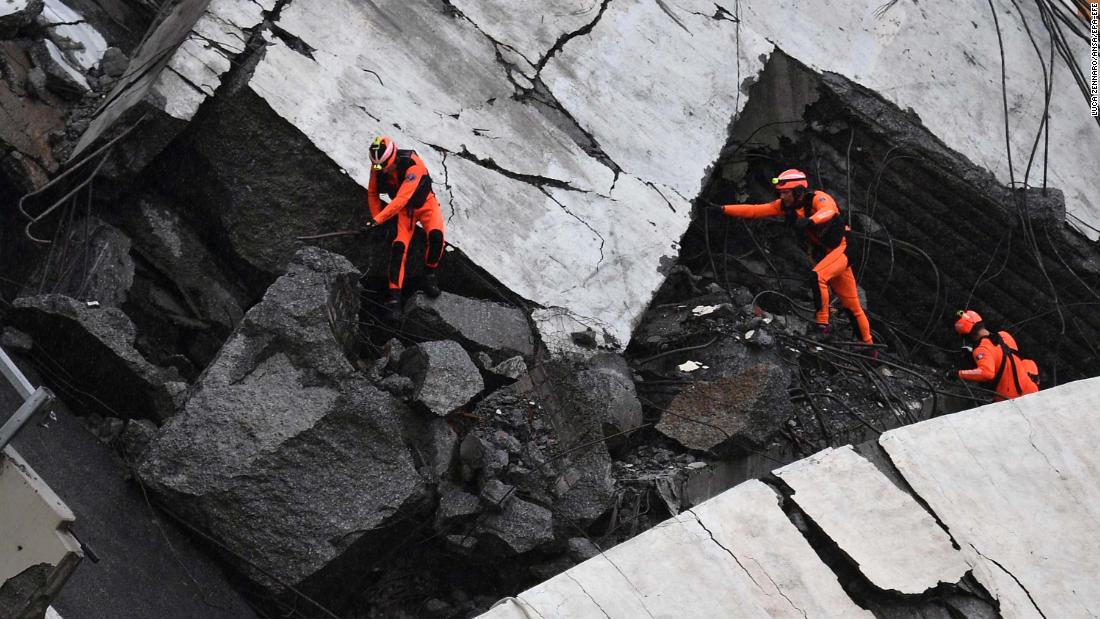 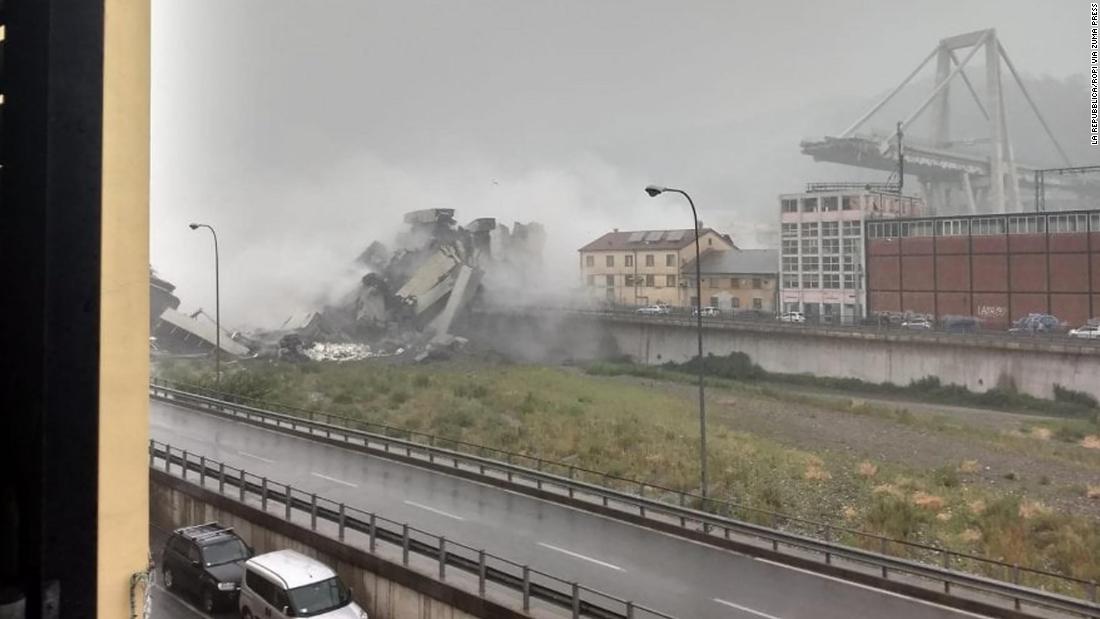 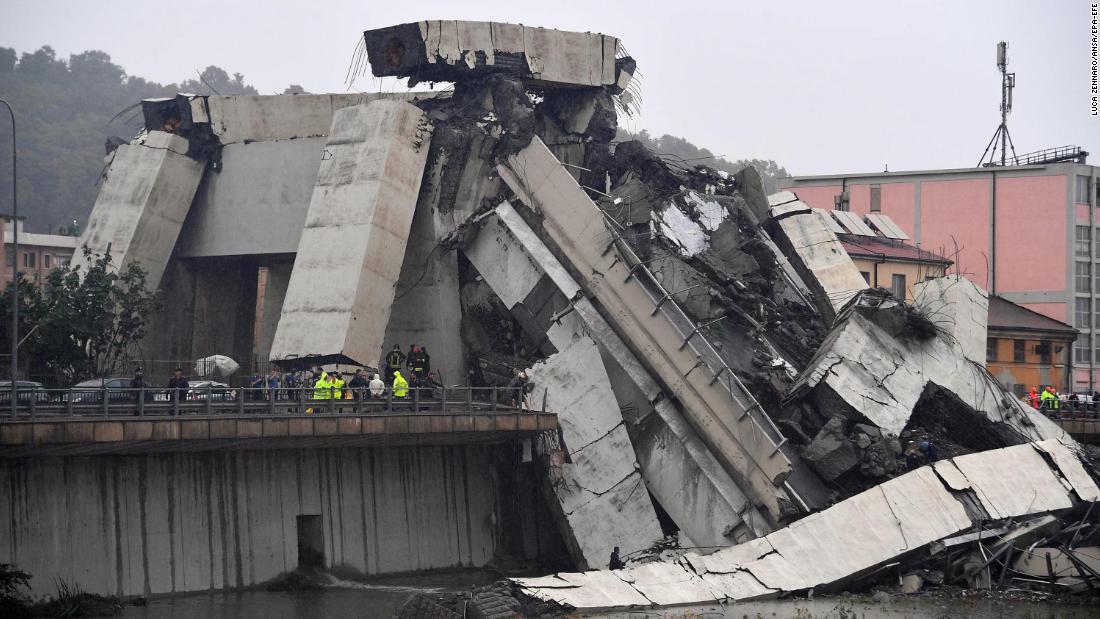 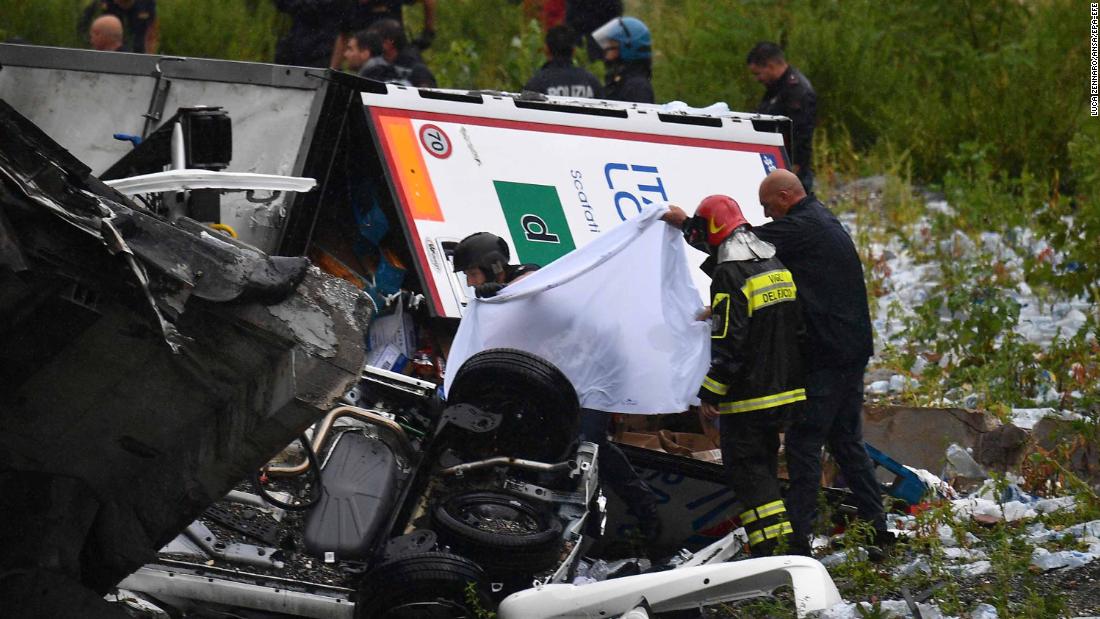 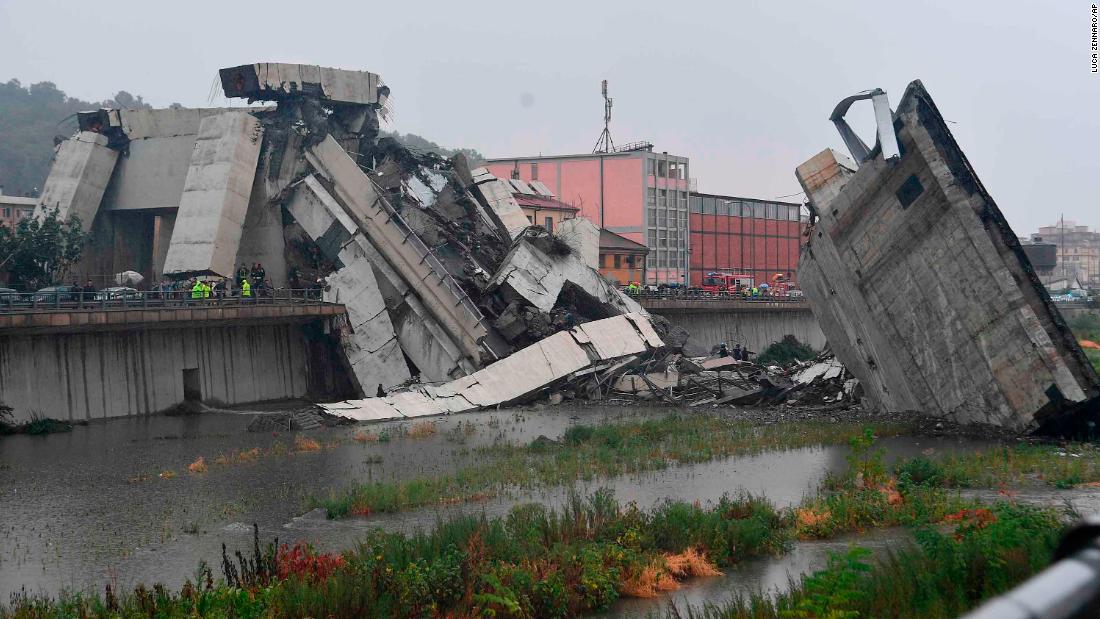 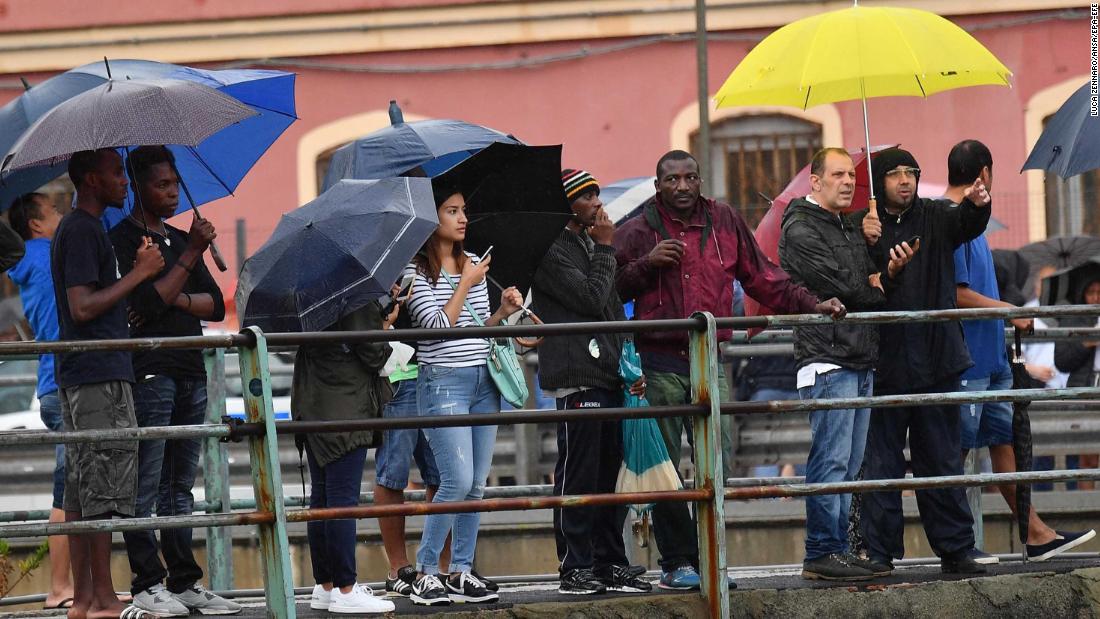 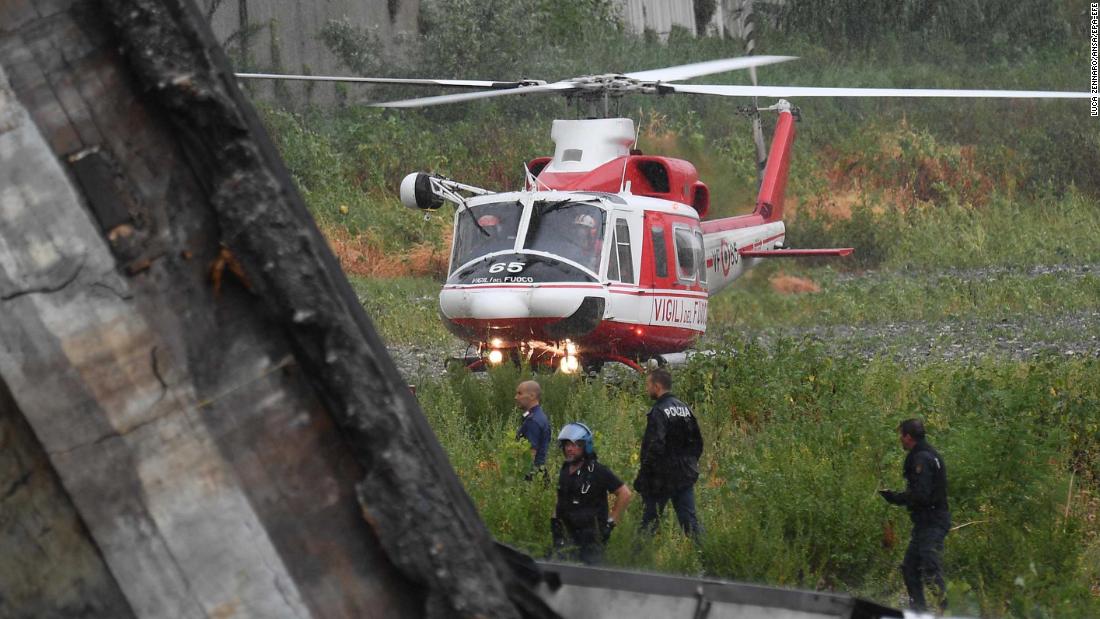 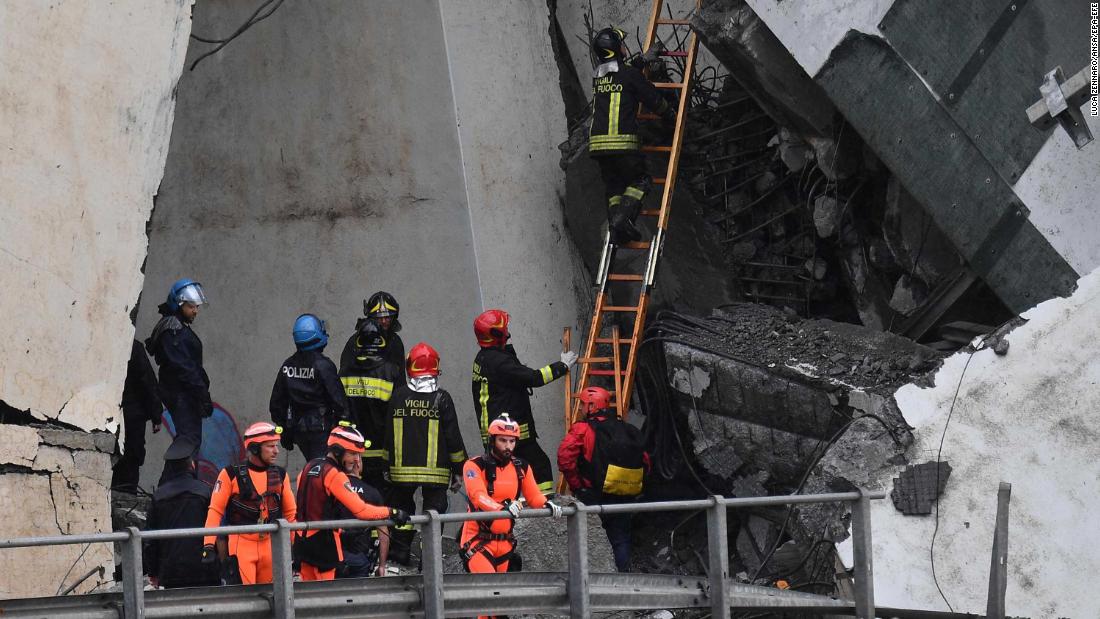 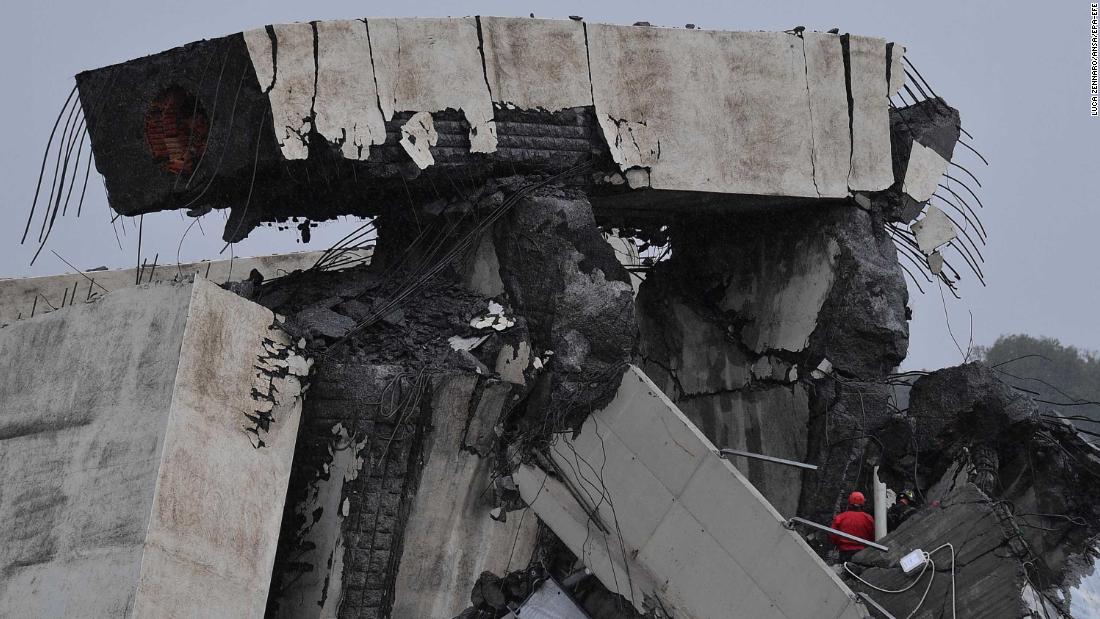 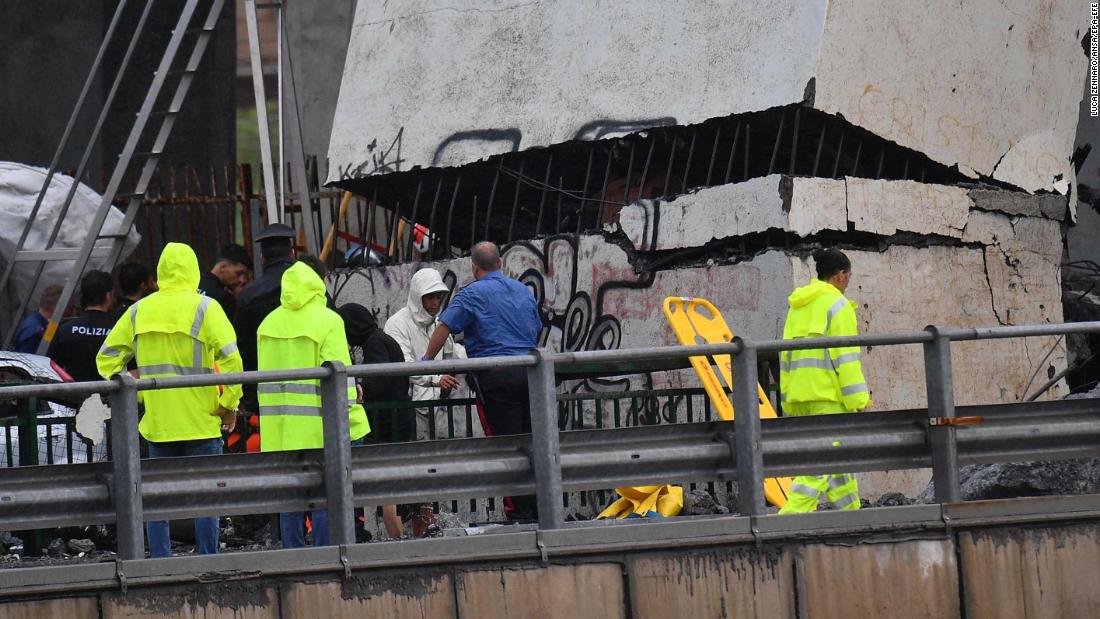 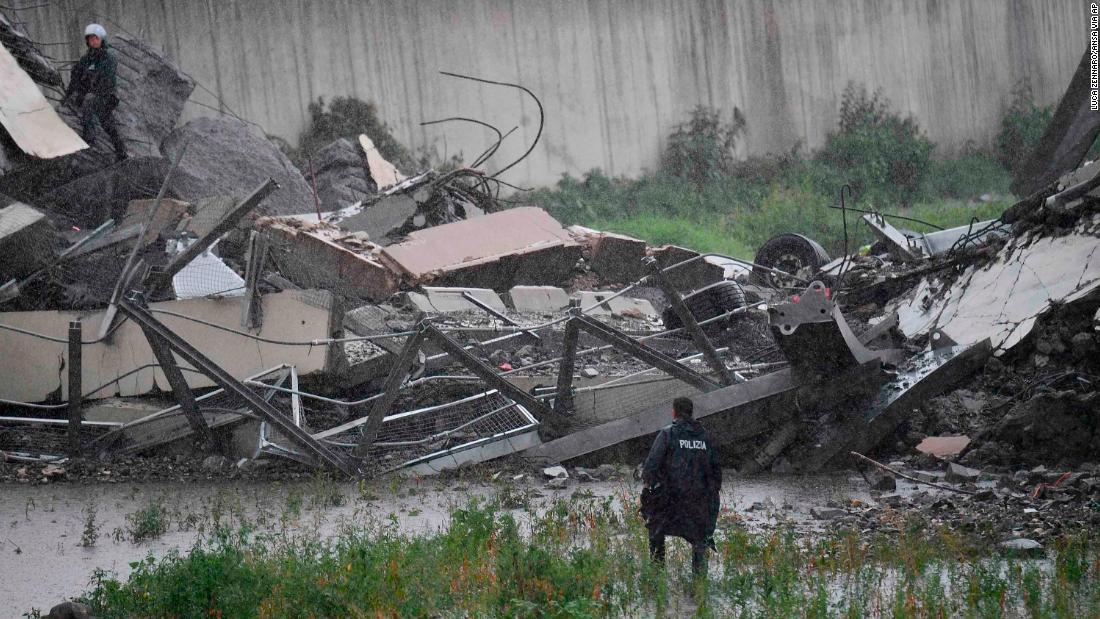 The incident at the bridge, a concrete structure opened in 1968, occurred about noon (6 a.m. ET) Tuesday, Italian state police said.
The A10, which runs across the bridge, is a major highway for residents and tourists in Genoa, connecting the city with the nearby airport, and a key route along the Mediterranean, linking the Italian coast with French coastal cities to the west.
The disaster occurred during peak tourist season — when many French tourists would have been using the highway — and one day before a national public holiday when many Italians travel to coastal areas.
Davide Di Giorgio was filming the heavy rain from the window of his office in Genoa when he saw part of the bridge crash to the ground.
“As soon as I turned the camera on to record the rain, we heard a loud noise and the bridge collapsed,” Di Giorgio said. “It took me three seconds to realize what happened.”
“My colleagues and I were shaking. It was frightening,” he added.
Eyewitness Davide Ricci told local newspaper Il Secolo XIX that he thought he saw lightning hit the bridge shortly before it crumbled. Flashes of lightning can also be seen in the footage shot by Di Giorgio.
“The debris from the collapsed (bridge) fell 20 meters from my car,” Ricci said, adding that he was driving south along the nearby river road at the time. “The central pylon crumbled, then the rest came down.”
Emergency services, including the fire department, police, ambulances and mountain rescue teams including sniffer dogs, soon arrived at the site. Several hours later, around 200 firefighters were still working at the scene, according to the Italian fire service.
Luca Cari, spokesman for the fire service, told Italian news agency Rai that rescuers were searching for people underneath the rubble as if it were an earthquake.
Canine search-and-rescue units were deployed by the Italian Red Cross to look for victims beneath the debris, while other Red Cross teams were sent out in police boats to search for people potentially stranded in the estuary of the Polcevera River.
Giorgio Larosa posted a video on Instagram showing rescuers working in heavy rain to free people from crushed vehicles in a grassy area below the viaduct.

Later in the day, Giorgio Mascione posted a video on Twitter showing the large gap between the two remaining sections of the viaduct, and the piles of rubble beneath.
READ MORE: Before and after Italy bridge collapse

It is unclear why a section of the bridge collapsed. Also known as the Polcevera Viaduct, the Morandi Bridge was designed by Italian civil engineer Riccardo Morandi and completed in 1968. The cable-stayed bridge had a total length of 1.1 kilometers and is 100 meters tall at its highest point.
The collapse came after 15 to 20 minutes of torrential rain, thunder and lightning. An automated report from the weather station at the nearby Genoa Cristoforo Colombo Airport around the time of the incident recorded thunderstorms with winds gusting to 57 kph (35 mph).
Some local residents are also questioning whether the bridge was adequately maintained.
“It is too early to say what caused the tragic collapse, but as this reinforced and prestressed concrete bridge has been there for 50 years it is possible that corrosion of tendons or reinforcement may be a contributory factor,” said Ian Firth, former president of the UK-based Institution of Structural Engineers, and a structural engineer specializing in bridges.
He added that there were “no obvious signs” as to what triggered the collapse at this time and that the storm and ongoing work on the bridge may or may not be relevant factors.
Genoa Mayor Marco Bucci said the bridge collapse was “not absolutely unexpected” but that he didn’t know the exact reason. When asked if he knew what had caused the bridge to collapse or if he knew if the bridge was undergoing repair work, Bucci said he wasn’t sure.
“It’s not my job to [know] that,” he said. “My job is to think about the future and work for the future of the city.”
“My role as the mayor is to make sure we have the correct infrastructure for the city and make sure that from the government we get the right amount of money in order to be able to set up the new infrastructure as soon as possible,” Bucci also said.
Demitrios Cotsovos, associate professor at the Institute of Infrastructure and Environment at Heriot-Watt University in Scotland, also urged caution before drawing any conclusions.
Engineers should be looking at the impacts of aging on the structural integrity of bridges such as this as well as “the potential impact of the environment and extreme weather conditions.”
“Potentially, there are lessons to be learned from such an event,” Cotsovos said.
This story has been corrected to reflect that the city of Genoa is located in northern Italy.

Something Feels Off… They Say The Typeface You..