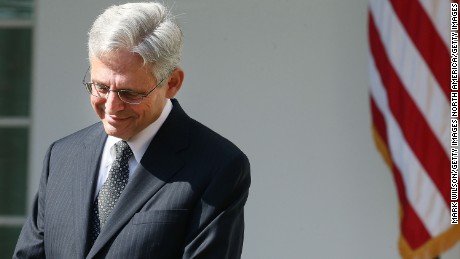 Garland spoke to the graduates about their futures and potential life changes ahead. When times get tough, Garland said, it’s helpful to focus on the lives of others.
“Get outside yourself, to focus on someone else,” said Garland, the chief judge of the United States Court of Appeals for the District of Columbia Circuit. “So instead of taking a selfie, turn the camera around — you know the way we used to take pictures. You’ll have a much more fulfilling life by turning your focus outwards, to helping others.”
The high school graduation speech — touted by the White House in its ongoing bid to get Garland confirmed, was strikingly different in tone than his address 46 years earlier. Garland, then headed off to Harvard, expressed support for a fellow commencement speaker’s right to voice opinions about the war in Vietnam and other political topics.
President Obama referred to that speech when he nominated Garland in mid-March, saying that although “Merrick didn’t necessarily agree with the tone of his classmate’s remarks, nor his choice of topic for that day” it led the now-judge to toss “aside his prepared remarks and delivered instead, on the spot, a passionate, impromptu defense of our First Amendment rights.”
Public statements by Supreme Court nominees are rare. But Garland’s situation is unusual. President Obama nominated him to replace the late conservative Justice Antonin Scalia. Senate Republicans contend the next president should fill the opening, leaving Garland in a state of limbo for months.