The former England captain has been honoured for his time in LA. But players like Robbie Keane and Landon Donovan were far more crucial to the team 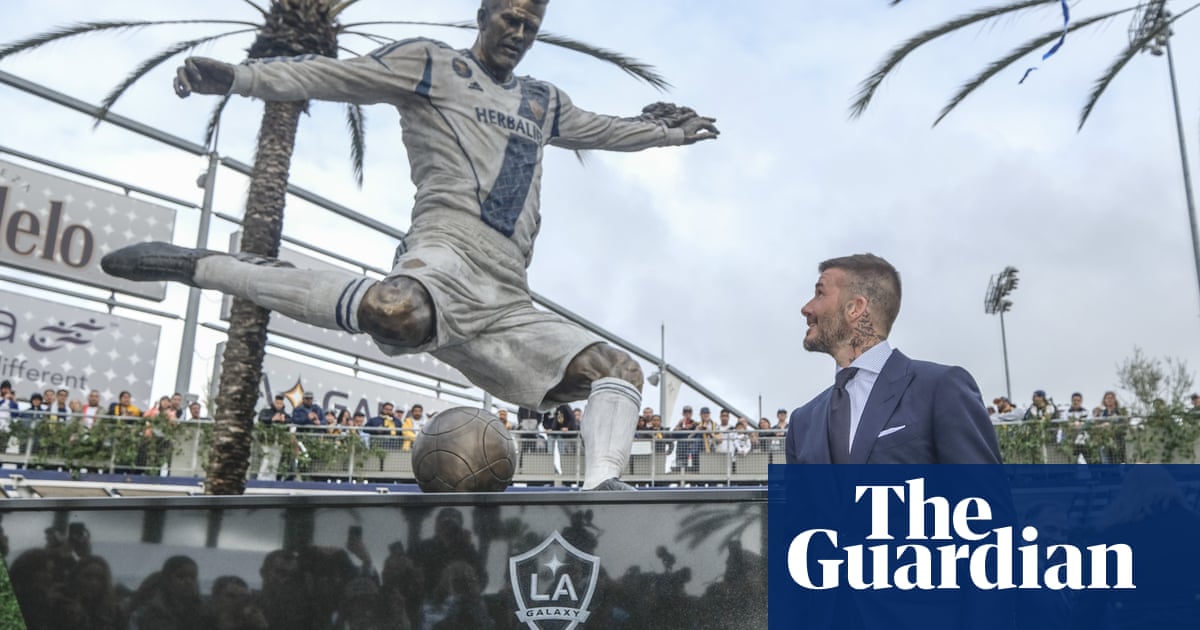 Deciding on a statue is never easy. There is the archetypal celebration statue, as demonstrated by the Thierry Henry knee-slide statue that stands in front of the Emirates Stadium. Then theres the arms folded, stare into the middle distance look usually reserved for managers see Sir Alex Fergusons statue outside Old Trafford. The bust is often seen as a safer option, although Cristiano Ronaldo may have something to say about that.

The LA Galaxy have gone for a cast-in-action statue of David Beckham, unveiled ahead of the clubs 2019 season opener against the Chicago Fire on Saturday. To outsiders, the sight of a Beckham statue outside a Major League Soccer stadium is fitting. He is, after all, one of the most significant figures in North American soccer history. His arrival in California back in 2007 is, with strong justification, hailed as a watershed moment in MLSs development. It was the start of an upward trajectory which has carried the sport in Canada and USA all the way to its current heights.

But if Beckham is to have a statue in the US, surely it should be outside MLSs headquarters or inside Don Garbers office, not outside Galaxys home. In fact, if the club were intent on choosing a statue of Beckham they perhaps should have gone for the midfielder confronting angry fans holding signs reading Go home fraud and Part time player. That is how many, still to this day, remember Beckhams time in Los Angeles.

Of course, that doesnt wholly reflect Beckhams stint as an LA Galaxy player. He did finish as a champion at the club, winning back-to-back MLS Cups before leaving for a swan song with Paris Saint-Germain at the end of 2012. After so many questions over his commitment, or lack of, early in his Galaxy career, Beckham eventually came good.

Is that enough for a statue, though? Immortalising Beckham raises a debate over his true legacy at the LA Galaxy and whether other club legends should have been recognised before the Englishman.

Take Cobi Jones, for instance. He made over 300 appearances for the Galaxy, finishing his career with 70 goals for the club a remarkable tally for a midfielder. Jones also led the team to their first ever MLS Cup in 2002 and even won a Concacaf Champions Cup (now Champions League) title in 2000, something no North American team has done since.

Theres also Landon Donovan, arguably the best player in American soccer history who spent his peak years at the LA Galaxy, winning four MLS Cups, two Supporters Shields and a US Open Cup, scoring well over 100 times in the process. His relationship with the California soccer community (if were excluding Jrgen Klinsmann) was much closer than Beckhams ever was.

Even if the LA Galaxy were set on erecting a statue of a foreign star they could have opted for Robbie Keane over Beckham. The Irishman scored 104 goals in just 165 appearances for the club, winning three MLS Cups in five years and winning fans through an unquestionable desire and commitment to the cause. He, more than Beckham, embodied a golden age for the LA Galaxy.

Why honour a player who, while obviously valuable to us, wanted to leave at every opportunity he had? says Jared DuBois, an LA Galaxy fan and podcaster. Personally, I dont see the point of making a statue of anyone 23 years into a franchises history. To be honest, Bruce Arena should get one before Beckham, because the case can be made that Beckham couldnt win in LA until Bruce arrived.

Its entirely possible that, as part of a new stadium naming deal, Dignity Health had a say in nominating Beckham for a statue. Even in retirement, the 43-year-old is a household name, making headlines even when he is going for a spin class with his son or sitting court-side at a Lakers game. There is, naturally, significant PR value to casting Beckham in bronze. My feeling is that the Galaxy is now in a battle for attention with LAFC, adds DuBois. The one thing LAFC cannot compete with the Galaxy on, currently, is history. So the Galaxy has decided to stress history as a marketing strategy. Its smart.

The LA Galaxy have also confirmed that Beckhams statue is just the first feature of a new complex called Legends Plaza, with plans to add further statues already in hand. Think a soccer equivalent of the Stars Plaza outside Staples Center, where status of Shaquille ONeal, Kareem Abdul-Jabbar and Magic Johnson, among others, stand. Donovan, Jones and Keane might still get their day in bronze.

Even still, recognising Beckham before all others makes a statement about his status at the LA Galaxy that sits uncomfortably with many. Beckham was undoubtedly a great figure in MLS, but was he really a great player? There are opposing views on that, but most are in agreement that there has been greater.

Man could get death in teen’s rape, murder, dismemberment