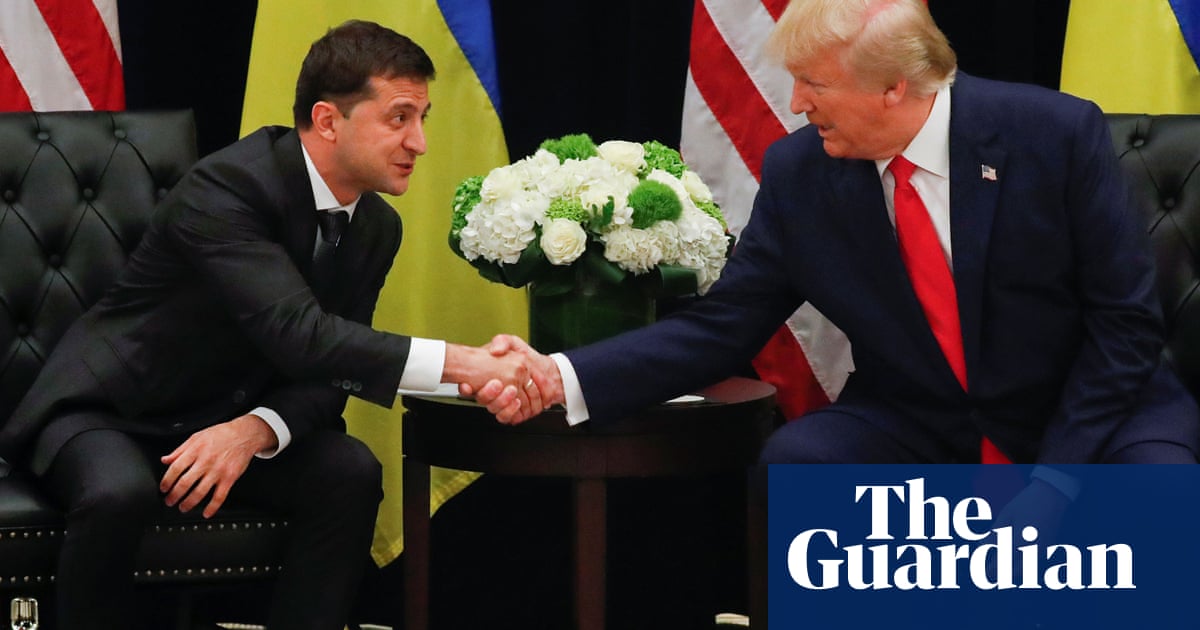 US diplomats told Ukraines president, Volodymyr Zelenskiy, that a prestigious White House visit to meet Donald Trump was dependent on him making a public statement vowing to investigate Hunter Bidens company, and a Ukrainian role in the 2016 elections, according to texts released on Thursday night.

The texts, released by three congressional committees holding impeachment hearings into Trumps conduct, show that the diplomats made clear that any improvement in Kyivs relations with Washington would be dependent on Zelenskiys cooperation in Trumps quest to find damaging material about the son of his leading political opponent, and on the Democrats in general.

In August, Zelenskiys government became aware, through a US press report, that military aid for its struggle with Russia, had been withheld by Trump, in an apparent effort to increase the pressure on the Ukrainian government.

The texts are exchanges from July to early September between three US diplomats – Gordon Sondland, the ambassador to the European Union, Kurt Volker, the then special envoy on Ukraine, and Bill Taylor, the acting ambassador to Kyiv. Trumps personal lawyer, Rudy Giuliani and a Zelenskiy aide, Andrey Yermak, also make brief appearances in the correspondence.

The conversations leave no doubt that the state department was deeply involved in the effort to use the office of the presidency to pressure a foreign government to investigate Trumps political enemies. At one point the diplomats even draft a statement for Zelenskiy to read out.

The early conversations come before a 25 July phone call between Trump and Zelenskiy that was the trigger for the impeachment proceedings now consuming Congress. They show that Sondland coached Zelenskiy on the call, making clear what would be required from him.

I [spoke] to Zelensky and gave him a full briefing. Hes got it, Sondland, a major donor to Trump and the Republican party, texted Volker.

Volker replied: Most [important] is for Zelensky to say that he will help investigation and address any specific personnel issues if there are any.

For their part, the Ukrainians were quite aware about what was happening and were deeply uneasy about what they were being asked to do. They made their concerns clear to Bill Taylor, who had taken on the acting ambassadors job in May.

Gordon, one thing Kurt and I talked about yesterday was [Ukranian finance minister] Sasha Danyliuks point that President Zelensky is sensitive about Ukraine being taken seriously, not merely as an instrument in Washington domestic , reelection politics, Taylor wrote to Sondland on 21 July.

Sondland, the Trump donor and ambassador to the EU, brushes aside the concerns, arguing they had to move forward irrespective of the pretext.

I am worried about the alternative, he added, in a likely reference to a dramatic worsening in relations.

On 25 July, just before the Trump-Zelenskiy call, Volker texted Yermak, the Zelenskiy aide: Heard from White House assuming President Z convinces trump he will investigate/ get to the bottom of what happened in 2016, we will nail down date for visit to Washington.

Trump and his supporters have sought to create a counter-narrative to the US intelligence community finding that Russia intervened in the 2016 US election in Trumps favour. According to the counter-narrative, the real interference came from Ukrainian oligarchs and was in Hillary Clintons favour. There is no evidence for the theory, but the launch of an investigation by Kyiv would have given it credence.

After the 25 July presidential call, Yermak confirmed it went well and Trump told Zelenskiy to pick a date for his White House visit. However, a final agreement was clearly delayed. By 9 August Sondland told Volker the White House was ready to confirm the visit as soon as Yermak confirms. He added: I think potus [Trump] really wants the deliverable.

Sondland suggests asking Yermak to forward a draft of what Zelenskiy is going to say. On the same day, Volker checked in with Giuliani and told him about the statement the Ukrainian president is going to make.

Can we all get on the phone to make sure I advise Z correctly as to what he should be saying? Want to make sure we get this done right, Volker said. Giuliani agreed.

The next day, it was clear the Ukrainians were nervous about trusting Trump and ask for the date of the White House visit to be announced before Zelenskiy made his statement.

Once we have a date, will call for a press briefing announcing upcoming visit and outlining vision for the reboot of US-Ukraine relationship, including among other things Burisma [the energy corporation on which Hunter Biden was a board member] and election meddling in investigations [a likely garble for investigation into election meddling], Yermak suggests.

On the same day, Volker presented a US draft of what Zelenskiy should say to Sondland.

Special attention should be paid to the problem of interference in the political processes of the United States, especially with the alleged involvement of some Ukrainian politicians. I want to declare that this is unacceptable, the draft statement said. We intend to initiate and complete a transparent and unbiased investigation of all available facts and episodes, including those involving Burisma and the 2016 US elections, which in turn will prevent the recurrence of this problem in the future.

Perfect. Lets send to Andrey after our call, Sondland replied.

However, the plan to exchange Zelenskiys statement for a White House visit was torpedoed when the Ukrainians read a report on the Politico news site, that Trump had blocked $250 million in military aid to Ukraine, as well as state department funding.

The news made the Ukrainians even more skittish. Taylor, increasingly uneasy himself, asked Sondland directly: Are we now saying that security assistance and WH meeting are conditioned on investigations.

In reply, Sondland told him to call to get a reply, instead of texting.

Taylor wrote to both Sondland and Volker to express his shared misgivings with the Kyiv government, that Zelenskiy would make his statement this time in the form of an interview, but that Ukraine would still not receive the military aid.

The nightmare is they give the interview and dont get the security assistance. The Russians love it. (and I quit.) Taylor warned.

The last published text is dated 9 September and is between a distressed Taylor and Sondland.

The message to the Ukrainians (and Russians) we send with the decision on security assistance is key. With the hold, we have already shaken their faith in us. Thus my nightmare scenario, Taylor said, adding: As I said on the phone, I think its crazy to withhold security assistance for help with a political campaign.

Sondlands reply was startling. Throughout the text dialogue he had taken the lead in arranging the original quid pro quo, Ukrainian help in investigating Bidens company and the 2016 election, in return for a White House visit.

But on 9 September , as if he had become newly aware of the high stakes of leaving a digital trail of the conversation, Sondland adopted a suddenly formal tone and reverted to the official line. By that time, the White House had become aware that a complaint about the 25 July presidential phone call was in the pipeline, and that it was likely to cause a scandal.

Bill, I believe you are incorrect about President Trumps intentions. The President has been crystal clear no quid pro quos of any kind, he told Taylor.

Kamalas Fake Lover: Jacob Wohl Told Me It Was for a Spike TV Show

Jeff Bezos tells Jamal Khashoggi’s fiance one year after his killing, ‘You are not alone’