Diplomats plan for the fall of Isis, as Kurdish and Arab fighters continue to push forward into the terror groups Syrian stronghold 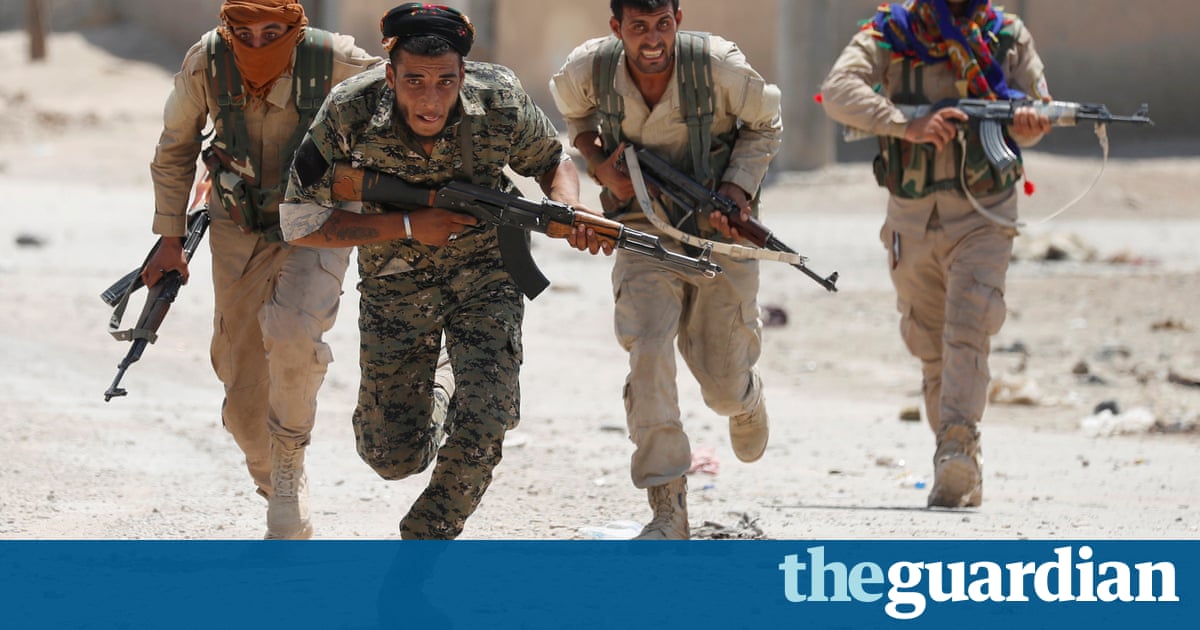 US-backed forces encircling Raqqa expect the fight to oust the remnants of Islamic State from its most symbolic Syrian stronghold to take at least three months, despite rapid advances towards the city centre this week.

The advance met with fierce resistance on Wednesday, as Isis fighters used an eighth-century fortified wall as a buffer against Kurdish and Arab fighters known as the Syrian Democratic Forces (SDF), who had been claiming neighbourhoods of the city, while steadily closing in from its surrounds.

With the wall now breached, and Raqqa all but encircled, the fate of at least 60,000 residents trapped inside is growing increasingly desperate. A volunteer fighter with Kurdish troops said as many as 50 airstrikes were hitting Raqqa each day, and observers suggested that as many as half of the reported 740 civilian deaths in Syria last month may have been caused by bombs dropped on the city by aircraft of the US-led coalition.

We also see a lot of drone bombs, said Paul Hatfield, an American volunteer with Kurdish forces. We had hundreds of them since we started in Raqqa.

Hatfield said his unit was in a dense neighbourhood about five miles from the city centre, and had been holding the SDFs western line of attack for the past two weeks. Its very dangerous, with a lot of [Isis] snipers, he said.

The looming fall of the Syrian capital of its so-called caliphate has squeezed Isis east from Raqqa towards Deir ez-Zor and a 200-mile stretch of the Euphrates river valley heading towards Iraq, where senior leaders have sought refuge in the town of Mayadin.

The Euphrates river region is fast emerging as one of the most crucial parts of a country devastated by a multi-faceted war, which international players are increasingly seeking to calm by carving out zones of influence across Syria.

Regional diplomats have earmarked at least five areas in Syria where neighbouring states could potentially help broker localised truces. But the complexity of the conflict and competing agendas has meant binding solutions remain elusive.

Talks in Istanbul, Amman, London and Washington in recent weeks have attempted to game ways that the ultimate fall of Isis will not lead to a further conflagration, which would turn what remains of Syria into an ungovernable rump.

Particular attention has been paid to southern Syria, where Russia has proposed to establish one of four de-escalation zones, which would cover the border town of Quneitra and the Golan Heights, where Israel believes Iran is attempting to consolidate a strategic hub.

One proposal put to Moscow is to allow Syrian troops to return to the Jordanian border in return for Iran pulling its forces and proxies from the area. Its a long shot, said an official in Istanbul. But the Russians are keen to broker a deal. The peace process they started in Astana isnt working.

Moscow said it plans to send forces, most likely military police, to Syria within two or three weeks, after concluding a deal with Turkey and Iran. Rex Tillerson, the US secretary of state, told his Russian counterpart, Sergey Lavrov, earlier this week that a solution for Syria was now in Russias hands.

Tillerson has since told senior European diplomats that his remarks were an attempt to call Russias bluff. However, US allies in the region say the fast declining interest of Washington in crafting any deal suggests further US disengagement.

Eastern Syria, where Isis is preparing a last stand, is one of two areas of the country where the Trump administration retains an interest in the conflict the other being the north-east, where 6,000 US-backed Kurdish and Arab troops are attacking Isis, diplomats said.

It is becoming about Iran for them out there, said one official. It was about Isis and only Isis. But things are turning. How that works out is anyones guess. Though Iran are doing very well. They are patient, intelligent and cautious actors. The Americans have got nothing to counter them. One school of thought is just to leave it to them. But then, what will the Israelis do?

Israeli military and intelligence officers have been regularly involved in meetings held in Jordan about developments in southern and eastern Syria, and have regularly expressed fears of Iran consolidating a presence in both areas as the war with Isis subsides.

In the heart of Raqqa though, there is little sign of that happening soon. At the moment in Raqqa we have four fronts, said Hatfield. A few days ago we had an offensive where we tried to push as close to the city centre as possible and we are still holding the western line which hasnt moved in the last 13 days.

At the moment my unit is in a dense neighbourhood about five [miles] from the city centre, with four to six storey high-rise apartment complexes. The snipers are horrible. They have a major advantage there. They have tunnels connecting every building of the neighbourhood. We blow them up once we move into a new area but they still have more and they manage to move around.

They are really dug in, they are professional, a lot of them foreigners. Very experienced fighters, they have been fighting for a long time. They try to outflank us with every opportunity.

I estimate the operation to last three months. The air support has been amazing. We are seeing probably 50 airstrikes per day … If that keeps up we will continue advancing.

UN war crimes investigators have denounced a staggering loss of civilian life caused by the US-backed campaign to reclaim the city.

Chilcot: Tony Blair was not ‘straight with the nation’ over Iraq war