The best way to counter the far right? Know the enemy | Hari Kunzru

Since Trumps election win, his online footsoldiers are ever more emboldened. Heres how to fight back 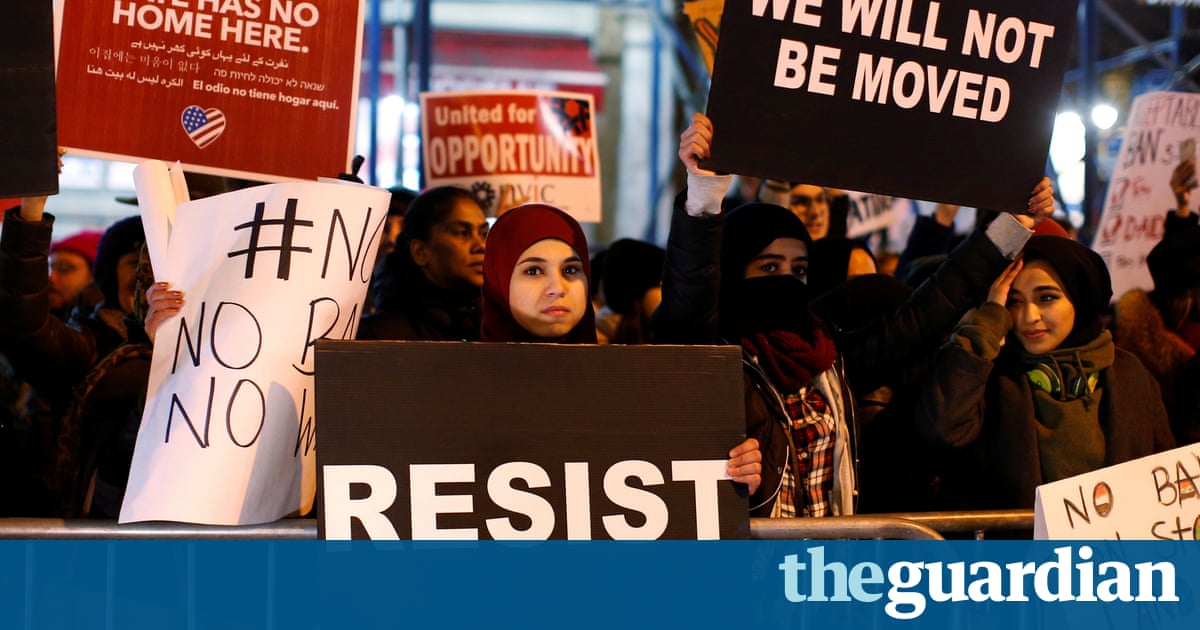 Last weekend, I flew to Berlin to speak at a seminar. I found myself relieved to be off American soil but worried about leaving my family behind. I wasnt concerned about their safety, at least not as things stand. My wife and children are citizens and my immigration status is solid, though its significant that these are times when I have to think about my wifes citizenship and my solid immigration status.

Since the inauguration, which feels like a long time ago, the pace of change has been rapid and the need to be close to my loved ones is strong. Like many of my friends, my social media use has become compulsive and unhealthy. You could think of it as informational hyper-vigilance, a draining state in which your need to keep yourself informed wakes you up in the middle of the night to check if something has happened, something that requires an immediate response or decision. You need to know how everyone else is reading each new development. Who is being melodramatic? Who is complacent? Who is reading the roiling political currents in a helpful way?

Ha ha ha, says the voice in my head. Look at the anxious snowflake who cant get past muh feelz. One of my symptoms is a compulsion to spend too much time on the far-right internet. While itself driven by extreme emotionalism, the toxic right tends to adopt a tone of lofty rationality towards its antagonists. The pain of leftists is not only intellectually contemptible but actively enjoyable. Indeed, theres an argument that it may even be a policy driver for the Bannon-Miller faction of the new Trump administration, the part that has migrated from the internet to the Oval Office and which understands the appetite of its base for bloody revenge.

The coastal liberal, that great straw man, is considered to be smug and insulated from the consequences of the politically correct positions he or she holds, particularly on immigration. The measure of Trumps various Bannon-authored policy announcements may not be their substance, their wisdom or their basis in any kind of broadly shared reality but their capacity to wound and unsettle ideological enemies.

On accounts with profile pictures of crusader knights, Roman philosophers or anime characters in states of ecstatic euphoria, one reads a lot about the Enlightenment and about the self-indulgence and corruption of a mythical hegemonic left. The great vice is empathy, the decadent prioritising of sentiment over reason and of racial or cultural outsiders over insiders, a trait of a self-indulgent class that has been infected by a sort of viral guilt by Frankfurt School Marxism. Rationality is a cipher for whiteness in this conversation and often cloaks itself in the language of sociobiology. Liberal expressions of empathy, particularly towards minorities or out-groups, are not only maladaptive in evolutionary terms, theyre not even sincere, merely so-called virtue signalling, part of a coercive shame game the rightists are refusing to play. This appeal to rationality comes with a supplement of irrational violence.

In the days after the election, as the message boards exulted in the power of their meme magic to alter the course of history, the hashtag #rwds did the rounds, standing for right-wing death squads. A quick and queasy perusal showed a lot of frothing millennials gleefully imagining the cartoonish torture of Jews, intellectuals, all the usual suspects, with an aesthetic derived from the cold war in Latin America. After the inauguration day incident in which Richard Spencer was punched while giving a TV interview, these same people presented themselves as victims of an intolerable breakdown of civility and the rule of law and threatened to take matters into their own hands if they werent protected by the authorities.

Ive never had much time for the strand of armchair American liberalism that believes in the essential goodness of America, the sort of people who quote Dr Martin Luther Kings famous phrase about the arc of the moral universe bending towards justice, not in order to urge fellow citizens towards struggle but to suggest that some cosmic process will make everything turn out all right. Theyre usually people who would never dream of espousing the embarrassingly retrograde theology of Manifest Destiny but cling on to a sort of fuzzy exceptionalism, in which they are absolved by their Americanness of responsibility to make the future.

While I was in Berlin, the executive order on immigration was announced and all hell broke out at the airports. Customs and Border Protection started detaining travellers whose status had changed while they were in the air. At Washington Dulles airport, a five-year-old Iranian boy was handcuffed. The Customs and Border Protection patrol defied court orders to give access to detainees, court orders that wouldnt have even been sought had a large cohort of lawyers not been part of massive protests that made it impossible for the authorities to ignore the situation.

This kind of practical grassroots action is in sharp contrast to the supine posture of congressional Democrats, who are lagging far behind the people they purport to lead.

Though the right berates the left for a politics based on empathy, their own strategy (or tendency, if you prefer not to tell conspiracy stories) is towards the colonisation of the public sphere by the presentation of feeling, instead of more traditional republican (and Republican) virtues such as moral rectitude, sincerity or adherence to truth. The presidents background in reality television gives him an intuitive sense that the veracity of a thing has no necessary relation to its feeling of truth and in that lies its political force. If he says his inauguration was the biggest ever, or that some nameless expert told him that torture works, no amount of fact checking will, in itself, counter that.

For those of us who believe that we need to preserve a functioning public sphere based on some shared standard of truth, it remains important to combat the alternative facts of the new administration, but the most successful actions of the last two weeks, such as the Womens March and the occupation of the airports, have shown that the facts on the ground matter just as much.

Comments will be opened later

Super Bowl guacamole could get pricier