Stephen Colbert on Trump: ‘Its even worse when he tells the truth’ 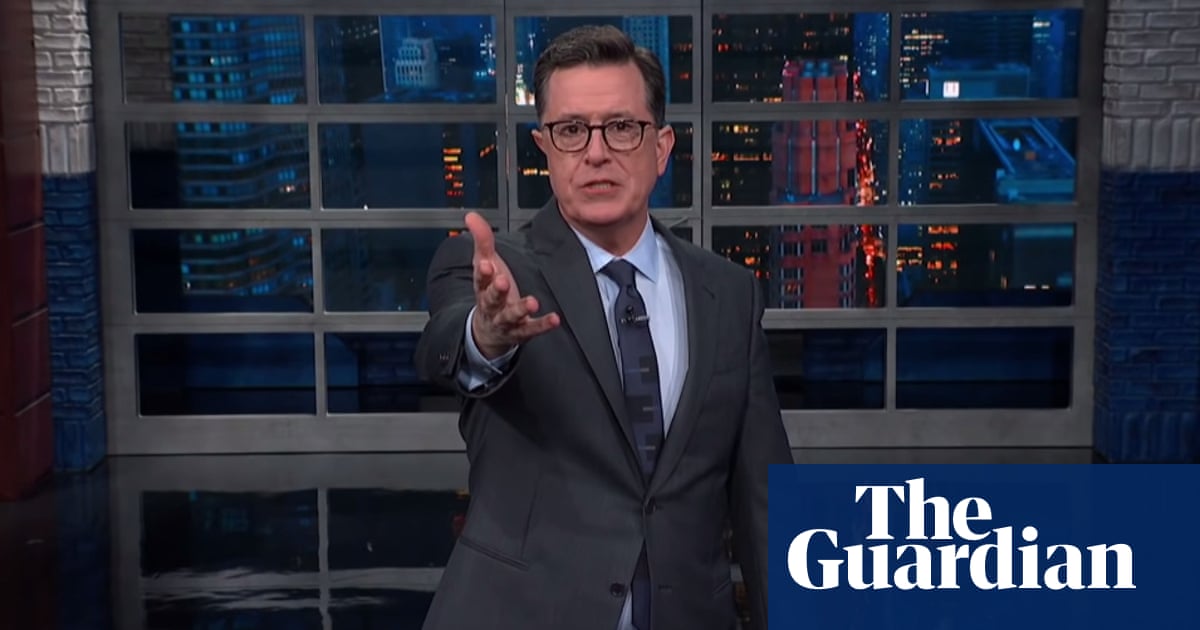 With Donald Trump admitting he would accept foreign intelligence on his political opponents, late-night hosts had a fresh crop of material.

Stephen Colbert: Muellers like, damn it, honey, Im going back to work!

On The Late Show, Colbert began: Every night, I stand up here and make jokes about all of Donald Trumps lies. But today, I think I might owe him an apology. Because it turns out, its even worse when he tells the truth.

In an interview with ABCs George Stephanopoulos, Trump admitted he would freely take information from a foreign power on his opposition. Colbert suggested this just might renew the Mueller investigation: Right now, you gotta imagine Robert Mueller is just getting home with all of his boxes after clearing out his office, turns on the TV, and hes like Damn it, honey, Im going back to work. Ill see you in another two years.

But Colbert laid bare the severity of what Trumps remarks: We laugh because its evil, and its evil and its stupid. For the last two years, every other word out of this guys mouth was no collusion. He personally dictated the statement about Don Jrs Trump Tower meeting, saying it was about adoption, so we wouldnt know about the collusion. He spent two years, according to Robert Mueller, obstructing justice so we wouldnt know the truth on his level of collusion. Then, George Stephanopoulos says, Hey, if a foreign government wants to collude, would you do it? Colbert then responded as Trump, Sure, who wouldnt collude?

Seth Meyers: Trumps Law and Order episode would have been six minutes long

Meyers started out with the less-important part of the ABC interview. Youd be forgiven for thinking Donald Trump actually doesnt do that much as president, but youd be wrong. Hes actually got a very important job, as we learned today from an interview on ABC. Trump is in charge of picking new paint colors for Air Force One.

In the interview, Trump showed Stephanopoulos several designs for the presidential aircraft. Meyers said: All right, I think I know what happened here. Trumps staff just gave him a menu with a bunch of airplanes on it to keep him busy while they run the government.

But he quickly turned to the more headline-worthy news in the interview. There it is, he just said it. The guy who has spent two years scream-tweeting No collusion! is now saying, If anyones down to collude, Im your guy. He even expressed surprise at Trumps brazenness: If Trump would have been president during Watergate, he would have left a business card at the break-in.

While Trump dealt in hypotheticals, Meyers felt this was an open confession to collusion, Trumps episode of Law & Order would have been about six minutes long.

Trevor Noah: Foreign dirt is the only import he wont put tariffs on

Trevor Noahs Daily Show monologue also revolved around the ABC interview. Russian meddling, two years of Mueller, and that shitty Game of Thrones ending after all of that, Trump has turned around and said that he would accept foreign help to win the 2020 election. Like apparently, foreign dirt is the only import he wont put tariffs on. Noah then posed the question: Why would Donald Trump do anything differently in 2020 if he never faced any real consequences for 2016?

The host then showed clips of Trump defending this action, even saying The FBI director is wrong, to which the audience expressed shock. Noah also tackled other parts of Trumps answer, including the part where he said he had never called the FBI, even after seeing a lot of things, with Noah inquiring: Now Im just wondering what other crimes Trump has witnessed that he didnt report.

He also called attention to the Prince of Whales typo in Trumps tweet. Unless Trump secretly met with Free Willy, thats not how you spell Prince of Wales!

UPDATED: This Influencer Is Getting Engaged On Instagram In Real Time Betches