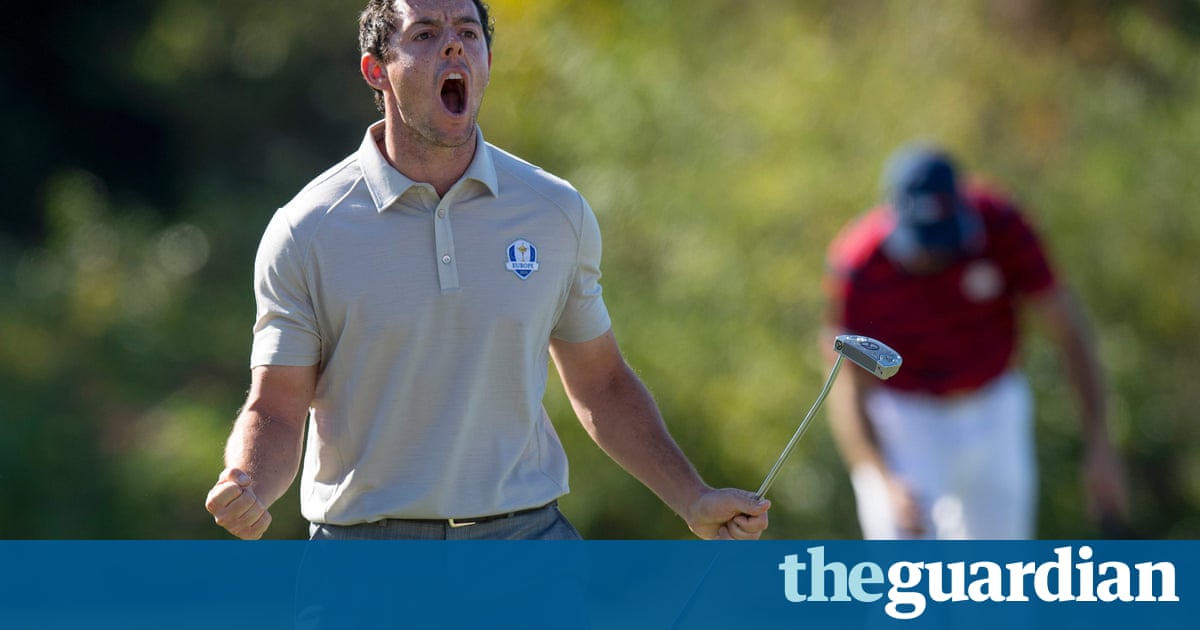 If Rory McIlroys significance to Europe was obvious in advance of this Ryder Cup, few could have envisaged his rising status as battle fever gripped Hazeltine. McIlroy might be the most unlikely of pantomime villains given his routine popularity both on and off the course but that is precisely his role as cast by the galleries here.

The key point that cannot be ignored is thus: Darren Clarke, Europes captain, desperately needs other players to summon both the spirit and style of McIlroy when taking to the course on Sunday. The USA hold a lead of 9 to 6 pre-singles which, while not insurmountable, looks strong enough to provide the platform from which to reclaim the Ryder Cup. It would prove one of the great, comedy American collapses should they toss this one away.

As the Northern Irishman battled desperately and brilliantly to keep Europe alive in this magnificent contest, the flow of abuse towards him grew. That crossed the line on occasion, to the point where McIlroy would logically have been involved in a psychological battle to retain composure. It only briefly wobbled during an afternoon period where adrenaline prevailed.

McIlroy should not be portrayed as a shrinking violet. He seemed to revel in elements of the attention bestowed upon him from a chunk of a lively, 50,000-strong Minnesota crowd. McIlroy looked close to self-combusting on occasion, his fist pumps and shouts of joy alone quite the force of energy. The man who once dubbed the Ryder Cup an exhibition was right at the centre of that very thing. Whatever ones view of the nature of that show, it was compelling viewing.

The 27-year-old was also a recurring bright spot for Europe on this second day, which closed with the USA holding a commanding advantage. In doing so, McIlroy conjured memories of Ian Poulter; so recently the man American golf fans loved to hate. With McIlroy, as was the case with Poulter, so much of this scenario resonated in brilliant on-course performance. It fuelled me a lot, said McIlroy. The more they shouted, the better we played. I hope they shout at us all day tomorrow.

McIlroy and Thomas Pieters, the rookie who excelled to the point where he was trusted for every session of this event, returned back-to-back Saturday wins. It was Pieters who holed out superbly on the 17th green, shortly after 5pm, for a 3&1 success over Brooks Koepka and Dustin Johnson. Earlier, McIlroy, in partnership with Pieters, had seen off Rickie Fowler and Phil Mickelson.

The trouble for Clarke, McIlroy et al is that the USA have a rocket-fuelled lead actor of their own. Patrick Reed was once derided for claims of upcoming greatness when the reality is he has the game to walk the walk. Reed has easily outplayed his only partner, Jordan Spieth, while absolutely revelling in the emotion of the occasion. Reed hooped, hollered, downed putts and landed iron shots like darts. How he has enjoyed the last laugh upon those who thought his insistence of being one of the worlds top five players was formed in cloud cuckoo land.

Reed provided Saturdays marquee moment when he holed out for an eagle from the 6th fairway in an afternoon clash with Justin Rose and Henrik Stenson. The Americans later won that match by 2&1, Reeds birdie putt at the 14th another key point just as Europe harboured hopes of a comeback.

An American repeat of the 4-0 foursomes whitewash of Friday was always unlikely and did not transpire. This time Europe prevailed in the format they have relished down the years, the late half won by Sergio Garca and Rafa Cabrera Bello against Reed and Spieth capping off the best match of this competition so far. The Spanish duo had been three down with four to play. Rose and Chris Wood defeated Zach Johnson and Jimmy Walker, with the sole American foursome success being delivered by Koepka and Brandt Snedeker.

At this lunchtime juncture, Clarkes men had clawed their way back to the position of just one point behind. Following the debacle of Friday morning and scar tissue naturally prevalent in USA minds, this was a strong European position.

By close of play, the hosts had regained all momentum. McIlroy and Pieters were to prove the only winning European fourball pair. Given their foursome efforts, it seemed logical for Clarke to retain Garca and Cabrera Bello as a partnership. Instead, Martin Kaymer stepped in to pair with Garcia; Mickelson and Matt Kuchar swatted them aside, 2&1. Europe did not lead at any point in that game.

Danny Willett, once the recipient of the kind of treatment subsequently claimed by McIlroy, returned to the fray to play alongside Lee Westwood. Whereas Clarkes selection of Pieters as a wildcard has been fully backed up by the Belgians nerveless displays, Westwoods involvement has not yet paid off.

Westwood had missed three putts from kick-in range, the most costly of which arrived when the match was all square at the 17th. He took to the last green having played a sublime approach to 3ft, needing to covert for a half against JB Holmes and Ryan Moore. What happened next was as painful to watch as it was inevitable. As Westwood suffered, a penny for the thoughts of Russell Knox, overlooked by Clarke when the captains picks were announced. Westwood was taunted as he headed for the relative solace of the locker room, this surely one of his most wounding professional experiences.

When assessing this aggregate position, Clarke can, of course, draw upon Medinah. Four years ago, Europe proved their ability to laugh in the face of a supposed American procession. The vibe this time somehow feels different, as if Europe have been clinging on while searching desperately for the direction of travel as started in the late throes of Saturday, four years ago. McIlroy was pivotal to that; he is the name on everyones lips once more, even if his approach may be in vain.