After losing the morning foursomes 4-0 on the opening day of the Ryder Cup, Europe rallied in the afternoon fourballs to close at 5-3 down thanks to Rory McIlroys magnificent eagle 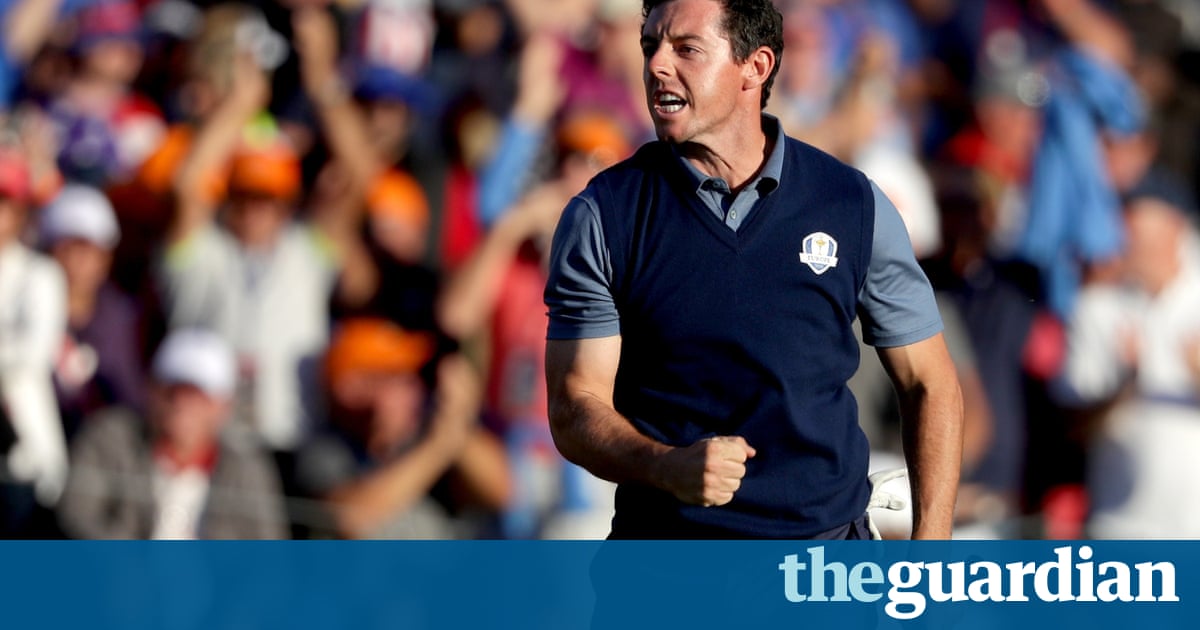 With four matches of this Ryder Cup complete Europes obituary was half-written. The USA, inspired by the legend of Arnold Palmer, claimed the first session of the event with a whitewash not seen since The King was captain in 1975.

The outcome seemed written in the stars, amid a sense there was barely any merit in playing for the remaining 24 points. Further bad news for the holders, as if it was necessary, derived from the format of that morning spell: foursomes are historically an American weakness. In 2014 the USA lost the two foursomes segments 7-1. The point arrived from two halved matches. A European recovery from this position seemed as likely as PJ Willett being afforded a VIP ticket to Sundays closing ceremony. More of his unfortunate and recurring influence later.

It transpires, wonderfully so for the dynamic of the 41st joust for the Ryder Cup, that tales of Europes demise were grossly exaggerated. The Mauling of Minnesota was no more; as illustrated by the removal of roars which had reverberated around Hazeltine National for four hours.

In an afternoon session of fourballs Darren Clarkes men staged a stirring comeback to leave the aggregate score at 5-3. Europe may be behind but they have unquestionably been afforded fresh hope just when, even so formatively, all seemed lost. Europe trail but have the momentum so absent during a wounding first few hours. In another pertinent nod to history, which Clarke would be foolish not to draw upon, the overnight scoreline is precisely the same as from Friday into Saturday at Medinah in 2012. No one will need reminding as to what happened next.

In the foursomes wave mist gave way to blue skies and a red scoreboard. Henrik Stenson and Justin Rose, such a formidable combination at Gleneagles two years ago, were toppled 3&2 by Patrick Reed and Jordan Spieth. Rory McIlroy and Andy Sullivan had been two up on Phil Mickelson and Rickie Fowler after six holes but succumbed to defeat by a hole. As the atmosphere intensified, so too did USA belief.

Sergio Garca and Martin Kaymer, which always looked the most questionable of Clarkes pairings, lost out 4&2 to Jimmy Walker and Zach Johnson. Europe had been one up in that match when taking to the 12th tee before capitulation ensued.

Clarke will never admit that Thomas Pieters was named as a foursomes partner to Lee Westwood because of the furore surrounding Danny Willett. One should not expect him to. And yet it is difficult not to infer precisely that that is what occurred. Pieters was pretty much blameless in the 5&4 victory of Dustin Johnson and Matt Kuchar, such was the remarkably inadequate level of Westwoods play. Perhaps the 43-year-old felt intense pressure, amid the sceptical notion that his closeness to Clarke was the only reason for a wildcard pick.

Ill take responsibility for that, said Westwood, to his credit. I played poorly today and Thomas played well. Hes got into the Ryder Cup really well. He showed some balls out there and made some putts when we needed to.

Westwood spent the afternoon on the practice range. That was after issuing a warning: This is only the first morning. Anything can happen in The Ryder Cup. Its freaky like that. In context of what had transpired, Westwood may as well have delivered the comment while wearing nothing but a water-shooting bow tie and a pair of clowns shoes. He might just have the last laugh.

After a brief lunch break Europe were transformed. Rose and Stenson, facing the same opposition in game one, had a better-ball score of nine under par through 14 holes in recording a 5&4 win. Stenson came within a whisker of a sensational hole in one at the 8th, which even the wildly partisan to the point of unsportsmanlike home crowd had to acknowledge. Spieth and Reed thereby sampled defeat for the first time in four Ryder Cup matches together.

Its one thing if youre losing and youre playing badly but we were both pretty happy with our performance in the morning, said Stenson. We missed a couple of putts and thats why we lost. We tried to get even better, we did that and made a few putts and got the point back. It makes it sweeter when you beat the guys you lost to in the morning, thats for sure.

Garca, now in alliance with his compatriot and the debutant Rafa Cabrera Bello, saw off JB Holmes and Ryan Moore by 3&2, though not without a late scare.

McIlroy, who seemed routinely irritated by gallery shouts, but to the point where inspiration rather than distraction was forthcoming, teamed up brilliantly with Pieters in thereby justifying Clarkes decision to leave the young Belgian on the course for consecutive rounds. Europe hauled down Dustin Johnson and Kuchar, 3&2, in that final fourball match. McIlroys demonstrative passion this week has been quite a sight, almost as if he has been freed from the shackles of standard tournament play. He sealed the match with a magnificent eagle at the 16th.

The afternoon negative for Clarke resonated in heavy defeat for Willett and Kaymer. Brandt Snedeker and Brooks Koepka were a seven-under better ball for the 14 holes of their 5&4 success but the week is not getting any easier for Willett after his brothers needless and earlier interventions. The Masters champion appeared in relaxed enough touch despite regular cat-calling from outside the ropes but the situation could not have been particularly easy for other members of the Willett family, who had come here to celebrate a special career moment. Neither they, nor the player himself, have actually done anything wrong.

Late intrigue surrounded whether or not Garca and Cabrera Bello could cling on after the USA won holes 14 and 15 from a position of four down. They duly did, in what may prove a key reference point for this clash.

As shadows lengthened, so did Clarkes stride. There is a contest still that looked implausible for a spell on Friday.