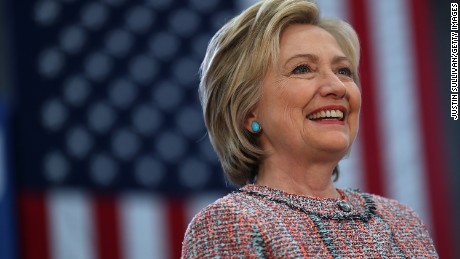 (CNN)Doug Elmets’ home sits as a proud time capsule to his Reagan-era roots: Framed pictures adorn the walls of a 21-year-old Elmets gripping the hand of his political hero, President Ronald Reagan; a two-foot tall bronze statue of the 40th President sits on an end table; his signed letter of congratulations to Elmets and his wife, both former White House staffers, hangs in the bookshelf surrounded by nonfiction books written by Republicans.

The Elmets of the Reagan era would never have predicted what he’s now saying about the 2016 presidential race.
“I’ve never voted for a Democrat in my entire life. And I’ll vote for my first Democrat when the ballots come out in November,” said Elmets, who remains a registered Republican. “I could live with four years of Hillary Clinton before I could ever live with one day of Donald Trump as president.”
It’s an astonishing statement for the Republican consultant and former operative who began his career as a White House staff assistant to conservative powerhouses Ed Rollins and Lee Atwater in 1981 at the dawn of the Reagan administration.
Elmets became a White House spokesman under long-time presidential adviser David Gergen and then moved onto the campaign trail for Reagan’s 1984 re-election campaign. He later served as press secretary for the Department of Energy until he moved to California to work in public relations, policy and political consulting.
He’s now using his decades of political capital to promote the once unthinkable: Hillary Clinton for president. Elmets said she’s more qualified than the “xenophobic and scary” Trump.
“I don’t believe Donald Trump is a Republican. I think Donald Trump is a brand. And he’s managed to hoodwink America into believing he will lead this country through the fire. I think he will thrust us into the fire,” he said.
The Trump campaign did not immediately respond to a request for comment.
Elmets joins what’s being called on Twitter, #RepublicansforHillary. At times mocked on social media or a hashtag invoked by both sides to insult the other, the moniker borrows from the notion of the “Reagan Democrats,” who crossed party lines to vote Republican, drawn to the charismatic Ronald Reagan in 1980.
Elmets and others like him bet Donald Trump will have the opposite effect — propelling Republicans to the Democrats’ candidate.
The sentiment is expanding beyond social media to active support by known Republicans for Clinton. Elmets is not the only known Republican to do so. Hedge fund manager William Oberndorf, who has contributed approximately $1.5 million in the last year to Republican candidates and causes, told CNN in a statement: “If it is Trump vs. Clinton, and there is no viable third party candidate, I will be voting for Hillary Clinton.”
Oberndorf stressed he will not financially support Clinton or any Democratic PACs, but his denial of funding or support for the presumptive Republican nominee is clear.
Recent polls show the numbers of Republicans breaking toward Clinton does remain under 10% among self-identified Republicans. An ABC News/Washington Post poll found 8% of self-identified Republicans support Clinton, 7% in a Fox News poll, and 6% in both a CBS News/New York Times and NBC News/Wall Street Journal poll.
Those single-digit figures are nearly on par with what Democratic candidates snagged from Republicans in exit polls in recent presidential election years. President Barack Obama and Democratic candidates John Kerry (2004) and Al Gore (2000) all won between 6%-8% support from Republicans, according to exit poll data.
But should the national race between Trump and Clinton run close, as recent polling suggests, the “Republicans for Hillary” supporters could be a voting bloc, not simply a snarky social media hashtag.
“I do think there are a lot of disenfranchised Republicans who can’t believe Donald Trump will be or should be the nominee,” said Elmets, adding Trump lacks a moral compass or the core values of the party. “I believe as the campaign evolves and Donald Trump continues down this path, Hillary Clinton is going to look like a much more sympathetic character than she might today. Republicans will come along eventually. I do think they will do it publicly at some point or they’ll privately do it in the polling booth in November.”
Publicly, national GOP leaders are warming to their presumptive nominee. House Speaker Paul Ryan and Sen. Lindsay Graham have moved away from more hardline positions on Trump to call for party unity. Former 2016 rival Marco Rubio, who famously sparred with Trump just a few months ago, said: “I want to be helpful, I don’t want to be harmful because I don’t want Hillary Clinton to be president.”
Elmets refuses to follow those prominent leaders in his party, saying the GOP must look inward and evolve away from Trump. He said watching the violence and anger at Trump events only proves to him why Reagan Republicans need to vote for Clinton.
“I, like so many people throughout the world, are horrified by what we see coming alive on our TVs as we see people fighting and disrupting. The rallies are an indication of where America is going if Donald Trump gets elected President. Is that what we want?”