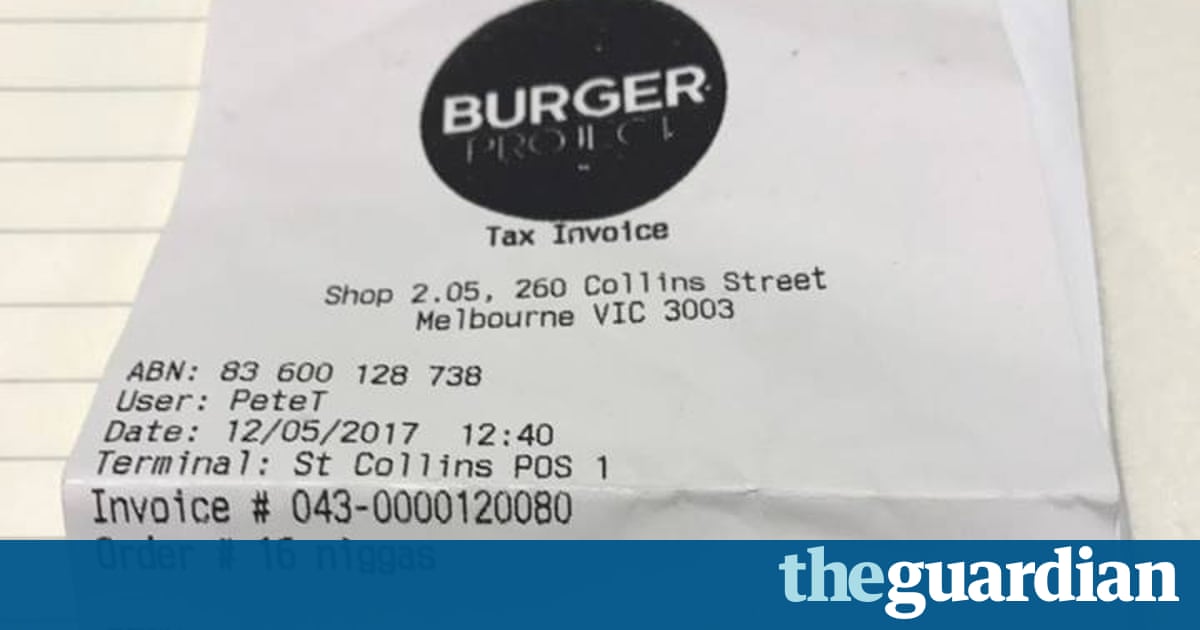 A staff member from a Burger Project restaurant in Melbourne has been fired after using the word niggas on a receipt given to a black man.

On Friday, Rutendo Ruth Muchinguri posted a photo on Facebook of the receipt her husband Nicholas received from the store, owned by celebrity chef Neil Perrys Rockpool Dining Group.

In her post, Muchinguri said: My hard working black husband went to your Collins St store to have lunch with his friends and this is a photo of his receipt for the order.

It is so disappointing that in a place where my husband spent his hard earned money, he received this sort of disgracefully discriminatory treatment. Its exhausting that in 2017, in a modern and multicultural society some of your staff remain insensitive to the impact that this insidiously nasty and vile word has.

Come on, you can do better. This is not OK. I guarantee you that we will not be spending our money at any Rockpool Group businesses. I want to know what you will do about this.

Contacted by Guardian Australia, a company spokesperson said they were disappointed and saddened that Nicholas Muchinguri was treated in this manner by one of our employees.

It is not behaviour or language that we support or condone in any way and does not reflect the values or culture of our business.

We have a clear policy of respect and care for our customers, staff and community, which is deeply engrained in our business. This is why the behaviour of one employee is so disappointing.

We became aware of the issue on Friday afternoon, when we were contacted on behalf of Nicholas, at which point we apologised about the incident and immediately looked into the matter. The employee was dismissed shortly afterwards.

Neil reached out to Nicholas directly this morning and apologised personally, conveying his deep disappointment that this occurred.

We continually talk to our staff about our philosophy of care, and will continue to do so, so they understand our companys core values, and respect for our customers and community, the spokesperson said.

On Saturday, Muchinguri posted on social media that the family was disappointed by the initial response from the restaurant group, which she said was more concerned about its public image than the hurt caused.

Nicholas and I would like to thank everyone for their support. Although we are happy to see that there was repercussions for the staff member, we dont wish him any ill will. Hopefully this will turn into a learning opportunity for him and the entire staff at the Burger Project.

We also want to thank Neil Perry for calling Nicholas first thing this morning to offer an apology on behalf of the company. We felt that the initial response of the the Burger Project was more concerned about its public image than the hurt caused. It was stated that they reached out to apologise as soon as they were aware of the incident and, as mentioned, Nicholas received an apology this morning, not last night.

As we read through the numerous comments that condemn what happened, we were encouraged that the majority of people see how wrong and hurtful this situation is. Its concerning to see that there are some comments that perpetuate this type of prejudice and racism. Weve come a long way but there is still more to do and more conversations to be had. It may be uncomfortable at times but its during the tension of these situations where we can see real growth and change.

Chelsea Manning prepares for freedom: ‘I want to breathe the warm spring air’

Just do it: the experience economy and how we turned our backs on stuff