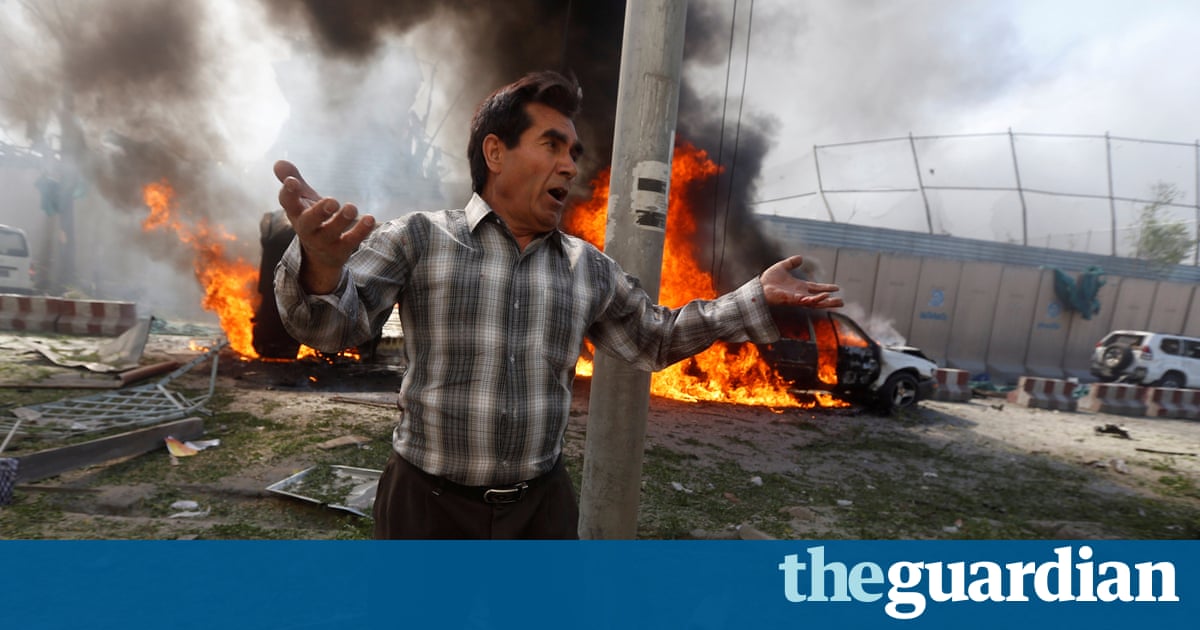 Scores of civilians have been killed after a massive explosion in a highly secure diplomatic area of Kabul left 64 people dead and wounded more than 300, the Afghan interior ministry said on Wednesday.

The huge explosion went off close to the German embassy in the Wazir Akbar Khan area of the capital on Wednesday morning, sending clouds of black smoke spiralling into the sky near the presidential palace and foreign embassies.

The explosion occurred at the peak of Kabuls rush hour when roads are packed with commuters.

Witnesses described dozens of cars choking the roads as wounded survivors and panicked schoolchildren sought safety, with men and woman struggling to get through security checkpoints to search for loved ones.

Basir Mujahid, a spokesman for Kabul police, said it had hit close to the fortified entrance to the German embassy.

It was a car bomb near the German embassy, but there are several other important compounds and offices near there too. It is hard to say what the exact target is, Mujahid said.

It is unclear whether German embassy staff in Kabul were injured or hurt when a huge car bomb exploded in its vicinity, a security source told Reuters.

A French minister, Marielle de Sarnez, said its embassy had been damaged but it was not known if there were any French victims. Indias foreign minister, Sushma Swaraj, tweeted that its staff were safe.

Najib Danish, deputy spokesman for the Afghan interior ministry, said the blast was so heavy more than 30 vehicles were either destroyed or damaged.

While embassies and government buildings in the area are located behind fortified security walls, the road where the car bomb detonated is open to the public. Connecting two main traffic circles, the strip is always busy with civilian pedestrians and drivers, particularly in he morning.

Elias Naser, a clerk at the nearby Azizi Bank, said it was the first time he had experienced an explosion up close.

First, it felt like an earthquake, then everything came down, windows, the ceiling, he said. The electricity cut out.

Houses hundreds of metres away from the explosion were damaged with windows and doors blown off their hinges. The blast was loud enough to wake some residents. Reports from journalists inside Kabul said the explosion shook their houses and shattered windows.

Images posted on social media showed a huge plume of smoke in the sky.

At the Amani school, close to the explosion site, groups of school children streamed through the police barricades two hours after the blast. Some of them looked visibly shaken after being holed up in the school for hours, others held on to worried looking parents who had come to fetch them.

Shortly after the explosion police had closed off the bomb site over a radius of a few hundred metres. Outside the police barrier, close to the Emergency Hospital, bystanders assessed the damage. Shopkeepers were sweeping broken glass off the pavement.

Entezar, a barber, said he was inside his shop when the explosion occurred. The whole window blew out, he said, pointing to his facade.

Outside the Emergency Hospital, guards were fending off people searching for injured relatives. Crying women banged on the gates to be let in.

My colleague is in there, said one woman, describing how her co-worker had been burned in the face.

There was no immediate claim of responsibility, but the attack came as the resurgent Taliban are stepping up their annual spring offensive.

The Islamic State group has also claimed responsibility for several recent bombings in the Afghan capital, including a powerful blast targeting an armoured Nato convoy that killed at least eight people and wounded 28 on 3 May.

Pentagon chief Jim Mattis has warned of another tough year for both foreign troops and local forces in Afghanistan, where more than one third of the country is outside of government control.

The blast was the latest in a long line of attacks in the Afghan capital. Kabul province had the highest number of casualties in the first three months of 2017 thanks to multiple attacks in the city, with civilians bearing the brunt of the violence.

Agence France-Presse, Associated Press and Reuters contributed to this report

House of Cards season five review so close to being treasonous