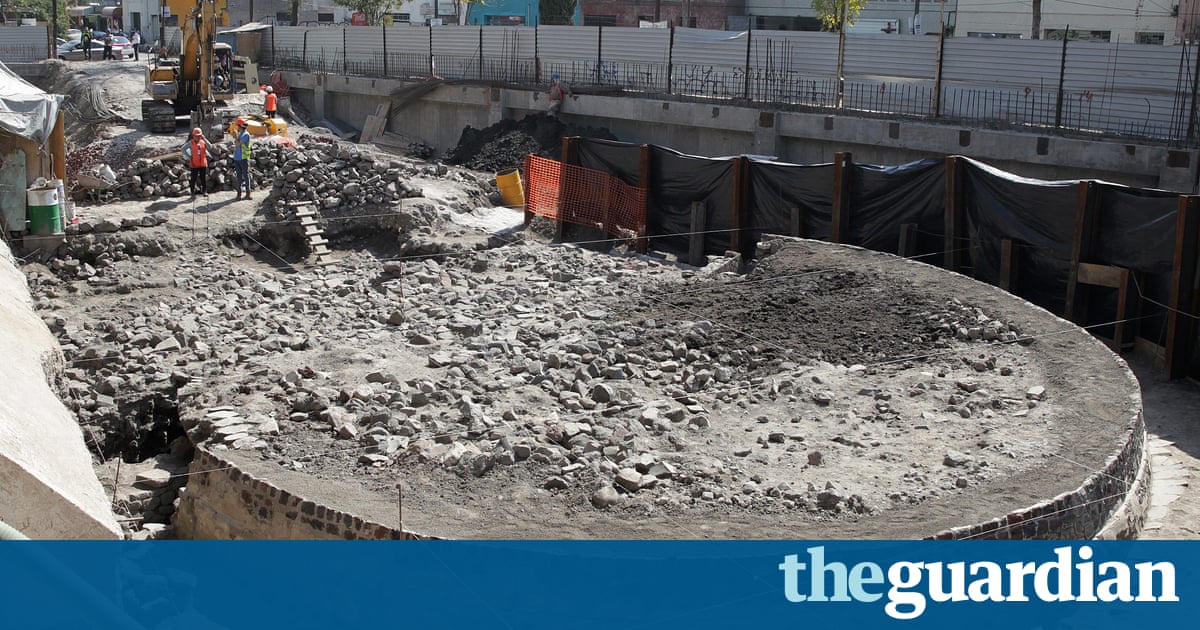 Archaeologists working in Mexico City have uncovered a circular temple built more than 650 years ago to worship a god of wind.

It was excavated at a site discovered two years ago when a mid-20th-century supermarket was demolished. The circular platform, about 36ft in diameter and 4ft tall, now sits in the shadow of a shopping mall under construction.

The site is believed to have been built to worship the god of wind, Ehecatl-Quetzalcoatl, and the plans are to preserve it and make it visible to the public with a large viewing window.

But deeper down they were surprised to find the temple, which offers another example of how the Mexica-Tlatelolca people worshipped one of their principal deities, Snchez said. Offerings found included an infant with no signs of trauma, bird bones, obsidian, maguey cactus spines and ceramic figurines of monkeys and duck bills.

The majority of the temples original white stucco remains intact. Archaeologist Salvador Guilliem said similar structures, round on three sides and with a rectangular platform on the fourth, have been found before, including in the same area.

The temple lies within the perimeter of a large ceremonial site in the capitals Tlatelolco neighborhood, though much of that perimeter is invisible, covered by an urban landscape.

Tenochtitlan was a centre of political power while Tlatelolco dedicated itself to commerce, with an important market that was noted even by the Spanish conquistador Hernn Cortes. Eventually Tenochtitlan took control of Tlatelolco.

When the Spanish and their indigenous allies began conquering Tenochtitlan, residents of that city withdrew to Tlatelolco to continue the fight and Tlatelolco became the last site of resistance against the Spanish in the area.

The site of the recently uncovered temple is just yards away from where Mexican soldiers massacred protesting students in 1968.

Brazil legislators vote against anti-corruption bill even as nation mourns