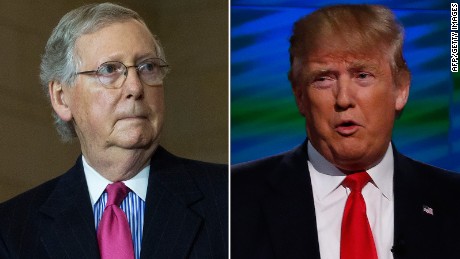 But, the Kentucky Republican wrote, he has expectations of Trump — who he said “now has the opportunity and the obligation to unite our party around our goals.”
McConnell said in a statement Wednesday night that he plans to support the real estate mogul, who became the GOP’s presumptive nominee once Texas Sen. Ted Cruz ended his campaign after losing Indiana’s primary on Tuesday night and Ohio Gov. John Kasich then dropped out of the race on Wednesday.
“I have committed to supporting the nominee chosen by Republican voters, and Donald Trump, the presumptive nominee, is now on the verge of clinching that nomination,” McConnell said.
“Republicans are committed to preventing what would be a third term of Barack Obama and restoring economic and national security after eight years of a Democrat in the White House,” he said. “As the presumptive nominee, he now has the opportunity and the obligation to unite our party around our goals.”
Trump’s clinching of the GOP’s nomination has put the endangered Senate Republicans who are up for re-election this year on the spot, too. McConnell’s stance is likely to send a signal to those Republicans. Already on Wednesday, Ohio’s Rob Portman, New Hampshire’s Kelly Ayotte and North Carolina’s Richard Burr said they’d support Trump.