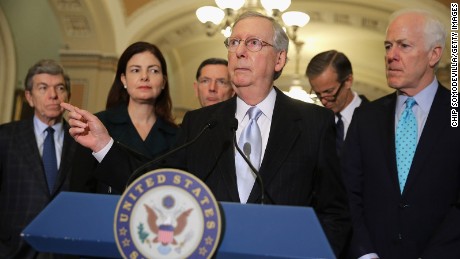 Through the airwaves, online and in the media, the GOP establishment helped prop up Rep. Todd Young over his fellow Republican congressman, Marlin Stutzman, a tea party favorite who was a thorn in the side of his House leadership team. Young will now face off against former Democratic Rep. Baron Hill in the race to succeed retiring Republican Sen. Dan Coats.
In addition to the $1.6 million the Young campaign spent on TV, a McConnell-aligned super PAC and affiliated non-profit spent $1.8 million — along with another $1.3 million from the U.S. Chamber of Commerce, a group with deep ties to Republican leaders. Stutzman, who spent a fraction of that amount, was painted on TV as an inauthentic conservative out to personally benefit himself and climb the political ladder.
The Indiana primary amounted to the most significant tea party vs. establishment fight of any Senate race this cycle. But after suffering embarrassing losses to tea party candidates in 2010 and 2012 Senate primaries, the party establishment has since learned how to eliminate their conservative foes in primary races — namely by defining them through a barrage of attacks early in the election cycle.
The party establishment has not lost a Senate GOP primary since 2012, even as presidential candidates aligned with Republican leaders failed to make headway against Donald Trump.
Stutzman, a member of the House Freedom Caucus who voted against former Rep. John Boehner as speaker last year, sought to use the attacks to portray himself as a man willing to do battle with the GOP leadership — much like Cruz.
In a message to his supporters Tuesday, Stutzman called on voters to defeat the “McConnell machine.”
“I have even taken stands against my own party leadership when I knew they were wrong,” Stutzman said.
McConnell allies took note.
“It seems like the best way to lose a Republican Senate primary these days is to attack Mitch McConnell,” said Josh Holmes, a former McConnell chief of staff, whose firm, Cavalry LLC, and co-founder John Ashbrook worked actively on Young’s behalf.