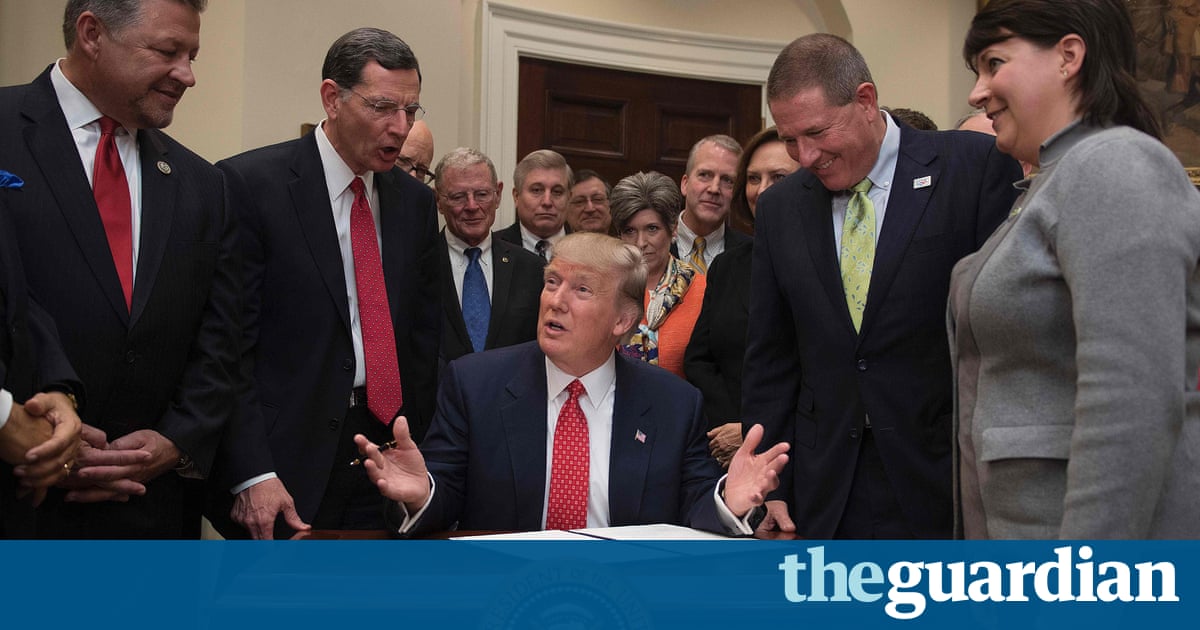 The presidents move marked the first step toward fulfilling his pledge on the campaign trail to roll back Obama-era regulations, which include a 2015 rule designed to curb the flow of pollution into major bodies of water, wetlands and ponds by expanding the requirement of permits to pursue any actions that might cause them harm.

Trump, who cannot simply repeal the entire rule with the stroke of a pen, declared Obamas policy a massive power grab and ordered the Environmental Protection Agency to formally review it. The action also bolstered the position of Trumps new EPA chief, Scott Pruitt, who wishes to dismantle the rule and sued the Obama administration over it in 2015 while serving as the attorney general of Oklahoma.

Republicans have long decried all environmental regulations enacted under Obama as overreach and vowed to overturn them. The clean water rule has been particularly controversial among farming and ranching groups, who lobbied against it, claiming it provided the federal government with too much control and potentially exposed them to litigation for taking actions affecting even the smallest bodies of water.

The Obama administration and environmental groups had championed the rule as a necessary step in securing streams and wetlands that are connected to sources that provide roughly one-third of Americans with drinking water.

Trump also signed several other actions Tuesday, including a bill to roll back Barack Obamas policy that barred certain mentally ill people from owning guns. The bill was criticized by many progressives, but mental health and violence experts told the Guardian members of Congress were right to roll back the rule.

Trump also signed an executive order billed by his administration as an effort to boost historically black colleges and universities, one day after the president gathered with representatives of 64 of the countrys 100 institutions known as HBCUs.

Under Trumps direction, a federal government program established to strengthen and promote HBCUs will move from the Department of Education to the White House.

With this executive order, we will make HBCUs a priority in the White House, an absolute priority, Trump said upon its signing. Historically black colleges and universities are incredibly important institutions, woven into the fabric of our history, just about like no other.

Dozens of HBCU presidents descended upon Washington this week as part of a push to secure as much as $25bn in funding from a forthcoming budget that will be debated by Congress. Leaders from HBCUs, who met with Trump at the White House on Monday, said they were seeking financial support to tackle issues ranging from infrastructure to student loans.

Trump was backed by just 8% of African Americans in Novembers election, and his administrations commitment to civil rights has been met with skepticism.

Betsy DeVos, the new education secretary, sparked controversy on Monday for issuing a statement that dubbed HBCUs as real pioneers when it comes to school choice her preferred direction for education policy in America. Her comments were swiftly criticized for glossing over the reality that HBCUs were founded during the era of racial segregation, when laws prohibiting African Americans from attending schools left them with no choice but to establish their own.

In the wake of the uproar, DeVos made a more concerted effort to acknowledge the barriers to education faced by African Americans while addressing a luncheon with HBCU leaders in Washington on Tuesday.

Bucking [the] status quo, and providing an alternative option to students denied the right to attend a quality school, is the legacy of HBCUs, DeVos said.

But your history was born not out of mere choice, but out of necessity, in the face of racism, and in the aftermath of the civil war.

Hidden figures no more: female Nasa staff to be immortalised in Lego