Kyle Lowry got his game back at the perfect time for the Toronto Raptors. And the Miami Heat are in all kinds of trouble 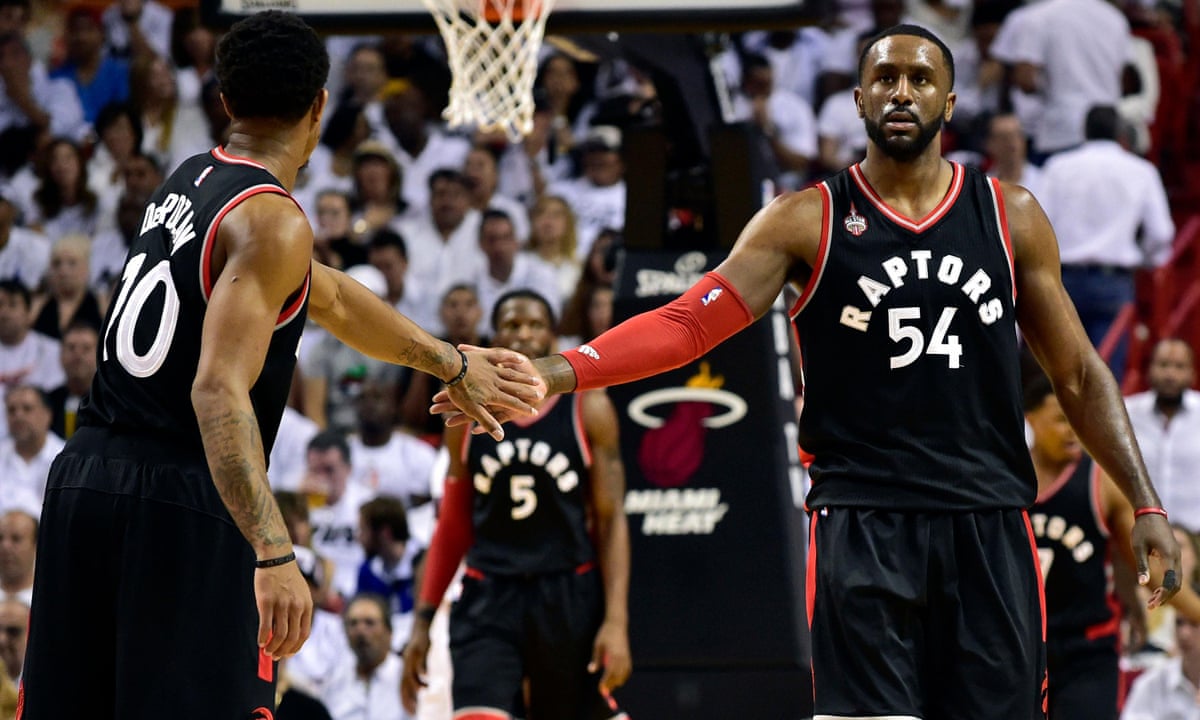 Kyle Lowry got his game back at the perfect time for the Toronto Raptors. And the Miami Heat are in all kinds of trouble.

Shaking off epic playoff struggles, Lowry scored 33 points including five straight to break a late tie in a duel with Dwyane Wade to lift the Raptors to a 95-91 victory over the Heat on Saturday night in Game 3 of the Eastern Conference semifinal series. The Raptors lead the series 2-1. Game 4 is in Miami on Monday night.

I felt like it was just a matter of time, Lowry said.

He was a career 34% playoff shooter coming into Saturday, and was shooting 31% in these playoffs. But he connected on 11 of 19 shots, 5 of 8 from three-point range.

Ive never lost faith in him, Toronto coach Dwane Casey said. Ive said this: Hes struggled, but you dont forget how to shoot. And we needed that. We needed him to be Kyle and he was Kyle tonight.

Lowry had 29 points after halftime. So did Wade, who led everybody with 38 points and sparked a Miami comeback from 13 down in the second half.

But the Heat lost a game, and maybe much more given that center Hassan Whiteside will have an MRI on Sunday to determine how much damage he did to his right knee in a second-quarter tumble. Well know more tomorrow, Heat coach Erik Spoelstra said.

Toronto center Jonas Valanciunas limped off with a sprained ankle in the third quarter, and hell be listed as day-to-day. But Whitesides injury seems far worse, with the free-agent-to-bes status for the rest of the series in major doubt.

Guys have to step up, Wade said. Nobody can be Hassan Whiteside. … We have to figure out a way.

DeMar DeRozan scored 19 points, and Valanciunas had 16 points and 12 rebounds in just 22 minutes for Toronto. Goran Dragic scored 12 points, and Joe Johnson had 10 for Miami.

It was tied at 82 when Lowry hit a three-pointer with 2:07 left, and he followed that with a pair of free throws on the next Toronto possession. Miami answered with four straight, a layup by center Udonis Haslem followed by a nifty Eurostep in the lane by Wade that led to another score.

The Raptors went back to Lowry, and his pullup from the right wing with 31.7 seconds left was pure giving Toronto an 89-86 lead. Wade got a layup to get Miami within one, but Toronto restored the three-point edge when DeRozan made two foul shots with 23.9 left.

Johnson missed an open three on the next Miami possession, the Raptors went back to the line and the Heat crowd started filing to the exits. Kyle hit some daggers, Wade said.

When Whiteside left, the Raptors attacked the basket at will and went up 49-40 at the half. Lowry made a pair of quick threes when play resumed, and the lead was quickly up to 13.

That was the margin when Valanciunas got hurt. When he left, Wade went on a spurt. He shot 5 for 9 in the third, slamming down one of his own misses, making a pair of three-pointers, freeing himself from defenders with behind-the-back dribbles and getting friendly bounces.

It was vintage Wade, and the tied-up series had a tied-up score of 68-all going into the fourth quarter. I took it upon myself to do a little bit more, Wade said.

But in the end, Lowry found a way to put the Raptors back in control of the series. We came here and got one, Lowry said. But we didnt come here just to get one.