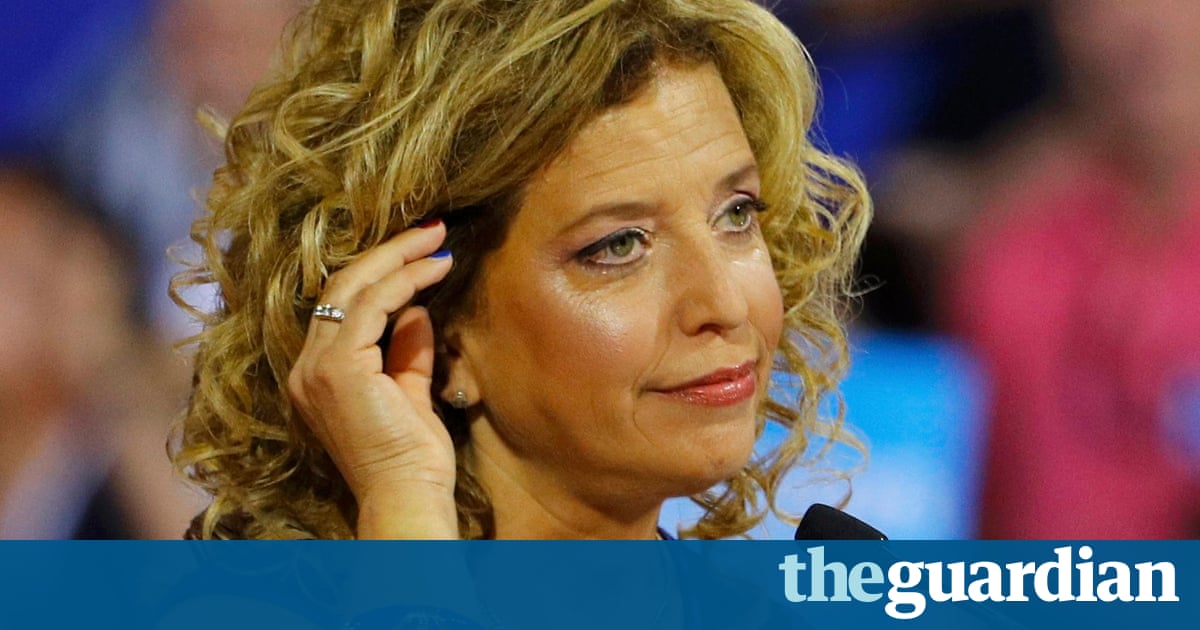 The chair of the Democratic National Committee, Debbie Wasserman Schultz, has announced her resignation on the eve of the partys convention, dealing a blow to hopes of demonstrating unity in the face of the threat from Donald Trump.

Schultz said she would step down after the convention. She has been forced to step aside after a leak of internal DNC emails showed officials actively favouring Hillary Clinton during the presidential primary and plotting against Clintons rival, Bernie Sanders.

Debbie Wasserman Schultz has made the right decision for the future of the Democratic Party, Sanders said in a statement, adding that the party leadership must always remain impartial in the presidential nominating process, something which did not occur in the 2016 race.

The Sanders campaign has long claimed that the party establishment had its finger on the scales during the bitter and surprisingly long primary, but the embarrassing new revelations proved to be the final straw for a figure who had been a lightning rod for tension within the party.

The DNC chair, whose named is emblazoned at the top of thousands of convention credentials, was originally expected to play a central role in the four-day meeting of delegates and party leaders. But as the convention prepared to get under way in Philadelphia on Sunday, there were already reports that Schultz had lost a prestigious speaking slot and would only gavel-in proceedings.

Internally, the resignation may reduce tensions, removing from the stage a figure who was almost certain to have been greeted with boos by sections of the large pro-Sanders delegation. Nevertheless, the turmoil risks undermining public attempts to show that Democrats have come together as a party and draw a contrast with chaotic scenes at on the floor at the Republican convention in Cleveland last week.

It will also raise new questions about the source of the leaked emails, which emerged on Friday and are the latest in a batch of documents believed to have been hacked from DNC computers earlier this year.

Wikileaks published the latest batch, but on Sunday, Clintons campaign manager, Robby Mook, said experts believed the Russian government may have played a role, even claiming their motive was to help elect Donald Trump.

Whats disturbing to us is that experts are telling us Russian state actors broke into the DNC, stole these emails, and other experts are now saying that the Russians are releasing these emails for the purpose of actually of helping Donald Trump, Mook told CNN.

In June, Wasserman Schultz called the breach a serious incident and said Crowdstrike, a cybersecurity firm brought in by the DNC, had moved as quickly as possible to kick out the intruders and secure our network.

The Trump campaign has angrily denied the suggestion that it is being promoted by the Russians, though it has taken a noticeably softer line toward Vladimir Putin than most other western parties and politicians. Crowdstrike experts who examined the first release of hacked emails several weeks ago suggested they bore the hallmarks of a government-sponsored hacking attempt.

More immediately, the Schultz resignation may inflame anger among Sanders supporters, many of whom had resisted the idea that the only way to stop Trump is by supporting Clinton.

The most explosive new revelation from the Wikileaks release was an officials suggestion that Sanders religious faith, or lack thereof, could be flagged as a way to dissuade voters from backing him in Bible belt states.

I think I read he is an atheist, the DNC chief financial officer, Brad Marshall, wrote in one email. This could make several points difference with my peeps. My Southern Baptist peeps would draw a big difference between a Jew and an atheist.

Sanders, who is Jewish, spoke little of religion during the primary, but the sight of a supposedly neutral body apparently seeking to weaken one of its own party candidates caused particular anger among progressives.

Schultz, a congresswoman from Florida who is herself Jewish, is not thought to have been directly involved in this email exchange, but she was seen in other messages writing dismissively of the Sanders campaign.

On Sunday, she said she had discussed her decision with Barack Obama, who appointed her in 2011, and with Clinton, in the interests of helping the party secure the election in November.

Going forward, the best way for me to accomplish those goals is to step down as party chair at the end of this convention, Wasserman Schultz said in a statement.

As party chair, this week I will open and close the convention and I will address our delegates about the stakes involved in this election not only for Democrats, but for all Americans, she said.

We have planned a great and unified convention this week and I hope and expect that the DNC team that has worked so hard to get us to this point will have the strong support of all Democrats in making sure this is the best convention we have ever had.

Earlier, Sanders told ABC: I think she should resign, period.

I dont think she is qualified to be the chair of the DNC, he added to CNN. Not just because of these emails, which revealed the prejudice of the DNC, but also because we need a party that reaches out to working people and young people. And I dont think her leadership style does that.

The senators campaign manager, Jeff Weaver, said the emails proved his suspicion that the party establishment was biased against the Vermont senator.

This spring, Sanders and Wasserman Schultz had clashed over alleged improper access to a DNC voter database, the scheduling of TV debates during the primary campaign and the angry reaction of Sanders supporters to a Nevada nominating convention.

In May, the feud reached such an acrimonious level that the senator promised to support her opponent in the Democratic primary race this fall.

But Democratic leaders praised and thanked Wasserman Schultz in emphatic statements. For the last eight years, Obama said in a statement, she has had my back. This afternoon, I called her to let her know that I am grateful.

Wasserman Schultz, the president said, brought Democrats together not just for my re-election campaign, but for accomplishing the shared goals we have had for our country. Obama also saluted her role in supporting our economic recovery, our fights for social and civil justice and providing health care for all Americans.

Clinton paid extensive tribute to a longtime friend, adding: theres simply no one better at taking the fight to the Republicans than Debbie.

I look forward to campaigning with Debbie in Florida and helping her in her re-election bid, the presumptive Democratic nominee added. Because as president, I will need fighters like Debbie in Congress who are ready on day one to get to work for the American people.

Staffers also had praise for the representative, despite the controversy around her. Regardless of the circumstances, you got to feel for someone who has logged the hours DWS has over the last five years, a former DNC official told the Guardian. Leaving under these circumstances is a shame.

However, the same official pointed out that no one is elected DNC chair for life. She overstayed her welcome and this result was a matter of time.