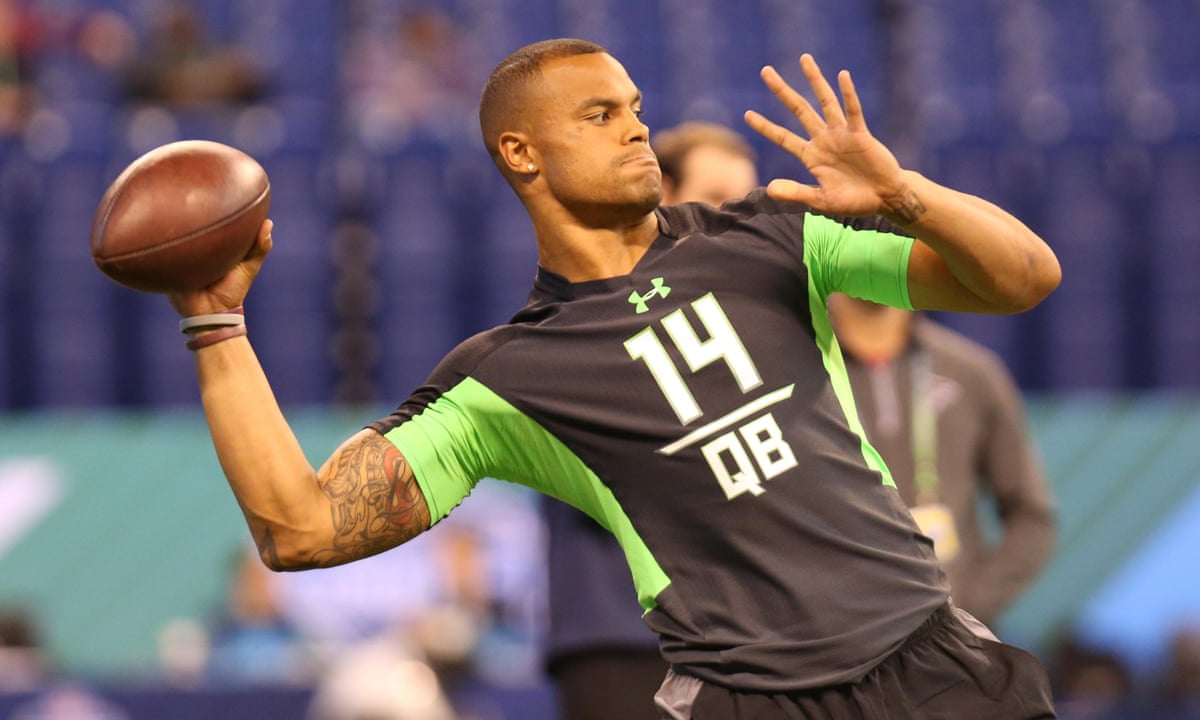 The Dallas Cowboys finally took a glimpse at a future without Tony Romo while taking a Baylor basketball star who hasnt played football since he was 13.

The final day of the NFL draft was something like the first two for owner and general manager Jerry Jones on Saturday. He was thinking less about filling holes on a 4-12 team and more about adding potential stars at positions where the present is in decent shape.

Put another way: Jones thinks a healthy Romo and receiver Dez Bryant are better than anything else at getting the Cowboys closer to 12-4, the record for his NFC East-winning team two years ago.

To the extent that we can interpret the picks that weve made as to how I felt when I said were closer to the year we had the year before than our year last year, then you can interpret it that way, Jones said. I certainly feel that way.

The Cowboys took Mississippi States Dak Prescott with the 135th overall pick in the fourth round, adding to the group competing to be Romos backup two days after a failed bid to move up for another first-round pick and get Memphis Paxton Lynch, who went to Denver instead.

Its the first time Dallas has drafted a quarterback since taking Stephen McGee, also in the fourth round, in 2009. And its just the third QB drafted by the Cowboys since 2001. Romo was undrafted in 2003.

With the last of four picks in the sixth round and their final pick of the draft the Cowboys took Baylors Rico Gathers at No217 overall. The 6ft 8in, 275lb Gathers projects as a tight end after deciding against pursuing a career in the NBA.

Dallas made a similar move in 2008, taking Texas A&Ms Martellus Bennett in the second round. The difference was that Bennett played football and basketball for the Aggies.

The Cowboys started Saturday by finally trying to address a shaky pass rush early in the fourth round, taking Oklahoma defensive end Charles Tapper with the 101st overall pick. Tapper started 38 of 39 games over his final three seasons with the Sooners, recording 15 1/2 sacks and 26 1/2 tackles for loss. He was a first-team All-Big 12 pick by the Associated Press in 2015.

The first Dallas pick in the sixth round was Purdue cornerback Anthony Brown at 189th overall, followed by Central Michigan safety Kavon Frazier at 212. A pick before Gathers, the Cowboys took Eastern Michigan running back Darius Jackson.

Romo missed 12 games with a twice-broke left collarbone last season, and the Cowboys went 1-11 without him. Kellen Moore, the current back, lost to the last two games, while Jameill Showers spent most of the season on the practice squad.

Im going to do the best I can and work as hard as I can and try to outwork everyone there, said Prescott, the only Southeastern Conference quarterback besides Tim Tebow with at least 70 touchdown passes and 40 touchdown runs. Pushing Tony Romo, pushing the other guys, Kellen Moore, and just knowing while doing that Im making myself better and making the whole team better.

Prescott said the Cowboys brought him in for a visit fairly late in the pre-draft process, and he had spent time with the coaching staff at the Senior Bowl. Dallas quarterbacks coach Wade Wilson went to Mississippi to see Prescott.

The 6ft 2in Prescott, who got a masters degree in December, was arrested on charges of speeding and driving under the influence in March. He said the Cowboys brought that up in their meeting.

It was the elephant in the room, Prescott said. Its something that I can guarantee everyone that it will not happen again. It was a mistake. But its going to make me a better person and it already has.

Dallas doesnt want Prescott to play right away because that would mean Romo got hurt again. And second-round pick Jaylon Smith probably wont after the Notre Dame linebacker tore two ligaments and sustained nerve damage in his left knee in his final college game at the Fiesta Bowl.

Running back wasnt a big need for the Cowboys going into the draft, but they still got Ohio States Ezekiel with the fourth overall pick.