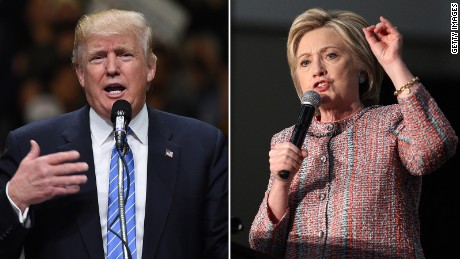 Washington (CNN)Hillary Clinton is mounting a more aggressive effort to confront Donald Trump head-on over topics her campaign sees as winners — and taking a page out of Trump’s playbook to do it.

The likely Democratic presidential nominee is attempting to take down Trump by zeroing in on individual issues, starting with housing and veterans’ care, and hitting their Republican foe with coordinated attacks.
Clinton’s campaign is making the candidate more readily available for interviews, with Clinton borrowing a Trump tactic and calling into television news programs — like CNN’s “The Lead” for an interview with Jake Tapper on Tuesday — this time, to attack her rival for a months-long delay in divvying up nearly $6 million in charitable contributions to veterans’ organizations.
“Look, I’m glad he finally did it, but I don’t know that he should get much credit,” Clinton told Tapper. “I think the problem here is the difference between what Donald Trump says and what Donald Trump does.”
RELATED: Clinton: Trump shamed into making donations to veterans groups
Her campaign is also dispatching an army of surrogates to hit Trump in battleground states and on conference calls with reporters. The goal: Chip into Trump’s dominance of the day’s news cycle and deepen concerns about his temperament.
Those concerns could be a key advantage for Clinton over Trump: An ABC/Washington Post poll in May found that 61% of voters say Clinton has a better personality and temperament to serve effectively as president, compared to 31% for Trump.
Tuesday’s effort focused on Trump and veterans. The Clinton campaign hammered Trump’s record on veterans in a national press conference call, and in calls and interviews in battleground states, including Florida, Pennsylvania, Virginia, Colorado and New Hampshire.
Those surrogates hit Trump over his questioning of Arizona Sen. John McCain’s war hero status, accused him of scamming veterans through his scandal-plagued Trump University and lambasted him for failing to support the latest version of the post-9/11 GI Bill.
“Donald Trump has never spent one minute of the kind of service that Sen. McCain has served for his country. So for him to disparage that service is despicable and disgraceful,” said John Douglass, a retired Air Force brigadier general, on a conference call featuring Florida veterans hosted by the Clinton campaign Tuesday.
RELATED: First on CNN: Clinton campaign’s plans to subvert Trump’s veterans press conference
That push came on the heels of the Clinton camp’s effort last week to knock Trump off-message and discredit the presumptive Republican nominee by hammering him over a series of comments he made about the 2008 financial crisis.
As for the effectiveness of Clinton’s new strategy, the early results are mixed.
Ahead of Trump’s planned news conference Tuesday detailing his $5.6 million in charitable contributions divvied up among veterans’ organizations, Clinton’s campaign was well-prepared to highlight Trump’s past disparaging remarks about veterans, his Veterans Administration reform plans, and his months-long refusal to fully account for the funds he raised in January for veterans’ charities.
Trump, meanwhile, turned his news conference into a battle with the political press — he attacked an ABC News reporter as “a sleaze” — and political reporters overall as “among the most dishonest people that I have ever met.”
Clinton spokesman Brian Fallon told The Washington Post that her campaign can win news cycles on the local and state levels — even if Trump remains the star of national newscasts. Fallon said Trump’s wall-to-wall coverage might not prove helpful, anyway.
“He is definitely taking the approach that all publicity is good publicity. But he commands the news coverage because of his willingness to traffic in offensive statements, demeaning and insulting comments, and outrageous conspiracy theories,” Fallon said. “That is a recipe for commanding attention. But it is not a strategy for making inroads with the key voter groups he needs in order to improve his standing for the general election.”

Charity on Trump list linked to telemarketer accused of deception