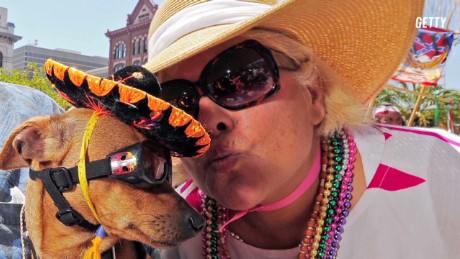 (CNN)If you didn’t already know, Cinco de Mayo is a bigger deal in the United States than in Mexico. Here, this unofficial holiday is almost as popular as, oh, St. Patrick’s Day — which means it’s unfortunately become a drinking holiday. So much so that it’s been nicknamed, Cinco de Drinko and even Gringo de Mayo.

Actually, Thursday, commemorates Mexico’s victory against the French during the Battle of Puebla in 1862, and according to research by UCLA professor David Hayes-Bautista, it isn’t a Mexican holiday at all but rather an American one created by Latinos in California during the Civil War.
Cinco de Mayo history: Not exactly a Mexican import
In a perfect world, folks would use the day as an opportunity to learn more about Mexican history and culture, but the sea of margarita and nacho specials might be too distracting for some. So, in the spirit of not completely raining on everyone’s parade, we’ve compiled a list of Cinco de Mayo faux pas to avoid so as not to offend others and/or embarrass yourself.

Today is not Mexico’s independence day (which is September 16) so you should refrain from treating it as such. You will rarely see a Mexican in the United States or in Mexico — outside of where the battle actually happened — acknowledge, let alone celebrate, the holiday. So simmer down.

2. Resist the urge to wear sombreros and fake mustaches because, well, stereotypes

While it may seem like all fun and games, these costumes essentially reduce cultural and traditional costumes to a caricature. Take it from the Penn State sorority sisters who learned the hard way after donning ponchos during one of their “Mexican-themed” parties. (Not to mention the offensive signs they made to accompany their costumes.)

3. Enjoy traditional Mexican libations, but don’t use Cinco de Mayo as an excuse to get brutally inebriated

There’s a thin line between enjoying a drink special with friends and running amok after taking 13 shots of tequila. Plus, blacking out drunk is sort of disrespectful given Cinco de Mayo is in remembrance of a battle, meaning lives were lost. In other words, keep it classy, folks.

Any attempts to awkwardly “connect” will likely come off as cheesy and empty. And, please don’t ask anyone to “speak Spanish” for your amusement because that’s just disrespectful. Plus, not all Latinos speak Spanish so you may be striking another nerve.

5. Don’t plan a trip to Mexico to celebrate a ‘real’ Cinco de Mayo

Outside of the state of Puebla in Mexico, the holiday isn’t really celebrated at all. Even the celebrations in Puebla are much more tempered and family oriented. If you’re genuinely interested in Mexico, head to San Diego, San Antonio or even Mexico City on September 16 and indulge in an authentic experience in all things Mexican.