Charity on Trump list linked to telemarketer accused of deception 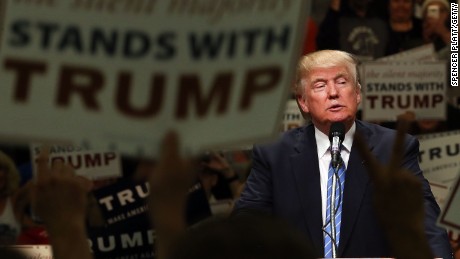 New York (CNN)One of the veterans’ charities receiving money from the Donald J. Trump Foundation is also linked to a Michigan telemarketing firm that’s been accused of deceptive statements by the Minnesota attorney general.

Two companies which solicited donations for the Foundation for American Veterans, based in suburban Detroit, were named in a civil suit filed last week by the Minnesota attorney general’s office, according to a press release.
The lawsuit, the press release said, was filed against Associated Community Services and its affiliate, also based in Detroit, and accused the company of sending false “pledge reminders” to donors and calling potential donors, in one case 42 times in a four-month period.
On its federal 990 income tax filing for 2014, the Foundation for American Veterans lists donations of more than $8 million but fundraising and other expenses nearly matching the contributions received. The charity lists nearly $2 million in “grants” to veterans but doesn’t specify when or where.
READ: Trump will give $1 million to Marine charity, but there are other discrepancies
According to Minnesota Attorney General Lori Swanson, Associated Community Services’ telemarketers told potential donors in phone calls that they represented had made pledges to the charity when in fact they did not. In another instance, the telemarketer told a donor that they had previously pledged $20 to the foundation when it wasn’t true. In all, the office said, Minnesotans donated nearly $1 million to the charity since 2011.
It’s not the first time Associated Community Services has been in trouble with state regulators.
The Michigan attorney general issued a cease-and-desist order against a firefighter’s charity earlier this year after Associated Community Services allegedly use “deceptive and false” information in raising money.
CNN received no response when it emailed and telephoned Associated Community Services or from Bob McDonald, president of the Foundation for American Veterans. CNN has also reached out to all of the charities listed Tuesday on the Trump website as having received donations. About one-quarter have responded — all said they received the donations Trump listed but some only received the money in the last week to 10 days.
A spokesman for the Bob Woodruff Foundation in New York City confirmed receipt of a $75,000 donation last week and that the charity was “surprised” to have received it. A spokesman for the National Military Family Association confirmed receipt of a $75,000 donation. When asked if the Trump Foundation had vetted the charity, the spokesman said no.
“They just wanted to confirm our name and address was the same as it was on the internet,” the spokesman said.
A spokeswoman for the Mission Continues, a St. Louis-based charity, confirmed a Trump Foundation donation of $75,000 and it was given last Wednesday.
The Trump campaign did not immediately respond to a request for comment.

32 delicious condiments we can’t live without