Bernie Sanders is in a very weird position 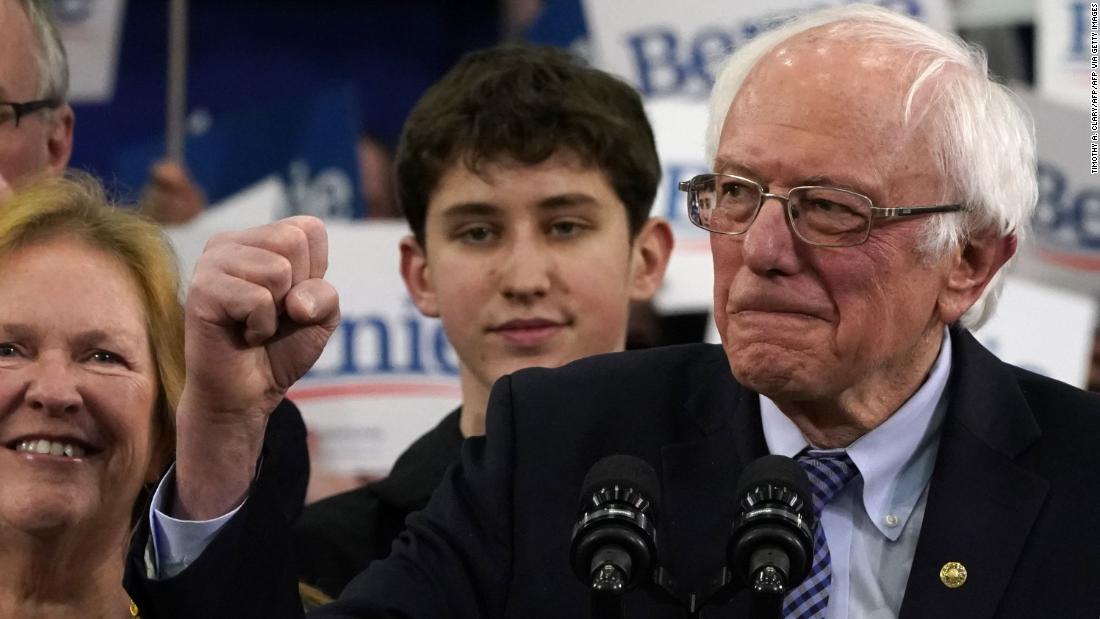 (CNN)Welcome to 2020! With just 6 days until the Nevada caucuses and 13 days until the South Carolina primary, the Democratic primary is in full swing. Every Sunday, I outline the 5 BIG storylines you need to know to understand the upcoming week on the campaign trail. And they’re ranked — so the No. 1 story is the most important of the coming week.

5. Tom Steyer matters!: While the other billionaire in the 2020 race (more on that below) is getting most of the attention these days, it’s Steyer who is in double digits in recent polls in Nevada and South Carolina.
Those numbers are largely the result of heavy ad spending by Steyer in both states. To date, Steyer has spent almost $180 million on TV ads, according to CNN’s David Wright. That’s second only to former New York Mayor Michael Bloomberg.

Now that all of the candidates including frontrunners like Bernie Sanders and Pete Buttigieg have turned their full attention to Nevada and South Carolina, it’s an open debate as to whether Steyer’s support stays with him or not.
And, if Steyer starts to leak support — because voters don’t really see him as someone who can win — where does it go? To a single candidate regarded as more viable? Or to a series of candidates — each picking up a small-ish amount of Steyer backers?
Of course, it’s also possible that Steyer voters in Nevada and South Carolina are hardcore Tom-heads (or something) and they are going to stick with him no matter what.
4. Elizabeth Warren, overlooked?: The Massachusetts senator is a bit of a forgotten candidate these days — following a third place finish in Iowa and a fourth in New Hampshire.
And while Warren’s path to the nomination seemed to rely on a victory in one of those two states, there are signs of life even after her less-than-impressive showings.
She raised $6 million since Iowa, a sign that her supporters aren’t ready to walk away just yet. And she’s holding on to third in new Nevada polling, above both former South Bend, Indiana, Mayor Pete Buttigieg and Minnesota Sen. Amy Klobuchar.

CNN Original Series “Race for the White House” captures the tension and drama of high-stakes presidential elections throughout history. Catch all-new episodes Sundays at 9 p.m. ET/PT and follow along on social media with #RaceforWH.

While there’s still six days before Nevada votes, a third place finish there — coupled with her latest fundraising numbers — should allow her to stay in the race through South Carolina and the Super Tuesday states on March 3.
And, given the large number of uncertainties still at play in this race — scroll down — there’s still some reason to believe Warren’s doubters have written her political obituary just a little too quickly.
3. The Bloomberg oppo: Know how you can tell that former New York Mayor Michael Bloomberg’s Democratic primary opponents are starting to get very worried? A whole lot of opposition research is emerging about past things he has said and done that might not sit well with voters.
There’s his support for “stop and frisk” — and repeated comments he made defending that policy, which is widely regarded as overly punitive for black and Latino men. (Bloomberg has apologized.) There’s his support for “redlining,” a deeply biased policy that led banks not to make mortgage loans in low income, heavily minority areas. There’s the many, many crude and sexist remarks allegedly attributed to Bloomberg during his years building his business.
And there will be more. Lots more. (CNN’s KFile reported on a clip from 2010 in which Bloomberg talked down the Affordable Care Act and said it was “another program that’s going to cost a lot of money.”)
Some of these quotes and stances are things Bloomberg had already had to deal with during his three successful runs for mayor. Others are new — dredged up by the top-notch reporters and opposition researchers covering a presidential campaign.
But, either way, it remains to be seen whether this spate of negative news stories slows the momentum that Bloomberg’s massive ad spending has created. If his numbers don’t take a hit, his opponents should be very, very nervous.
2. Wither Biden?: The former vice president and one-time frontrunner in this race, Joe Biden’s chances in the race are now hanging by a string following a fourth place finish in Iowa and a fifth in New Hampshire.
Biden and his side continue to insist that everything is totally cool because black and Hispanic voters haven’t, well, voted yet. But, polling data in Nevada suggests Biden is running behind Sanders and that his lead in South Carolina is not what it once was. Plus, there’s already lots of chatter that Biden’s support in South Carolina is rapidly eroding.
The question for Biden over the six days before Nevada — and the 13 days before South Carolina — is whether he can somehow bend the storyline from “he’s done for” to “there’s still a long way to go.”
No one likes to vote for someone they think can’t win — and Biden’s performance in the first two states has left that scent lingering on him. A strong second in Nevada might help but if he drops to third or worse in the Silver State caucuses, that will likely doom him even in his longtime South Carolina firewall.
1. Bernie, the frontrunner: The Vermont democratic socialist won the popular vote in Iowa (while narrowly losing out to Buttigieg among delegates) and claimed victory in the New Hampshire primary. Plus, per above, polling suggests he is the favorite going into Nevada next weekend.
Add that to his seemingly infinite capacity to raise money from his small-dollar, online donor base — $25 million raised in January alone! — make him the new frontrunner in the Democratic race.
That’s a very different role than Sanders has played literally (Chris Traeger voice), his entire political life. Sanders has always been some combination of scrappy underdog and Don Quixote charging at windmills.
Now, though, he’s the person most likely to lead the Democratic Party against President Donald Trump this fall. There’s two things to think about there: 1) How comfortable or uncomfortable is Bernie in that role and 2) How hard will establishment figures within the party fight to knock him out of that role (and will it work)? (Ok, that was three questions.)
Make no mistake: Sanders is in uncharted waters here. Does he sink or swim?