US forces provide support to clear militants from Marawi, but Manila insists there are no American boots on the ground 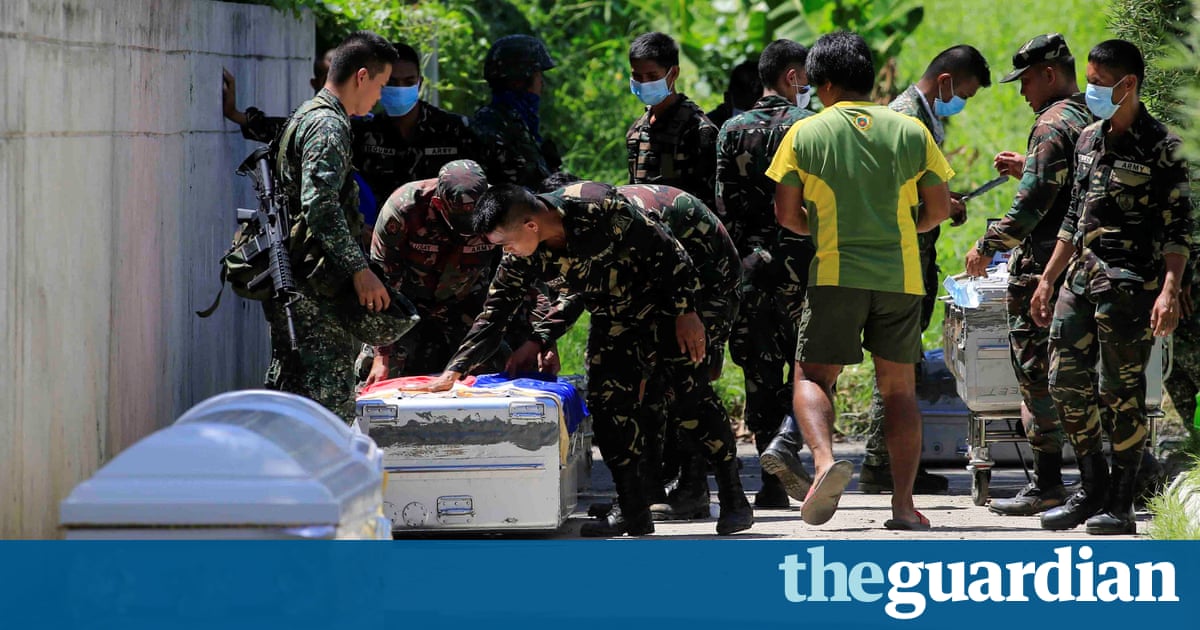 Bomb blasts have rocked Marawi City in the southern Philippines as the national flag was raised to mark independence day, almost three weeks after hundreds of Islamist militants overran the town and hunkered down with civilians as human shields.

Rescue workers, soldiers and firemen sang the national anthem and listened to speeches as three OV-10 attack aircraft darted through the cloudy sky on Monday, taking it in turns to bomb areas where fighters were still holed up.

To our Muslim brothers there, we want to tell them to stop their meaningless fight because we are all Muslims, vice-provincial governor Mamintal Adiong told the gathering.

Flag ceremonies are normally performed twice a week, but this was the first in the mainly Muslim town since 23 May, the first day of the siege, when the militants killed and abducted Christians, and torched a cathedral.

Almost the entire population of about 200,000 fled from the lakeside town on the Philipppines southernmost island of Mindanao. But beyond the checkpoints fencing it off there are still some 500-1,000 civilians trapped or being held hostage.

As of Saturday the number of security forces killed in the battle for Marawi stood at 58. The death toll for civilians was 20 and more than 100 had been killed overall.

The seizure of Marawi by fighters allied to Islamic State, including some from the Middle East, has alarmed south-east Asian nations which fear the ultra-radical group on the backfoot in Iraq and Syria is trying to set up a stronghold on Mindanao that could threaten their region.

Philippines president Rodrigo Duterte said on Sunday he had not expected the battle for Marawi to be as serious as it has turned out, adding it had now emerged that Baghdadi himself, the leader of the ISIS, has specifically ordered terroristic activities here in the Philippines.

Duterte did not say how he knew that Islamic State leader Abu Bakr al-Baghdadi, whose movement is commonly referred to as ISIS, had given instructions for the attack on Marawi.

Foreign Affairs Minister Allan Peter Cayetano said in an independence day speech in Manila that the militants had planned to take over at least two or three cities in Mindanao.

Their plot was foiled because troops made a preemptive raid on Marawi to capture Isnilon Hapilon, leader of the Abu Sayyaf group and Islamic States emir of south-east Asia.

We want to coordinate very well with Indonesia and Malaysia so they wont also suffer in the hands of extremists, he said.

But the president knew at the start of his term that, as the allies become more successful in Syria and Iraq, they (Islamic State) will be looking for a land base, and Indonesia, Malaysia and the Philippines will be a potential target to them.

Washington said at the weekend it was providing support to the armed forces of the Philippines to clear the militants from pockets of Marawi. Manila said this was technical assistance and there were no US boots on the ground.

A US official, speaking on condition of anonymity, said support included aerial surveillance and targeting, electronic eavesdropping, communications assistance and training. A US P-3 Orion surveillance plane was seen over the town on Friday.

The cooperation between the longtime allies in the battle was significant because Duterte, who came to power a year ago, has taken a hostile stance towards Washington and has vowed to eject US military trainers and advisers from his country.

The Pentagon has no permanent presence in the Philippines but for years has kept 50 to 100 special forces troops in the south of the country on rotational exercises.

Duterte said on Sunday he had not sought support from Washington to end the siege and had not been aware that US special forces were assisting.

Cayetano said the government did not need to be involved in decisions on US participation because of a bilateral visiting forces agreement and, with events happening real time, such matters are left to the armed forces and defence department.

Crisps, keyboards, pens how do you treat an unusual phobia?