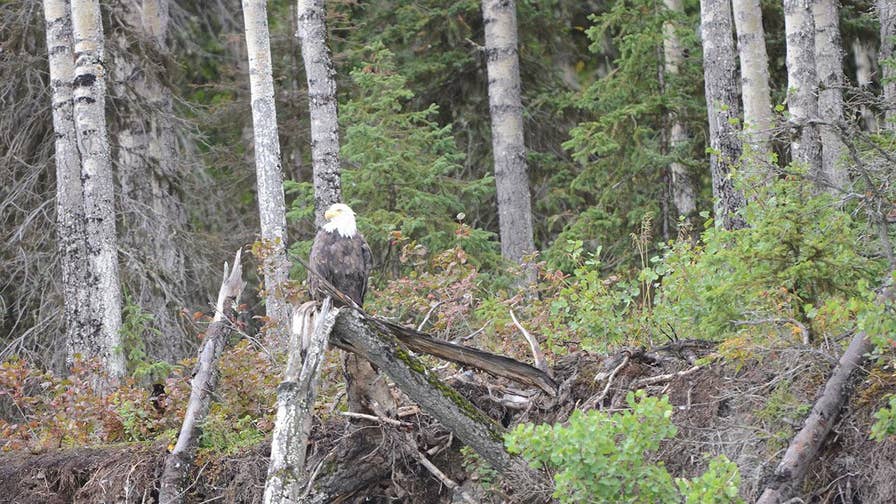 The bald eagle’s comeback is frequently regarded as one of the greatest conservation stories in North American history, bouncing back from under 500 eagle pairs in 1963.

JACKSON, Ga. –  Longtime wildlife biologist Jim Ozier unties and then boards a small boat on Lake Jackson, an hour south of Atlanta. With binoculars hanging from his neck, Ozier starts the engine to cruise to a 5-year-old bald eagle nest, towering just on the edge of the Georgia Power-owned body of water.

Ozier’s routine to monitor bald eagle populations has been consistent – keeping a keen eye while searching for our nation’s symbol by air and water. It’s the experience for Ozier that has transformed dramatically.

“I can remember getting out of high school and just wondering if I would ever see a bald eagle,” Ozier recalled.

There was only one known successful nest in the Peach State during the 1970s, according to the Georgia Department of Natural Resources.

Ozier said he never could have predicted “go[ing] from there to now – [where] there’s probably not a place in Georgia that’s not 20 to 30 miles from a bald eagle nest.”

The bald eagle, the nation’s symbol, was once at the brink of extinction. But it is making a huge comeback thanks to conservation efforts across the country to save them. Experts call it one of the greatest conservation stories in North American history, making a comeback from fewer than 500 eagle pairings in the 1960s.

Wildlife biologists ride to the edge of Lake Jackson to check on a five-year old eagle nest.  (Fox News)

The nationwide count has since soared to literally more than 30 times that – the U.S. Fish and Wildlife Service estimated 16,048 pairs in 2009.

It’s difficult to find accurate national data on bald eagle populations in more recent years because many states significantly scaled back their surveying efforts after the bird was removed from the Endangered Species List in 2007.

Also on the boat near Atlanta was fellow wildlife biologist Bob Sargent, who recently succeeded Ozier to oversee surveying duties.

“This species, our national symbol, since 1782, was on the brink of extinction, and to see it come back the way it has, it’s an inspiring story all the way around,” Sargent said.

Numerous states across the country produced groundbreaking counts over the last several years – including Florida, with 1,568 active nesting territories in 2016; Wisconsin, with 1,590 in 2017 and Arizona with 69 in 2018.

“The bald eagle’s population growth in Arizona and across the nation is a testament to the successes of wildlife conservation efforts,” said Kenneth Jacobson with the Arizona Game and Fish Department.

Ozier and Sargent agreed, pointing to the country’s ban on DDT use (a harmful pesticide) in 1972, the Endangered Species Act and increased public awareness.

No nest has gotten more attention in Georgia than one sitting adjacent to Berry College’s athletic department.

Dr. Renee Carleton, an associate professor of biology, said multiple cameras provide “people who don’t normally have a connection to nature” with a close-up view.

Carleton added that the live feed attracts viewers from across the world, bringing well-deserved attention to the magnificent species.

Sargent told Fox News he frequently gets phone calls from giddy residents who are awestruck after catching their first glimpse of a bald eagle.

“When they get aloft, it seems as though they can soar for half the afternoon, effortlessly,” Sargent said.

He called it inspiring, patriotic and a sight that never diminishes in magnificence.

After three straight years of 200-plus recorded active nesting territories, the Georgia DNR decided to cut its bald eagle surveying efforts in half.

A bald eagle sits along the Kenai River in Alaska.  (Craig Ikeda)

Georgia’s highest populated county hit a new record with a tally of 27 nests in 2018, so it is highly possible the Peach State would have seen a similar state-wide increase should the DNR have continued full-fledged surveillance.

Despite the surveillance reduction, which freed up money for conserving other species like the peregrine falcon, Sargent promised our nation’s symbol will always remain a top priority in the state.

Today, bald eagles continue to be protected under the Migratory Bird Treaty Act and the Bald and Golden Eagle Protection Act, which prohibit anyone without a permit from taking the bird’s parts, nests and eggs.

Wednesday commemorated 236 years with the bald eagle marked on the official seal of the United States.

Emilie Ikeda is a multimedia reporter based in Atlanta.