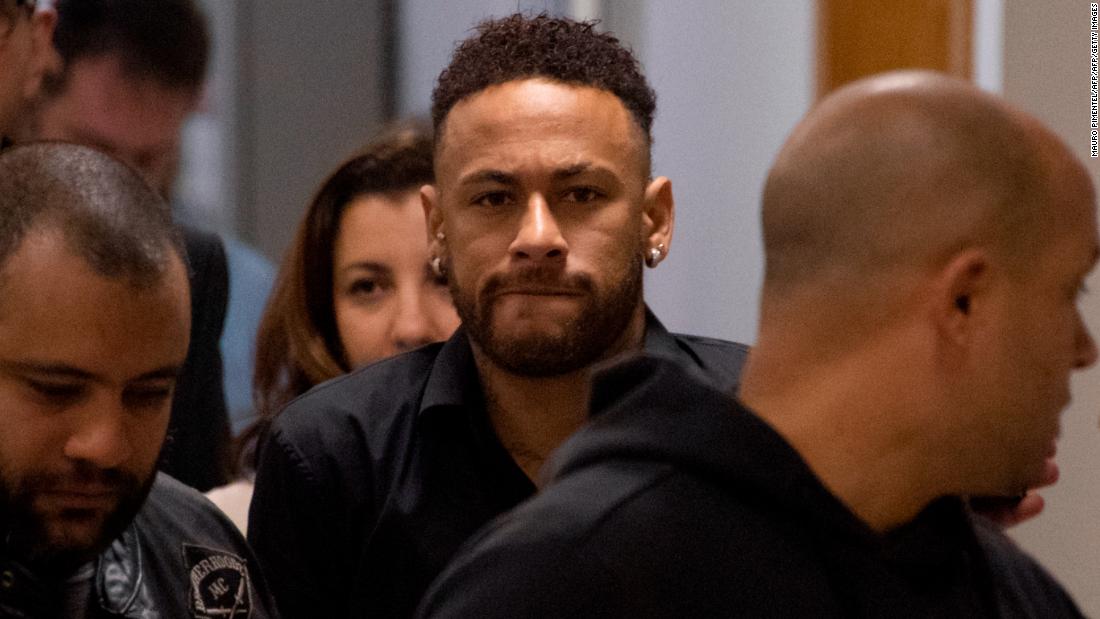 (CNN)The lawyer for the model Najila Trindade, who accused Brazilian footballer Neymar of rape and assault, defended his client in an interview with CNN, calling her a victim “who, until proven otherwise, has been raped.”

The soccer star denies the allegations that he raped and violently assaulted her in a Paris hotel room on May 15.
On Friday, Trindade fainted and hit her head while being questioned by police in relation to the alleged incident, according to Garcia.
He accused members of the press and the public of hostility as he carried Trindade to a police car after the interview. 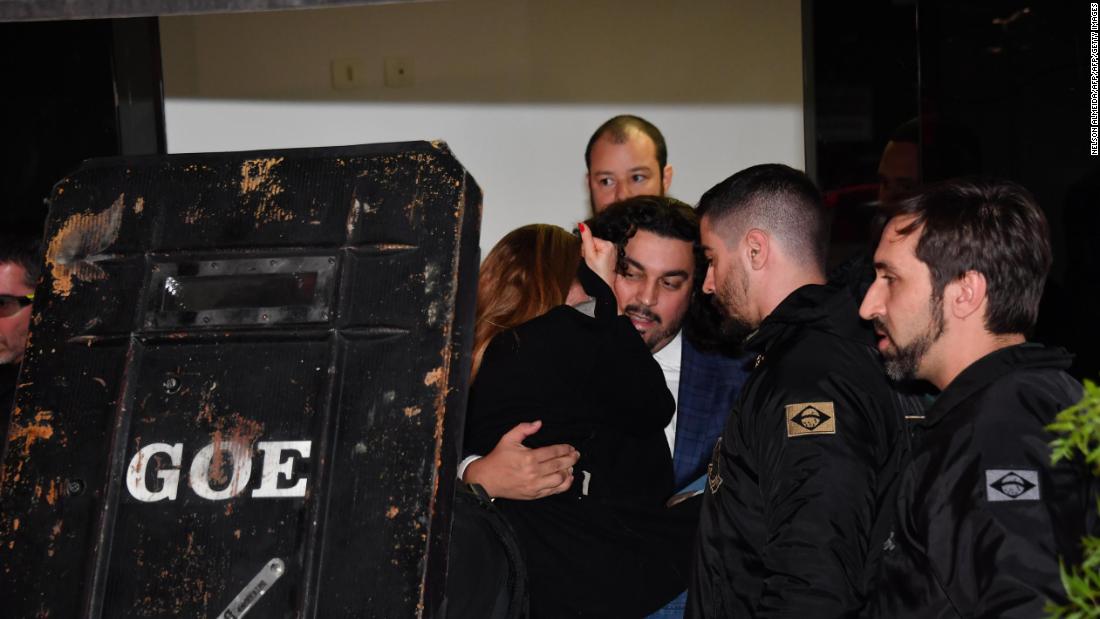 The lawyer also denied allegations that he was having an affair with Trindade. “My involvement with my client is only in the criminal sphere to defend her,” Garcia said, adding that his client was taken to hospital, where she received medical attention and was released after an hour.
“This girl needs help. Whether or not the rape happened, and I believe in her version, it does not take away the question that she needs help. It is a lack of humanity that I saw today.”
CNN sought comment from Neymar’s lawyers. “The police investigation procedure is kept confidential and it is not possible to comment on the respect of its content,” Neymar’s spokeswoman Day Crespo said.
Neymar is facing two separate police investigations in Brazil, according to Rio de Janeiro’s Police press office.
One investigation is being conducted by Sao Paulo police, where Trindade filed a police report on May 31 claiming that the Paris Saint-Germain player assaulted and raped her earlier that month.
Neymar has denied the accusations in an Instagram video, saying: “I was induced to do it, it was something that happened, it was a trap and I ended up falling for it, but that’s a lesson from here on out.” His representatives have said he is the victim of extortion.
The video has since been taken down, but the second police investigation focuses on cybercrime given Neymar took to Instagram two days after the report was filed to deny the accusation and share sexually charged text exchanges that occurred between the two after the alleged rape took place, in order to prove their interactions were consensual.
The texts included sensitive photos of the model. Posting intimate photos of another person is a crime under Brazilian law. Rio de Janeiro police have opened the investigation, because Neymar showed the photos on social media while he was in Rio de Janeiro training with the Brazilian national team.
Neymar gave his testimony Thursday at the police station in Rio de Janeiro regarding the cybercrime case, according to his defense attorney. His lawyer, Maria Fernandes, confirmed to Reuters that Neymar had given a statement to police. 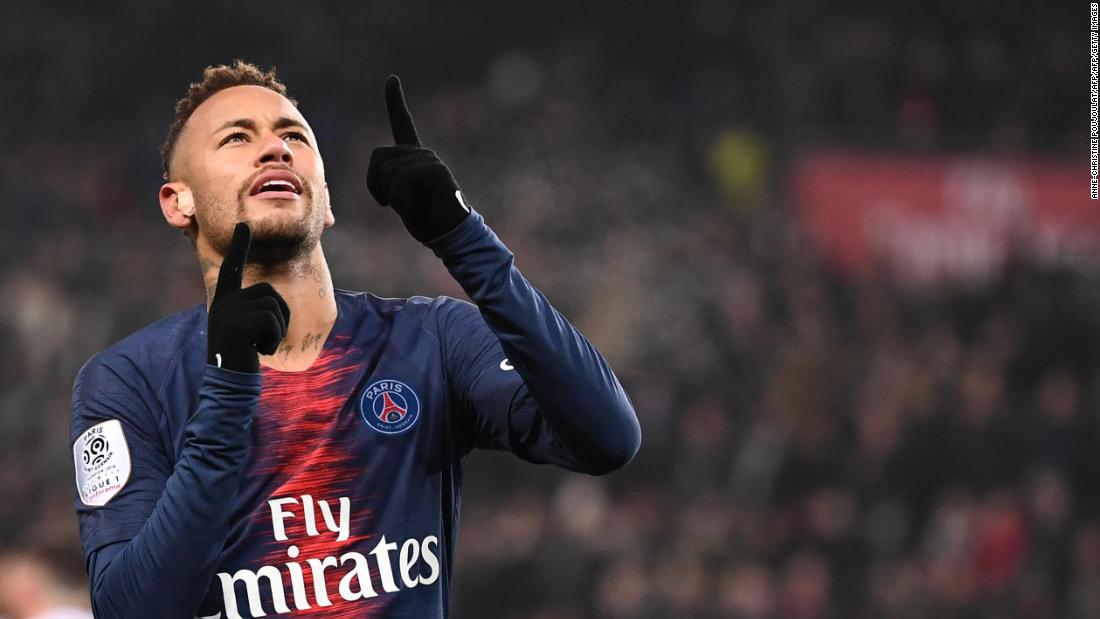 Neymar, who was in a wheelchair after suffering an ankle injury while playing for Brazil earlier this week, was wheeled to the entrance of the police station through hordes of reporters before standing up and entering on crutches.
Speaking outside the police station, Neymar was quoted by Reuters as saying: “I appreciate the support and all the messages that the world has sent, my friends, my fans, that the world is with me. I want to say thank you for the well wishes, and say that I have felt very loved. Thanks for everyone’s well wishes.”
Lawyer Fernandes added: “He made the point of coming as soon as he could to give a statement, to clarify everything that needed to be clarified.”
The testimony has nothing to do with the rape allegations which allegedly took place in Paris.
“We are absolutely confident that we will prove the innocence of our client. The process was thorough, but he provided all the clarifications that were to be provided,” said Fernandes.
CNN has contacted Neymar and his club Paris Saint-Germain for comment on the allegations made by Trindade in the interview, but has yet to receive a response.
The Paris prosecutor’s office confirmed to CNN Friday that there is still no investigation opened about the case in France.
Meanwhile Nike says it is “very concerned” by the rape allegations against Neymar, casting doubt over its partnership with the world’s most expensive soccer player.
“We are very concerned by the recent allegations and will continue to closely monitor the situation,” Nike said in a statement sent to CNN.
Follow @cnnsport
Speaking on Wednesday to Brazilian network SBT TV, Trindade says she contacted Neymar on Instagram, intent on pursuing a sexual relationship with the soccer star.
“There was a sexual intent, it was a desire of mine. I think that was clear to him,” she said. 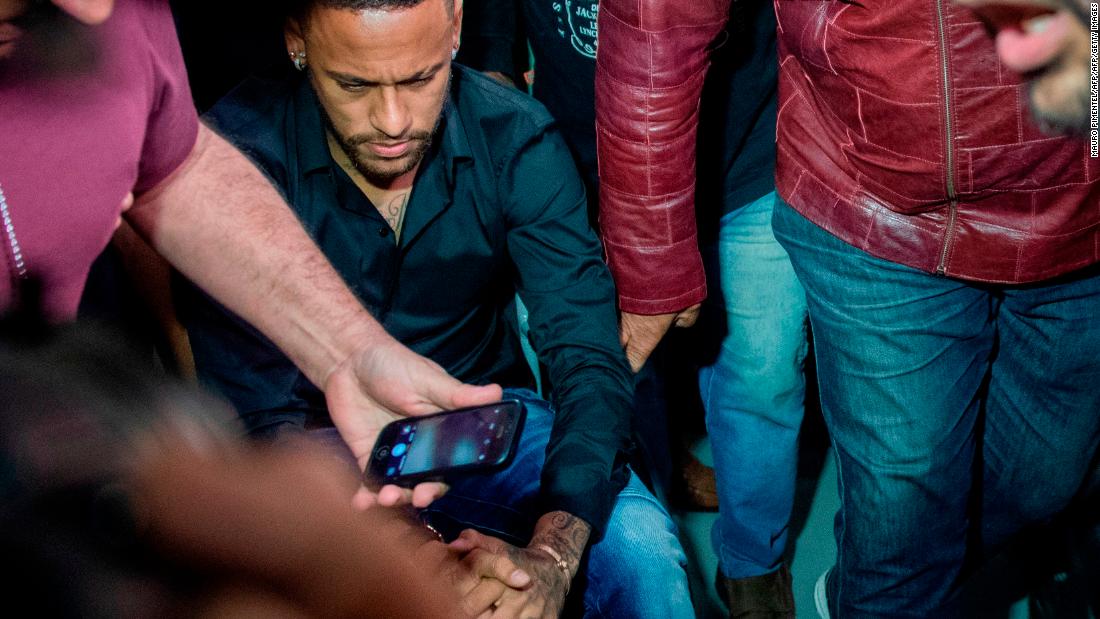 Trindade says she met Neymar at the Hotel Sofitel Paris Arc du Triomphe, after she says he paid for her to travel to Paris.
“I had the desire of being with Neymar and when I got there everything was good, everything was fine, the messages, I was going to succeed, do you understand? But when I got there he was aggressive, totally different from the guy I met through the texts.”
“I don’t think that just because I was keen to be with him that he had the right to do that to me.”
Neymar ended his Instagram video showing flirty and at times explicitly sexual texts and intimate photos that he said were exchanges with his accuser even after the alleged incident. The exchanges began in March, according to the time stamp on the texts.
“I will expose everything, expose all the conversations I had with the girl, all our moments, which are intimate … but it is necessary to open and expose them to prove that nothing really happened,” he said.
When asked about why she continued to message Neymar after the alleged rape, Trindade said: “Initially, I wasn’t able to react, due to the trauma.
“And then I knew that if I didn’t speak to him normally, pretending that I hadn’t understood what had happened, he wouldn’t speak to me again and I wouldn’t have how to prove what he had done to me.”
Visit CNN.com/sport/football for more news and features
According to Forbes, Neymar is ranked fifth in the list of the world’s highest-paid athletes. Forbes says that Neymar earns $90 million a year with $17 million coming from endorsements, from some of the world’s biggest brands.
He is the first soccer player to have his own Nike brand of shoes.

Why No One Likes You When Youre Drunk, Based On Your Zodiac

Carls Jr. Is Introducing New Classic Floats During Its 100 Days Of Summer