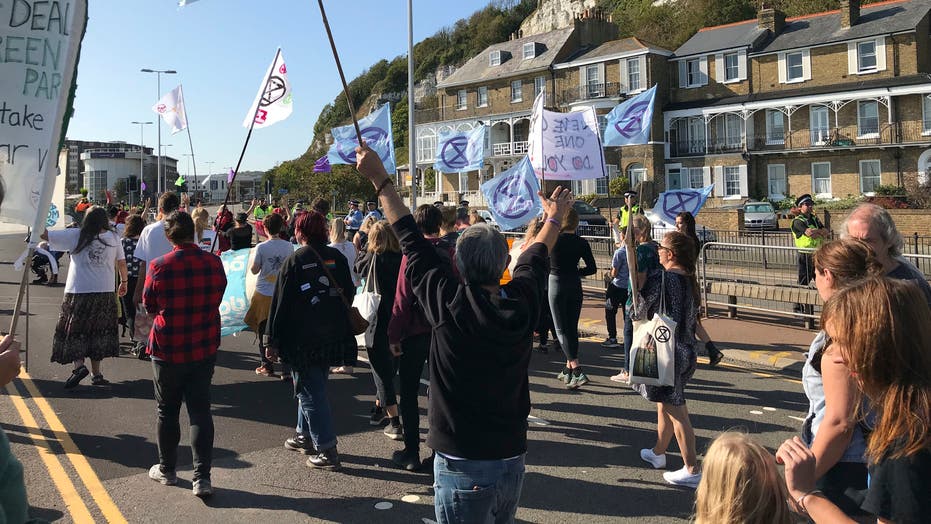 Extinction Rebellion protesters occupy one side of a dual carriageway at the port of Dover, England, Saturday Sept. 21, 2019. Traffic around the Port of Dover, England’s major sea connection with France, has been disrupted as a result of a protest by environmental activists. Activists from Extinction Rebellion said their protest around the port is intended to “highlight the vulnerability of the U.K.’s food supply in the face of the ecological and climate emergency.” (Michael Drummond/PA via AP)

One of the men arrested for attempting to block roads near the main ferry terminal in Dover was a 91-year-old, who said upon his arrest: “It’s my generation that’s caused all this trouble, so here I am.”

Five others, also believed to be elderly, were arrested after sitting down and blocking traffic on the A20 road leading into the English town, the outlet reported. One of the activists, Emma Arnold, posted on Twitter that she was issued a “breach of public order warning” by the police for walking with her camera, adding that arrests were highly likely.

PAIR OF UNDERWEAR BELONGING TO EVA BRAUN SELL AT AUCTION FOR MORE THAN $4,600

A spokesman for the Extinction Rebellion told the Independent the group made sure the blockade didn’t “cause any disruption to vital supplies” needed for residents, such as medicine.

“Extinction Rebellion appreciates the blockade will directly affect ordinary people and businesses, but we feel the action is necessary in order to call the government to action,” the spokesman added.

The Port of Dover, the focal point for the blockade, told the Independent it was “working closely with Kent Police to ensure as minimal disruption as possible.”

“The force is grateful to everyone who cooperated with efforts to ensure the rights of the protesters, and the wider public, were respected and it is pleasing we haven’t seen levels of disruption greater than what could be reasonably expected,” Andy Pritchard, Kent Police’s chief superintendent, told the Independent.

Dover is the second busiest port in England, with 11.7 million passengers and 22 million cars passing through it in 2017, according to the Port of Dover.

David Aaro is a Freelance Reporter at Fox News Digital based in New York City.